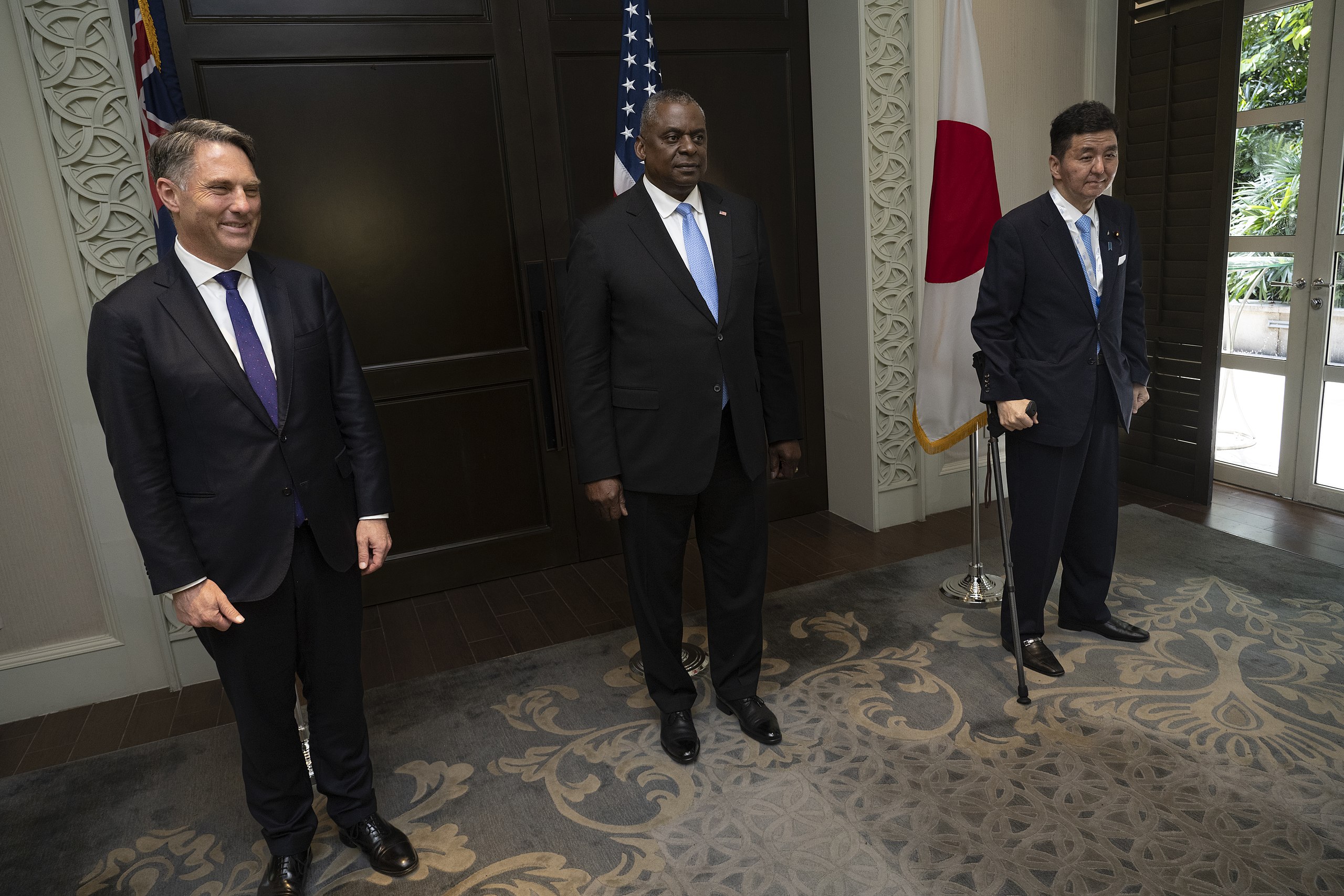 US Defense Secretary Lloyd Austin met his Japanese and Australian counterparts in Singapore on Saturday 11 June. Austin posed for photos with the Australian Defense Minister, Deputy Prime Minister Richard Marles and Japanese Defense Minister Nobuo Kishi. The trialogue of defense ministers was the tenth meeting of representatives of these countries. As reported in a communiqué issued by the US Department of Defense, representatives from the US, Australia and Japan expressed their vision to strengthen the regional security environment and committed to working together to take concrete, practical steps to ensure stability and prosperity in the Indo-Pacific region. The meeting on the sidelines of the Singapore summit is a continuation of the White House’s strategy to balance spheres of influence in the Indo-Pacific. The talks also resulted in a decision to tighten cooperation between the defense ministries of the three countries themselves, which definitely set the tone of the response to the growing tension in the South China Sea region.[1] Another result of the negotiations was Marles’ visit to Japan a few days later.

An important voice of the representatives of the three countries was a firm opposition to the Chinese plans to violently disrupt the status quo in the Taiwan Strait. Defense ministers also announced joint military exercises, Rim of the Pacific 2022. RIMPAC 2022 maneuvers will be taking place at the end of June and will be an opportunity to participate in the monumental demonstration of the anti-Chinese alliance’s strength at sea. They will be attended by countries associated in the QUAD format and key countries in the immediate vicinity of the South China Sea region. It is about Indonesia, Philippines, Malaysia, Brunei. In total, military units from 26 countries will take part in the exercises taking place in Honolulu and San Diego from June 29 to August 4. 38 surface ships, four submarines and 170 aircraft were included in the exercise. About 25,000 people will take part, including ground troops from nine countries.

On the sidelines of the IISS summit in Singapore, Lloyd Austin met his Chinese counterpart, Wei Fenghe, for the first time. The talks were held on Friday, June 10, and the main message of the meeting was to strive for stabilization in US-Chinese relations. This stabilization is to manifest itself in responsibility in bilateral relations and prudence in the management of communication channels on both sides. The Minister of Defense of the People’s Republic of China, however, did not stop at diplomatic words, adding that any improvement in relations between the two countries may be conditioned by a change in the behavior of the United States. The Chinese representative expected the US to stop “slandering China” and “interfering in internal affairs” with the PRC. The tone of the Chinese representative was confusingly similar to the speech of the PRC Foreign Minister Wang Yi during last year’s US-China summit in Alaska.

Fenghe’s words met with an immediate reaction from Austin, who pointed to the provocative tone of these words and the destabilizing effect of the People’s Republic of China’s actions in the South China Sea region. The first meeting of US and PRC representatives at this level left many unknowns in the context of further developments in the region.

Due to the lack of clear declarations on both sides, the rebellious narrative led by the representatives of the government in Beijing, and the lack of drawing conclusions in the face of the consistently shifted “red line” by China, further escalation in the territorial claims of the “Middle State” can be expected. At present, the fight between the United States and China will take place in the field of allied negotiations with countries located in the Indo-Pacific region. It is about China’s growing influence in India and its still significant dependence on Russian military. Despite geopolitical tensions between India and China, and despite India’s ban on over 100 Chinese apps, Chinese investments in India’s startup ecosystem have risen to over $ 14 billion in 2021. Everything seems to indicate that the growing economic position of China will force India to position itself towards common coexistence, although China is India’s main competition in the region. As time goes on, it is expected that both superpowers will put pressure on Narend Modi’s government to take more on one of the sides.

A similar example of countries participating in the game of both powers are also: Solomon Islands, the Philippines, Indonesia, Malaysia and Brunei. It is for this reason that some of them have been included in the upcoming RIMPAC 2022 maneuvers. The Joe Biden administration, seeing the shaky balance of power in the already existing anti-Chinese coalition alliances, not only intensifies its presence at leading political summits, but also draws more countries into its game. An example of this is the growing cooperation of the USA with South Korea, whose president Yoon Suk-yeol has strongly sided with the countries of the Free World and was invited to the QUAD summit in Tokyo, which took place in May 2022. The Indo-Pacific is therefore in the eyes of the American administration and is becoming an increasingly important area of political action in order to maintain the status quo in the region.