An underestimated threat. How Russia and China influence the CEE?

We invite your the Warsaw Institute’s first online roundtable! The experts debate “An underestimated threat. How Russia and China influence the CEE?” shall take place on Monday, September 14th at 6:00 PM. 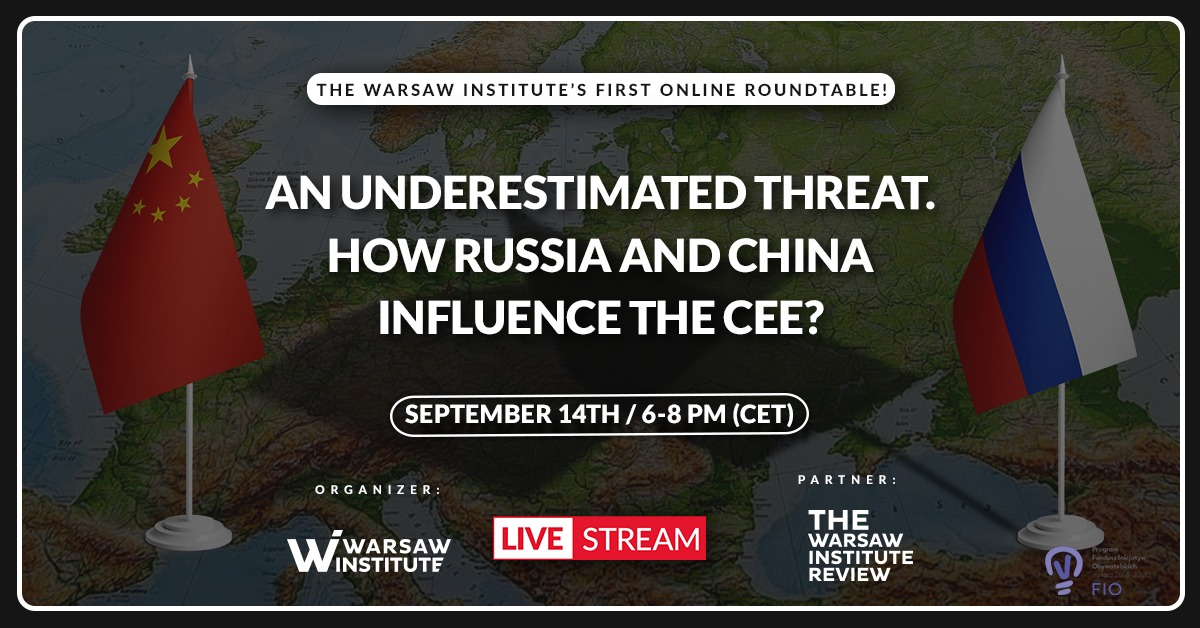 Ever since the 2008 Russian invasion of Georgia we have been steadily observing an increasingly aggressive actions that Russia undertook against its close neighbours. The 2014 annexation of Crimean Peninsula from Ukraine finally clarified the ongoing situation: the countries of the CEE could never feel safe from Russia. Unfortunately, the Russian ambitions to assert control and manage to influence the domestic politics of other countries now reaches far beyond the borders of its own country and deep into Europe. The latest cases of Sergei Skripal and Alexei Navalny have shown the West that Russia is not scared to pursue its interests even if it involves openly aggressive actions far away from the Motherland.

However, only until recent times Russia seemed to be the only real threat to the countries of the CEE region. However, these days all of us here witness the birth of a new enemy that although poses a non-military threat should still be considered dangerous – the People’s Republic of China. Beijing is different to Moscow in that it handles its policy wearing ‘velvet gloves’. China constantly increases its market presence in the region, making the CEE more and more depend on their own economy – all of this is done quietly and with support of many European politicians. Beijing’s expansionist tendencies became clear to many during the first months of COVID-19 pandemic when we all witnessed the general chaos, disinformation and even medical supplies scandals that China was in the centre of.

What is the future of CEE in the face of Beijing’s and Moscow’s expansionist tendencies? What tools are used by the Russians and the Chinese to assert control? What should the CEE countries do to protect themselves?

These any many other issues will be discussed by a panel of exceptional experts that will include:

– Jakub Janda – Director of European Values Center for Security Policy. He specializes in response of democratic states to hostile disinformation and influence operations. He is Associate Fellow at Slovak Security Policy Institute and regular contributor for the Atlantic Council. He serves as Regional Liaison for Inter-Parliamentary Alliance on China since June 2020.

– Dr. Beata Górka-Winter – analyst with over twenty years of experience and coordinator of the International Security program in one of the leading Polish think-tanks. Author of numerous publications on the policy of NATO, the European Union, anti-missile defense systems and security sector reforms. Member of the expert group “Security Sector Reform Center of Excellence in Southern Caucasus” established by the International Visegrad Fund.

– Paweł Paszak – University of Warsaw graduate in International Relations (East Asia Studies) and a former scholarship student at University of Kent (United Kingdom) and Hainan University (PRC). PhD Candidate at University of Warsaw/War Studies University and a researcher in projects for Poland’s Ministry of National Defence. Expert at the Institute of New Europe (INE) and the author of analyses and articles concerning US-China trade war, China’s economic transformation, and technological rivalry.

– Prof. Piotr Bajda – assistant professor at the Department of International Relations and European Studies at the Cardinal Stefan Wyszyński University. Former researcher at the Institute of Political Studies of the Polish Academy of Sciences, Center for Eastern Studies, deputy director of the Polish Institute in Bratislava. Author of many publications on Central and Eastern Europe.

– Paweł Pawłowski – Chairman of the Warsaw Institute Foundation Council and Warsaw Institute expert on international cooperation and US policy. He graduated law at the University of Warsaw, where he is currently a PhD student at the Institute of Sciences of the State and the Law. A graduate of a scientific internship at The Institute of World Politics and Babson Entrepreneurship Program at Babson College.

The event will be hosted by Julia Grzybowska – President of the Board of Warsaw Institute. Live stream of the debate will be available on our Facebook and Twitter.