Together but separate: Romania celebrates the 100th anniversary of the Great Union

On December 1, Romania held celebrations to mark the 100th anniversary of the Great Union. The official slogan of the event was “sărbătorim împreună”, which means “we celebrate together”. At the end of the day, things did not really work out as planned. Government officials associated with the PSD-ALDE coalition participated in the celebrations held in Bucharest. Romanian President Klaus Iohannis, who is connected with the National Liberal Party (PNL), also attended the event. However, shortly after watching a military parade in the capital, the President went to Alba Iulia, a city located in the Transylvania region. 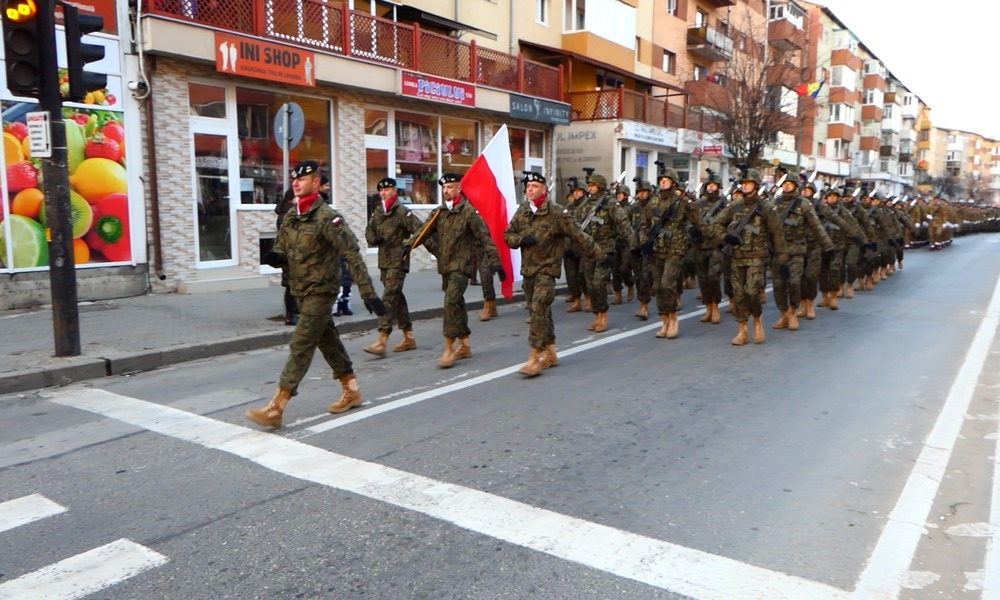 It can be said that the celebrations in these two cities were of the same rank. It is customary that major celebrations are held in Bucharest, Romania’s capital city. However, it is important to note that it was in Alba Iulia where the unification of Transylvania with the Kingdom of Romania was proclaimed one hundred years ago. The events of 1918 have once again given rise to the concept of the so-called “Greater Romania”. The Great Union Day has been celebrated for almost 30 years as the most important Romanian public holiday.

In both cities, military parades were the climax of the event. During the parades, the most modern military equipment was presented, including the Piranha V, which is a type of an armoured fighting vehicle developed by the Swiss company MOWAG. Helicopters and fighter planes, such as the F-16, which is the pride of the Romanian Air Force, flew over the heads of the spectators (however the flight took place only in Alba Iulia, because airport runways in Bucharest were covered with a layer of ice). More than 200 vehicles and 50 aircraft and helicopters took part in the parade in Bucharest itself. What is more, NATO troops marched under the Triumphal Arch in the capital. There were soldiers from Bulgaria, the Czech Republic, Croatia, Estonia, France, Greece, Germany, Lithuania, Latvia, Poland, Portugal, Slovakia, the USA, the UK and Italy. Apart from that, soldiers from the countries that are not NATO members, such as Albania, the Republic of Moldova, Turkey and Ukraine, were also present. The fact that the representatives of the Polish military contingent, which is currently stationing in Romania, were the only foreign armed forces present not only in Bucharest, but also in Alba Iulia might be viewed as the reaffirmation of the close relations between Poland and Romania.

The military parade in Bucharest started exactly at 10 o’clock in the morning. Politicians representing various political backgrounds attended the event. It is worth noting that such joint celebrations have not always been possible. Perhaps the most prominent example is the 2006/2007 New Year’s Eve, when Romania joined the European Union. At the time, the political climate was completely different. There were two rival political camps which argued over the fact that different types of celebrations related to Romania’s accession to the EU were held simultaneously.

Nonetheless, the split in Romania’s society can be easily seen even today. In Bucharest, the crowd booed marching troops of the gendarmerie. It was the result of brutal clashes that occurred in August this year during one of anti-government protests. Unnecessary emotions were also present in the city of Focșani, where Prime Minister Viorica Dăncilă arrived in the afternoon and was later booed by a group of residents. The celebrations in Alba Iulia were peaceful, though President Klaus Iohannis was not accompanied by other high-ranking officials from the ruling party. Corina Crețu, the current European Commissioner for Regional Policy who has recently criticised the Romanian Government for the poor use of EU funds, was among the spectators of the celebrations held in Alba Iulia.