Is There a Third Way in American Politics?

While looking at the American political landscape we often notice the constant rivalry between two parties. The Democratic Party and the Republican Party have dominated the political battlefield, but they are not the only ones on it. In the American duopoly of power, one can notice the small impact that the Libertarian Party exerts. 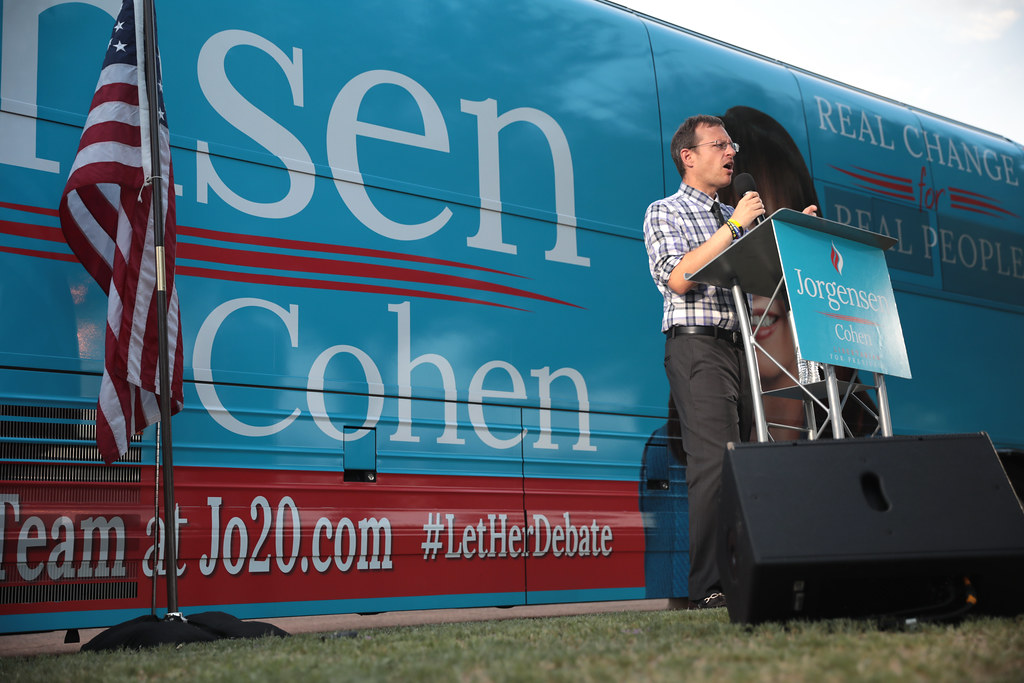 Despite the already mentioned duopoly of power, there are at least a few other political groups in the United States. They represent different, often extreme views present in the land of the free. The largest political party that has not reached the core of American politics is the Libertarian Party. It was founded in 1971 and currently has nearly 700,000 registered voters.[1]

The Libertarian Party promotes classical liberalism, which stands in contrast to the modern liberalism and progressivism of the Democratic Party as well as the conservatism of the Republican Party. Overall, in terms of policies, the Libertarians combine, among others, the liberal worldview of the Democrats and the economic liberalism represented by the Republicans. Despite their commonalities with major American political parties, the Libertarians lag far behind in terms of the number of registered voters when compared with both the Democrats and the Republicans. What seems interesting, however, is the initiative itself, which is likely to play an increasingly important role in American politics over time.

Despite having less than a million registered voters, paradoxically, the Libertarian Party has the potential to influence the outcome of the most important American elections. The analysis of the results of the 2020 presidential election shows that the number of votes of third-party voters dropped in comparison to the 2016 presidential election. This is due to the fact that people who voted for a third-party candidate in 2016, chose to vote for either Joe Biden or Donald Trump in 2020. It turned out that the outcome of the close race between Biden and Trump might have been affected by the actions of Jo Jorgensen, 2020 Libertarian Party presidential candidate.

Jorgensen allowed Biden to win key states, such as Wisconsin and Arizona. In the former, the difference of votes between the winning and losing candidate was equal to 20,682, while in the latter it was even smaller – 10,457 votes. Considering the totals of votes cast in these states, such differences were marginal. The influence of the 2020 Libertarian Party presidential candidate in these locations can be easily noticed. In Wisconsin, Jorgensen secured 38,393 votes, while in Arizona she obtained 50,636 of them – almost five times the difference between Biden and Trump. The latter won both of these states in 2016, but lost them to Biden in 2020. Accordingly, two conclusions could be reached – either some Trump’s libertarian supporters voted for the Libertarian Party candidate, or the third-party voters assumed that Joe Biden would be more likely to implement their demands. The latter seems more plausible.

In October 2020, a Pew Research Center poll asked people who voted for a third-party candidate in 2016 about their voting intentions in 2020. As many as 49% of them said they were leaning toward or supporting Biden, while 26% said they were supporting Trump. A quarter said they were planning to vote for a third-party candidate again in 2020.[2] A New York Times exit poll of 15,590 voters found that of the 5% of respondents who voted for a third-party candidate in 2016, 60% supported Biden and 25% voted for Trump in 2020, while the remaining 15% of votes were cast for other candidates.[3] The results of these polls show that some Libertarian Party advocates chose to support the Democratic Party candidate in the last presidential election. Adding up the votes of third-party voters cast for Biden and those that Trump lost as a result of Jorgensen’s run, one can notice the Libertarian Party’s influence on the outcome of the election in at least a few states. Meanwhile, Jo Jorgensen, a professor at Clemson University, won 1,865,724 votes, or 1.2% of the voter turnout. This is a far superior result in comparison to other candidates representing parties that are not associated with the duopoly of power in the United States. It demonstrates the importance of the votes collected by Jo Jorgensen and the votes that the remaining Libertarians cast for Joe Biden.

The Libertarian Party can boast of 10 politicians who have been elected to state legislatures since its founding. Some of them became its members after being elected as Democratic or Republican politicians. The most recent such example is Marshall Burt, who serves in the Wyoming House of Representatives since 2020. Yet, the case of Representative Justin Amash (MI), who left the Republican Party to join the Libertarian Party, seems to be an exception. As a result of it, the Libertarian Party had its first representative at the federal level. In general, the Libertarian Party has representatives mainly in state legislatures, as well as among local executive heads and other lower-level bodies. Their number has been growing steadily, reaching 182 in 2019. Despite the fact that the size of this political group is incomparable to the two largest parties in the country, the Libertarians in the United States are trying to build their structures from the ground up, and their role in federal elections may be underestimated by numerous political analysts.