The state of transatlantic relations – prospects for 2021 | Summary

The risk of the financial crisis, energy security and Nord Stream 2, Polish-Canadian trade exchange, Poland’s image abroad and economic development after COVID-19 were among the topics discussed during the conversation with the Polish Ambassador to Canada, Dr. Andrzej Kurnicki. The meeting, chaired by the President of the Warsaw Institute, Tomasz Kijewski, on February 16, was organized in cooperation with the editors of The Warsaw Institute Review quarterly and was the first of the new Diplomacy Talks Series. 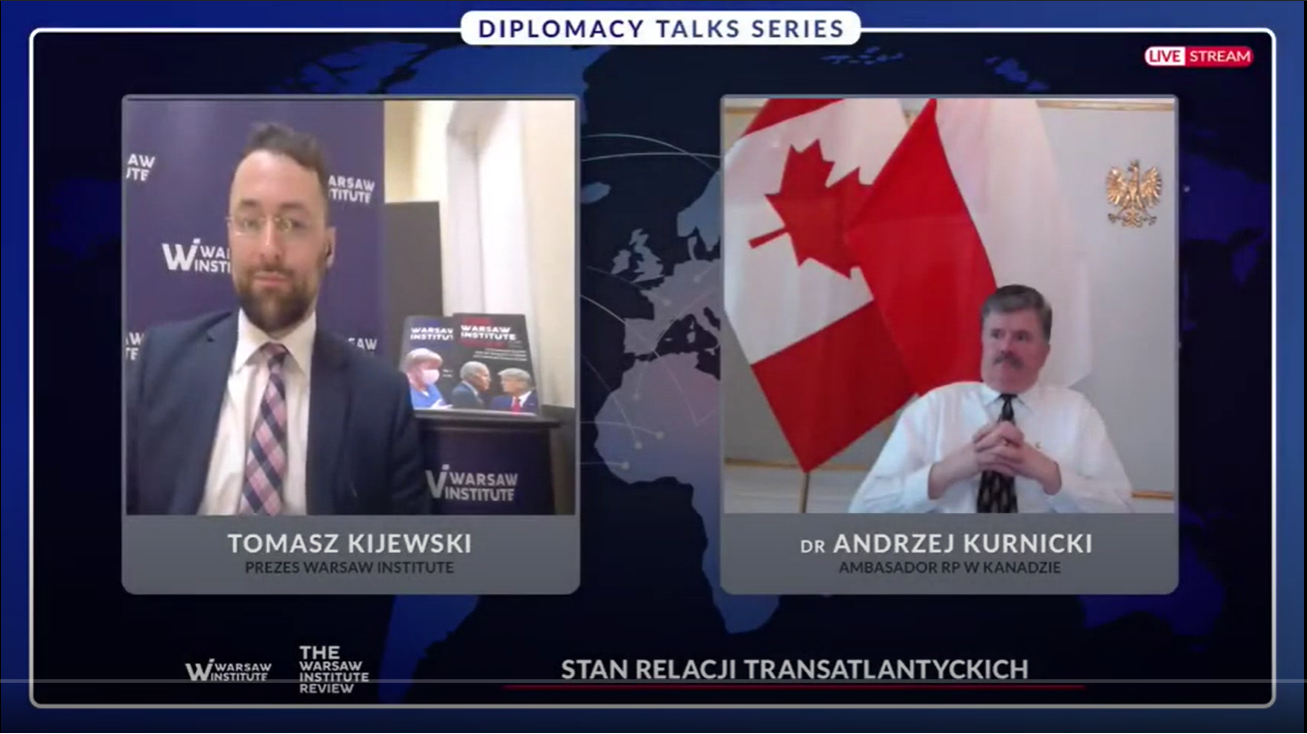 The Polish ambassador to Canada introduced the viewers to 5 socio-economic trends that will set the tone in transatlantic relations. The first is the aging society and deepening social disparities. Dr. Kurnicki cited statistics according to which Western Europe needs about 50-70 million young workers to be able to sustain economic growth and the functioning pensions systems. The second observation is the shift of the global balance of power to the east – to China and India. Further trends are the advancing technological revolution – especially in the field of digitization, as well as the energy transformation towards alternative sources. The last of the main factors that will shape transatlantic relations is the growing risk of a financial crisis resulting from growing indebtedness, which could lead to a crisis of economic systems around the world.

Moreover, the Ambassador praised Poland’s activity in regional geopolitical organizations, especially in the Visegrad Group and the Three Seas Initiative. In his opinion, it is a manifestation of learning from historical mistakes and looking for common denominators that can serve the overall development of the economic, technology, and security systems in the CEE. Dr. Kurnicki stated that these initiatives are becoming a showcase and a mechanism driving the position of the European Union in international politics, especially in the G3 group, which brings together the United States, China and the European Union.
The issue of uncertainty in the international arena in the context of the pandemic and political changes was not omitted. The Ambassador also talked about the perspective of the Polish securities market as a stimulus for post-pandemic economic development in Central and Eastern Europe. The issue of sanctions against Russia was also discussed from the point of view of their effectiveness and the prospects of their impact on Moscow’s relations with the West. Doctor Kurnicki also answered the question about the growing volume of China’s investments in the Central and Eastern Europe region and assessed their possible impact on the development of transatlantic relations. The ambassador also shared his direct experience of the interest of Canadian investors and politicians in the Three Seas Initiative. The issue of Polish-Canadian trade exchange and the possibility of further strengthening the positive image of Poland in Canada and North America were also discussed.

We encourage you to watch the full recording of the event!