On April 3, 2021, Chinese Minister of Foreign Affairs Wang Yi held talks with the Minister of Foreign Affairs of the Republic of Korea (ROK) Chung Eui-yong. The meeting took place in the city of Xiamen, located in Fujian Province, China. Good relations between the countries were upheld and matters requiring mutual cooperation, such as denuclearization of the Korean Peninsula, economic collaboration and holding diplomatic dialogue, were discussed. 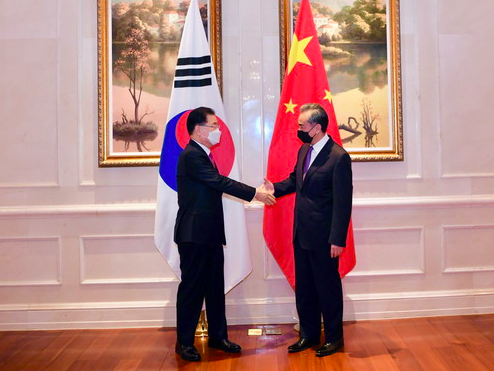 Initially, it was expected that the meeting would last about an hour, but reportedly it took nearly two (about an hour and 40 minutes). The representatives congratulated each other on their cooperation during the COVID-19 pandemic. Wang Yi said that China is willing to maintain close communication with the ROK at all levels, strengthen the strategic dialogue between Foreign Ministries, launch a committee for future development of China-South Korea relations as soon as possible and work with the ROK to prepare for the 30th anniversary of the establishment of diplomatic ties between the two countries.

Moreover, the matter of North Korea was addressed. “South Korea and China share a common goal toward complete denuclearization of the Korean Peninsula and toward permanent peacemaking policies,” said Chung Eui-yong. On the other hand, Wang Yi stated that “all parties should make active efforts to maintain peace and stability on the peninsula”.

The Chinese side hopes to end the second phase of negotiations on the China-South Korea Free Trade Agreement (FTA) soon as well as enhance cooperation in domains such as 5G, big data, green economy, artificial intelligence, integrated circuits, energy and healthcare sector.

Wang Yi reaffirmed the willingness of the Chinese Communist Party Chairman Xi Jinping to visit the ROK after the pandemic stabilizes. It was agreed that the strategic dialogue between the deputy Foreign Ministers concerning foreign and security policy (2+2) would be held in the first half of this year. The two sides agreed to jointly organize a China-ROK Cultural Exchange Year (2021-2022).

Interestingly, the Chinese side made a phone call to the Head of the Japanese Ministry of Foreign Affairs shortly after the meeting with the representative of South Korea ended. Asked about possible connections to that event, Chinese Foreign Ministry spokesperson Zhao Lijian replied “I think it’s just normal diplomatic communication” and “it is normal for Chinese and Japanese foreign ministers to maintain communication over bilateral relations and international and regional issues”.

The visit of Chung Eui-yong takes place when Seoul seeks to fix ties with its largest trading partner. The dispute over the US THAAD anti-missile system deployed in South Korea in 2016 has hit the tourism, cosmetics and entertainment industries. China and the ROK are maintaining developed trade relations. In 2020, bilateral trade increased by 0.3% year-on-year to $285.3 billion, despite the pandemic. China accounted for 25.8% of all South Korean exports in 2020. A year ago, both countries joined the Regional Comprehensive Economic Partnership (RCEP), which increased the trade between the two even more. All indications are that the ROK would seek to maintain a balance between China and America, not taking a side in this conflict. Beijing is a key economic partner while Washington is a vital military ally.

According to a survey by the Chicago Council on Global Affairs, only half (53%) of South Koreans believe that China’s military power is a critical threat to the country and 51% think the same about the PRC’s economic power. Unfavorable opinions of the Korean public towards China are similar to that of Japan and North Korea. The above data illustrate the complexity of establishing alliances and cooperation in Asia, which could be problematic.