The “silent” pearl of Southern Poland

Ćwiklice, a village located within Pszczyna County in Upper Silesia, Poland, is home to a wooden, Gothic church of St. Martin of Tours. The church was built between 1464 and 1466, and its provenance was confirmed by dendrochronological analyses and the study of post-visitation decrees. It was also later rebuilt. The church has a log frame structure; and its main parts are Baroque altars, a 17th century polychrome, and a particularly valuable Gothic triptych located in the side chapel. The building is part of the Wooden Architecture Trail in Silesia, Poland. 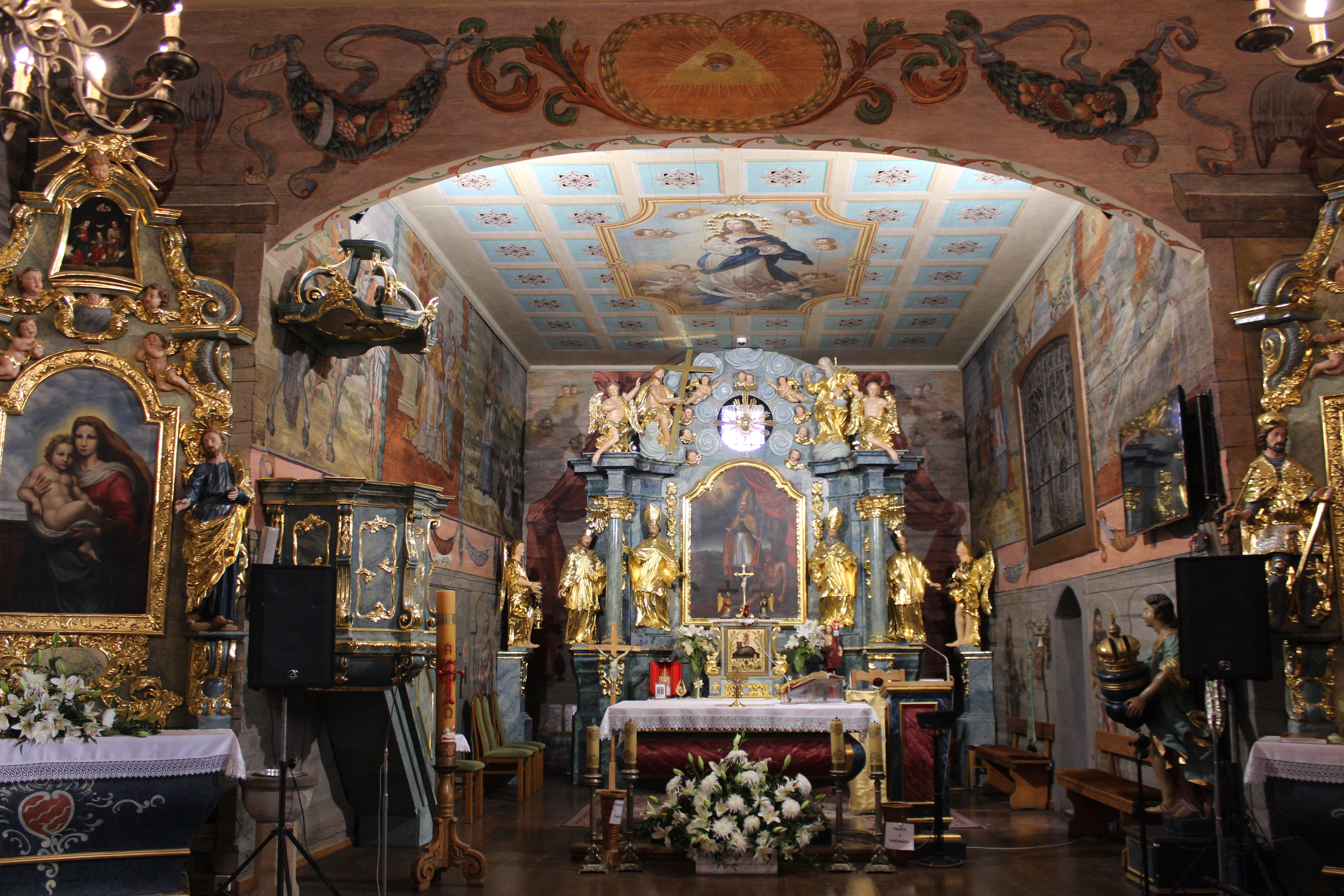 Silesia is split into two main subregions. The first one is Lower Silesia, with the capital city of Wroclaw. There, after World War II, Poles from the then Eastern Borderlands were imprisoned. The second one is Upper Silesia, which, 100 years ago, was the center of uprisings fought by the Silesian people.

Upper Silesia appears to many Polish residents as a land of heavy industry – steel mills, power plants, and mines – entities polluting the atmosphere as well as exposing cities and villages to the harmful effects of mining. As of today, all this is true, but incomplete. Much has changed in this respect already in the 1930s, at the beginning of the rebirth of a free Poland. At that time, a modern metropolis, comprising multiple organically interconnected towns, was created in the center of Upper Silesia.

Today’s Silesia is also a green area – the examples of this are Cieszyn Silesia, the Opole region, the Lubliniec land, and the Silesian Beskids with the green Pszczyna region. The former Duchy of Pszczyna, which reached as far as Katowice (back then just an ordinary village), was part of the Archdiocese of Cracow until 1822. Tourists who come to Silesia visit the Pszczyna Castle, the European bison farm, and, recently, the beautiful Kapias’ Gardens in Goczałkowice.

Furthermore, the Pszczyna Region offers a chance to explore the institutions of the Wooden Architecture Trail, for example, the Open Air Village Museum and wooden churches. Among the latter, the 16th century Church of St. James in Wisła Mała, the Church of St. Catherine’s in Pielgrzymowice, dating back to the end of the 17th century, as well as the church of St. Nicholas in Pszczyna-Łąka, built in 1690, are definitely worth visiting. When going from Pszczyna to the Auschwitz-Birkenau Museum in Oświęcim, tourists should visit the largest Silesian church of St. Clement the Pope in Miedźna. This building, erected in the 17th century, served as a parish church for all the surrounding villages, including Grzawa and Góra – in both of which there are also small wooden churches. In Góra, the visitors can pray to St. Matthew and St. Barbara, and in Grzawa, they can admire the interior of a small parish church of the Martyrdom of St. John the Baptist.

There is yet another monument in the region, which is undoubtedly worth visiting. Dating from 1466 and named the Silent Pearl of the South of Poland, the Gothic church of St. Martin in Ćwiklice is the oldest wooden church in this part of the country.

The church in Ćwiklice is a genuine symbol of medieval Christianity in Central Europe. The only movable historical object from the Gothic times is the altar – a triptych from 1475 located in the side chapel. The central part of the triptych depicts the Virgin Mary with the Infant Jesus conversing with St. Martin of Tours and St. Stanislaus of Cracow (La Conversione). In the left wing of the triptych, St. Apostles Peter and Paul, St. Barbara, and St. Catherine of Siena listen to this exchange, while in the right wing of the triptych, it is St. John the Baptist, St. James, St. Dorothy and St. Margaret who listen.

At the beginning of the 18th century, the interior of this Gothic church had been transformed to Baroque by the owners of Ćwiklice and Rudołtowice – Andrzej Zborowski and his father-in-law, Judge Marcin Kozłowski, both of whom were buried in the crypt. As a result of another reconstruction at the turn of the 19th and 20th century, the back wall was removed from the church, and it was enlarged by the space under the tower.

The oriented building has a log frame structure. The nave was designed on a quadrilateral plan, with the more recent chapel built on its southern side. The porch and a sacristy were built near the presbytery. The double-pitched roofs over the nave and the presbytery are covered with roof shingles. Incorporated into the building’s main body in its lower part, the tower with a pillar structure, finished with a bulbous finial, adjoins the church from the west.

At the entrance, there are plaques commemorating parishioners killed in World War I and Silesian uprisings.

In 2020, it will be 10 years since the beginning of a thorough renovation of the church under my supervision. The restoration included first of all laying reinforced concrete foundations to a depth of two meters, replacing ground sills, partially replacing the tower pillars, reinforcing walls from the exterior with double studs, repairing the roof framework, and the tower, replacing the boarding and roof shingles, as well as drying. What is more, it involved the renovation of crypts, replacement of the floor, and no longer usable benches and choir. This stage took five years. The next five years were spent on renovating the interior. It was carried out by a team of conservators – graduates of the Academy of Fine Arts in Cracow led by Bożena Halska.

Polychrome panels that decorated the ceiling until 1980 were found on the floors of the tower during the renovation. After their conservation and filling in the missing elements, the paintings returned to their original place. At the entrance, under the tower, there is the “Veil of St. Veronica” with the Savior’s reflected face and the “Arma Christi,” the instruments of torture. The recollection of the Passion of Jesus in this part of the church is completed by the restored Way of the Cross and the Pieta sculpture from the 18th century.

On the presbytery ceiling, we can admire the fresco “Assumption of the Blessed Virgin Mary,” and, above the main nave, “Crowning of the Mother of God by the Holy Trinity.” It took a long time for the conservators to renovate the Baroque altars, the main and the side ones. The main altar features a beautiful painting of St. Martin of Tours and figures of saint bishops Adalbert and Stanislaus, Charles Borromeo, and martyr St. John of Nepomuk, also a priest.

The altar on the left side of the main nave depicts the Sistine Madonna, St. Joachim and St. Joseph. In the center of the altar on the right side of the church, there is a painting of the Crucifixion of Jesus, with St. Wenceslas and Christopher looking at the Savior. The conservators put a lot of effort to restore the figures of the apostles, the five scenes of the Passion of Jesus (the Garden of Gethsemane, the scourging, the crowning with thorns, the taking up of the cross, and the crucifixion), and the five scenes of the life of St. Martin (the meeting with the beggar, the appearance of Jesus in a given robe, the resurrection of the dead, the almsgiving, and death of St. Martin).

The renovation and return of the Baroque pulpit were a great success. Beforehand, it had been perishing in the “historic” barn. In addition, the Baroque baptismal font, where many generations of the inhabitants of this beautiful land began their lives in faith, returned to the temple. In 2016, St. Martin’s Church celebrated its 550th anniversary, presided over by Rev. Wiktor Skworc, Archbishop of Katowice. In a few years’ time, another jubilee is to be celebrated – the 700th anniversary of the parish (its first mention is from 1326).

The chances are that the monuments mentioned in the article will one day obtain the title of “monument of history” and be enrolled on the UNESCO list, while I, as the parish priest of this extraordinary community, trust that the church will be given the title of “sanctuary,” so that even more pilgrims will visit this place and learn to “love their neighbor” from St. Martin.

Upper Silesia, the Pszczyna Land, and especially the “pearl” of Ćwiklice are areas and monuments worth visiting. They tell stories about the hardships of Polish history, the roots of generations of Poles living in the borderland, and the identity of Polish culture. The Polishness, which manifests itself in hospitality, care for the other person, and history, is present in today’s Silesians, all of which one can experience it in person when visiting the South of Poland.