Fears are now being confirmed that Moldova will remain under greater influence from Moscow after latest government reshuffles. Although socialists have taken control over fewer ministries in Moldova’s new coalition government, they supervise most of the critical power structures, with President Igor Dodon having gotten actual authority over the Information and Security Service (SIS). The effects came quickly: when visiting Moldova, Russian Defense Minister Sergei Shoigu urged both countries to renew their military partnership. And if this eventually takes place, with socialists being granted full authority in Chisinau, Moldova will find itself in Moscow’s tight grip, paving its way for becoming part of its sphere of influence, a step that is likely to dramatically deteriorate Ukraine’s strategic position. 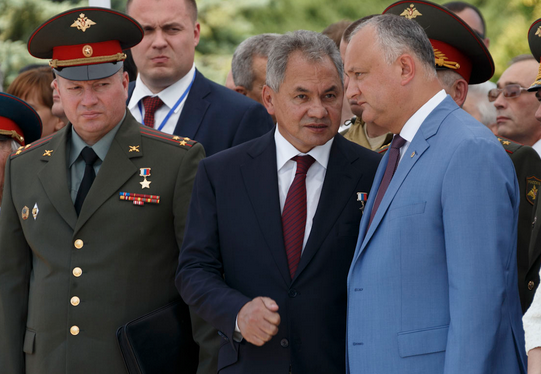 On August 24, Sergei Shoigu held a meeting with Vadim Krasnoselsky who serves as the leader of the unrecognized breakaway region of Transnistria. Russia’s defense minister met both Russian soldiers and a group of 1,500 separatist troops involved in so-called peacekeeping missions, the latter of whom have been deployed to Transnistria since the early 1990s. While visiting Bender, Shoigu laid flowers to the monument to Prince Alexander Nevsky, symbolizing the glory of the Russian army. And this is why Dodon’s presence was seen as particularly striking. Moldovan president accompanied Shoigu during his visit to the secessionist region of Transnistria that adamantly rejects Chisinau’s political authority. Suffice it to say that it is little fortunate to see the head of a country kowtowing to a minister of a foreign cabinet. But this is nothing new for Dodon who has long been recognized as the Kremlin’s puppet. And following recent political reshuffles in Chisinau, a rapprochement between Russia and Moldova is not at all a surprising move.

The Democratic Party of Moldova (PDM), run by the tycoon Vladimir Plahotniuc, was ousted from power while his former silent ally, Igor Dodon, backed by his loyal socialists, obeyed rules from the Kremlin and unexpectedly formed a tactical coalition with the pro-Western ACUM bloc. Apart from the defense ministry, socialists are now in charge of the department responsible for negotiations with Transnistria and the Information and Security Service (SIS), Moldova’s only special service. New legislation on intelligence services has de facto given full authority over the SIS to the pro-Russian political camp in Chisinau. The president will be able to “coordinate the activities of the SIS” while the new law will also empower him to nominate candidates for the service’s deputy head. A candidate for the head of the SIS will be proposed to the parliament whose members will make a final choice. But compared to its coalition partners, the ACUM bloc has fewer votes, 26 out of 61 in the 101-seat parliament.

Shoigu’s trip to Moldova shows that Moscow has already begun to politically consume recent changes in Chisinau that the West had seemed to warmly welcome. Indeed, Moldova’s incumbent prime minister is Maia Sandu while the corrupt tycoon has been removed from power. The problem is that the coalition partner is now an overtly pro-Russian party while the president who hails from it said in an overhead conversation that socialists get monthly financial support from Moscow. Dodon’s inner circle is full of presidential aides that had earlier served in Soviet services and no wonder that they all suggest that Moldova forge an alliance with Moscow. Still in Chisinau, Shoigu made a proposal to form a three-year partnership plan between the countries’ defense ministries. And this should not be a problem since Moldova’s defense ministry is in the hands of the socialists.