Gazprom’s halted gas deliveries to Bulgaria and perhaps soon Moldova made eastern Balkan countries look for some alternatives. One could be an increased flow of liquefied natural gas (LNG) through Greek terminals, currently under construction. Another might consist in expanding gas facilities to deliver more gas from Azerbaijan. In addition, Romania says it will produce much gas once it starts extracting from the Black Sea shelf. The easiest and fastest solution is the second of them, though. Greece-based LNG terminals will be operational in a year and a half. It is only in four years that Romania is poised to become a gas exporter. 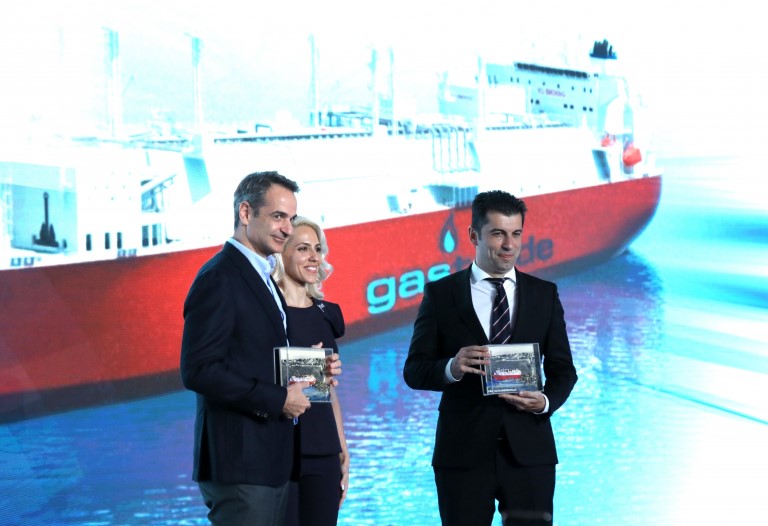 Russian energy giant Gazprom on April 26 halted gas supplies to Bulgaria over a failure to pay for gas in roubles. Bulgaria imported almost 73 percent of its natural gas from Russia. After the Russian gas cutoff, Bulgaria received Greek-sourced gas flows via a number of companies. After Bulgarian Prime Minister Kiril Petkov met U.S. officials in Washington, it was announced that an unnamed US company would supply Bulgaria in June. But gas imports from Greece are still insufficient amid inadequate facilities and the country’s receiving capacity. Bulgaria is hoping to triple gas supplies from Azerbaijan, Petkov added. Sofia has so far imported 300 million cubic meters of gas from the Central Asian country. While seeking to receive more gas supplies, Bulgaria should rush to complete the Gas Interconnector Greece–Bulgaria (IGB) to link the country to the TAP gas pipeline carrying gas from Azerbaijan to Europe via Turkey. Once the IGB is online, it will initially provide Bulgaria with 1 billion cubic meters (bcm) of gas per year. The IGB could have been online by now if it had not been for the policy of the previous government in Bulgaria. The cabinet of Boyko Borisov eagerly opted for energy cooperation with Russia. Bulgaria said on May 12 it would launch a full investigation into the Turkish Stream gas pipeline project that stretches through the country. Bulgaria launched a 474-km gas pipeline in January this year to transport Russian gas from its southern border with Turkey and Serbia, with the latter receiving 13.88 bcm of gas per year. It then supplies Hungary with gas. The Bulgarian prime minister said the Russian-controlled pipeline was built rapidly, albeit at the expense of the interconnector linking the country to Greece. Petkov believes the Balkan Stream is corrupt. It cost Bulgaria some €3 billion. Two new LNG terminals are expected to come online in Alexandroupolis, Greece, in a year and a half to supply Bulgaria, Serbia, North Macedonia, and Romania and Moldova and Ukraine, according to the prime minister of Greece, Kyriakos Mitsotakis. Moldova currently relies 100 percent on gas from Russia’s Gazprom and is seeking to escape this dependency amid the ongoing dispute with the gas giant. The government in Chisinau is eyeing some supplies from neighboring Romania. Romanian leaders say gas extractions from the Black Sea’s field, due to come on stream in 2026, will make Romania a regional energy exporter. In March, Romania’s state-owned energy company Romgaz approved the contract to buy over 50 percent of the Neptune Deep field from US ExxonMobil for $1.06 billion. The main shareholder in Romgaz is the Romanian state, which has a 70 percent stake. Romanian officials estimated that the total amount of gas in the Neptune Deep field exceeds 100 bcm. Romania’s Energy Minister Virgil Popescu said Romania will produce more natural gas than it needs once it starts extracting gas from the Black Sea area––and will then be in a position to export to countries in the region, with Moldova a priority. Gas will flow through the Iasi-Chisinau pipeline that was built last year.