Report from the Eastern Borderlands

As the cold steppe winter is getting closer and closer Europe is facing a new humanitarian challenge and not as the result of the new wave of the covid-19 pandemic, but because of a huge migration crisis. 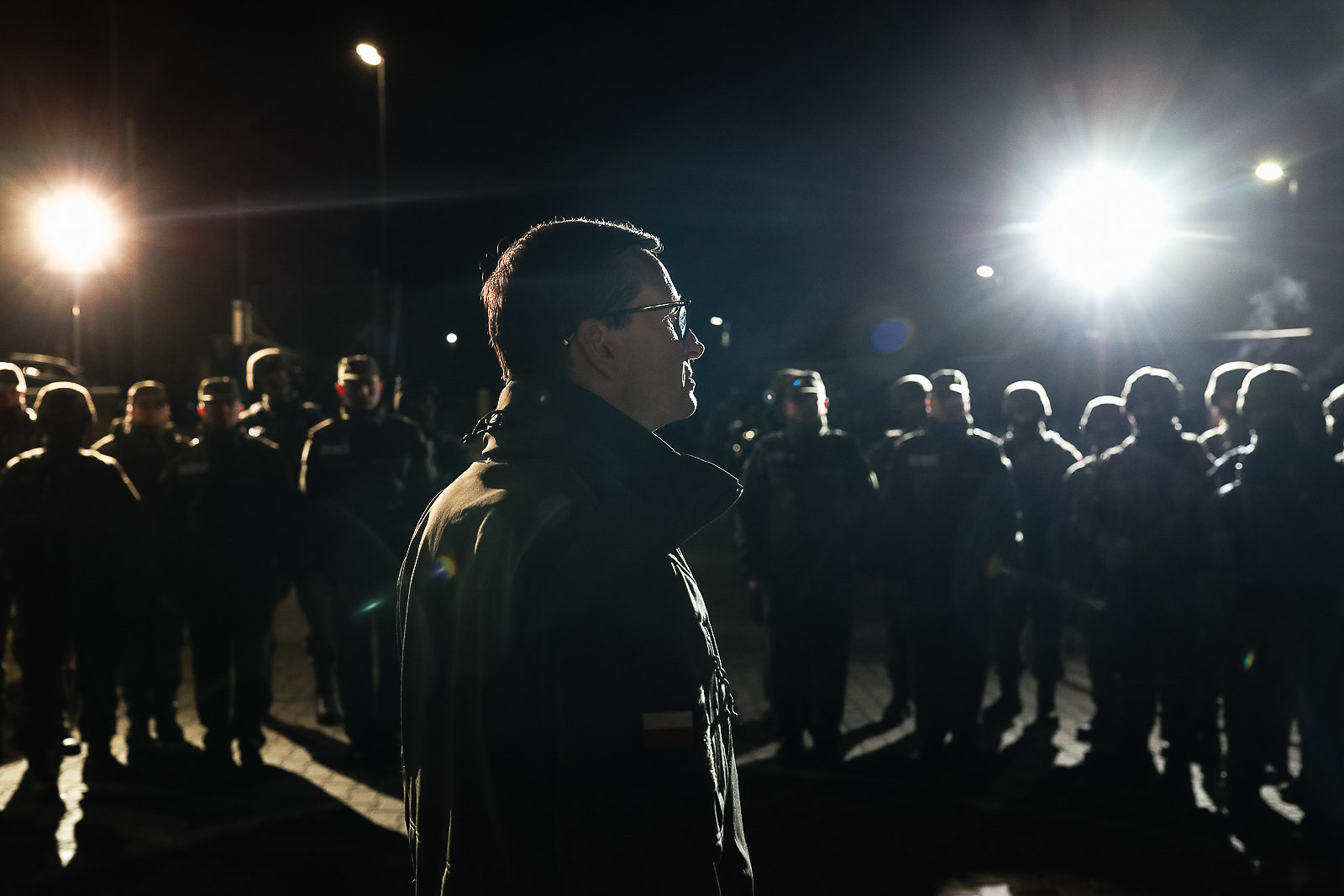 This migration crisis is labelled by the affected countries and the EU as a hybrid war on the eastern borders of the block[1]. The EU is facing a huge normative crisis and is stuck in a stalemate. Whereas accepting every irregular migrant would be seen as an invitation for others on the contrary the humanitarian crisis somehow has to be resolved. Since human beings mostly from the Middle East and North Africa are stuck on the border between Poland and Belarus where the temperature can reach minus 10 °C during the winter season.

During the summer of 2021 huge pressure was detected at the eastern borders of the EU compared to the ordinary Mediterranean and Balkanic migration routes. On the 2nd of July, the Lithuanian president Gitanas Nausėda declared the state of emergency.[2], Frontex immediately pledged to help the Lithuanian authorities since the illegal border crossing peaked six times larger than before.[3] Days later with the approval of Lithuania Frontex conducted a „Rapid Border Intervention” on the eastern border with Belarus.[4], At the end of July around 100 border guards, 30 squad cars and 2 helicopters patrolled on the Lithuanian border under the flag of Frontex.[5] Back then the situation in Latvia[6] or Poland was different, in the former the state of emergency was announced only on the 10th of August[7] and Poland declared it on the 2nd of September[8] but only in specific municipalities shown by the map. 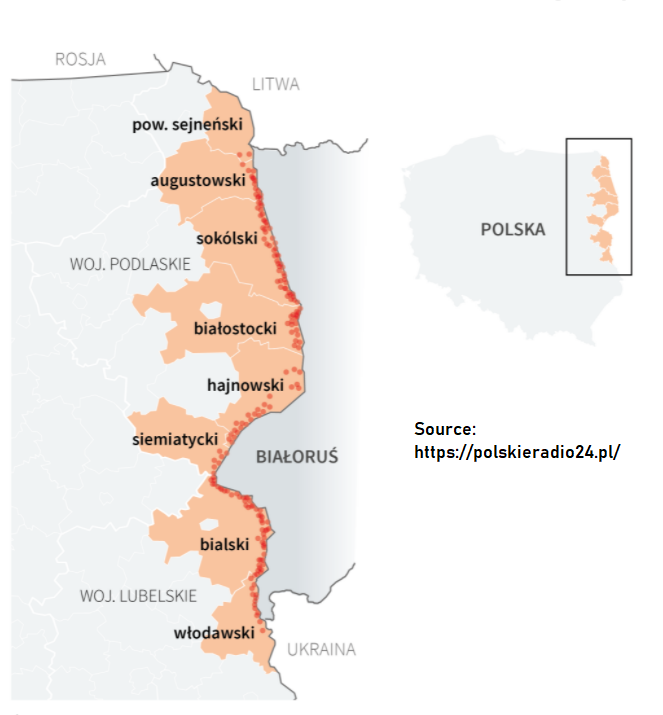 SOURCE: Figure 1 Eastern districts of Poland where State of Emergency was declared / POLSKIERADIO24

Declaring the state of emergency is very important in these circumstances, conceived Mariusz Kamiński polish minister of interior: after Polish President Andrzej Duda’s decision, since the authorities will have much greater flexibility to handle the situation in order to raise efficiency.[9]

On the other hand, the stance of the European Union is more interesting. The viewpoint of the EU can be considered more pragmatic than in 2015. Early September the high Representative of Union for Foreign Affairs and Security Policy Josep Borell stated the EU’s foreign ministers: „ stand in solidarity with Lithuania, Latvia and Poland and we are ready to take all measures to support them if the situation continues deteriorating. ”.[10]

Meanwhile, Lithuania, Poland and lately Latvia have started accusing Belarus of the migration crisis. The Polish Prime Minister Mateusz Morawiecki even stated that the situation was orchestrated by Belarussian authorities in order to destabilize the European Union and therefore should be considered a hybrid warfare.[11] Nevertheless, the EU has put enormous pressure on the Lukashenka led country, additionally, its relations with the neighbouring countries cannot be considered peaceful either. The EU’s new economic sanctions were imposed at the end of June exactly before the beginning of the migration crisis. Not less than one year earlier the first sanctions were imposed on the regime after allegations of the voting fraud of the elections, which put the President in place again for the 6th consecutive time. The new sanctions were imposed because, according to the EU, the eastern European country’s authorities violated fundamental human rights, struck down the civic society, oppressed opposition journalists, and politicians, but most importantly because a Ryanair flight which carried Roman Protasevich was diverted and the opposition figure was later arrested in Minsk.[12] He was originally flying from Greece to Vilnius the capital of Lithuania where most of the Belorussian opposition lives in exile. The Baltic country for instance has not even accepted the political refugees and refused to extradite the Belorussian opposition leader Svetlana Tikhanovskaya but approved the opposition’s anti-governmental protests in the country too.[13] Taking into consideration these hostilities between the countries, we can state there were numerous factors which could have motivated Belarus to carry out the action of which they are accused by the EU and its neighbours.

But the aim of the article is not to answer the question of whether the Belorussian state is bolstering the transportation of middle eastern and north African people to the border or not. The aim is to have a clearer picture of the situation and to show how much greater the crisis is than was previously assumed. 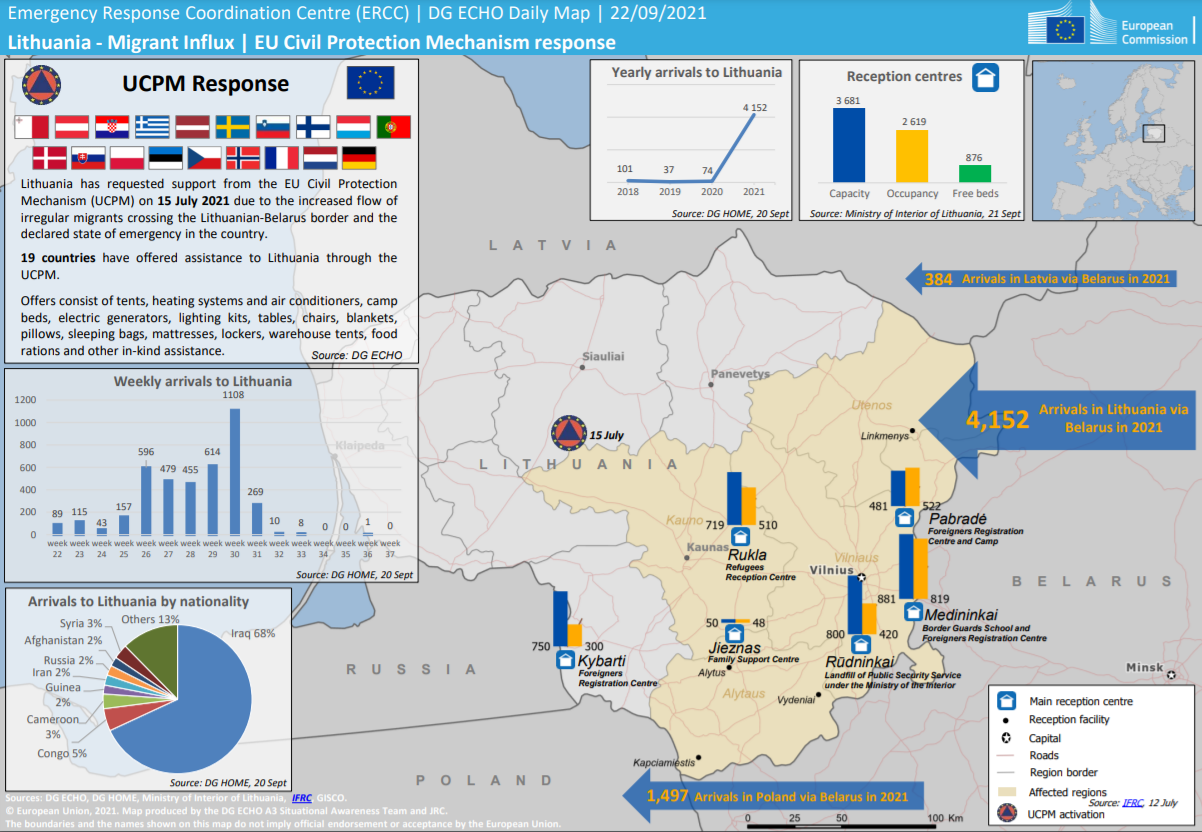 SOURCE: Figure 2 Illegal border crossing in Lithuanina until the 22nd of September / reliefweb.int

The following map was published by the United Nations Office for the Coordination of Humanitarian Affairs and was made by the Department for Humanitarian Aid and Civil Protection (DG ECHO) and the Emergency Response Coordination Centre (ERCC), which shows the influx of irregular migrants towards Lithuania.[14] The most interesting fact is that this year until the 22nd of September the number of illegal border crossings has surged to 56 times as high compared to last year.

Since the 9th of July 2021 when Lithuania started building its temporary border fence,[15] 1546 people have crossed the Lithuanian-Belorussian border illegally in 2021.[16] In Hungary the building of the temporary fence started on the 13th of July in 2015 and until that day 78,190 people have crossed the border illegally and were registered by the Hungarian authorities[17] The population of Lithuania is 2.794.700 meanwhile Hungary’s is 9.749.763 according to World Bank,[18]. This means that until the starting of the building of the fences, the illegal border-crossings (compared to the population of the affected country) were 0.80196821194 % for the Hungarian border and it was 0.05531899667% on the Lithuanian side. Eventually, we can say that the Lithuanian side ordered the building of the fences at a 14 and half times smaller pressure compared to population than as of in Hungary. Poland started building its temporary fence – which was made after the Hungarian model – on the 23rd of August on the Belorussian border.[19] Until that day 780 people have been registered as illegal border crossers in the country.[20][21] Which was the 0.00205529253 % of the total population[22], which means that the Polish side started building the fence with 390 times smaller pressure than in Hungary. So, it is now visible that compared to the pressures of the migration crises the Hungarian fences were the latest to be built. 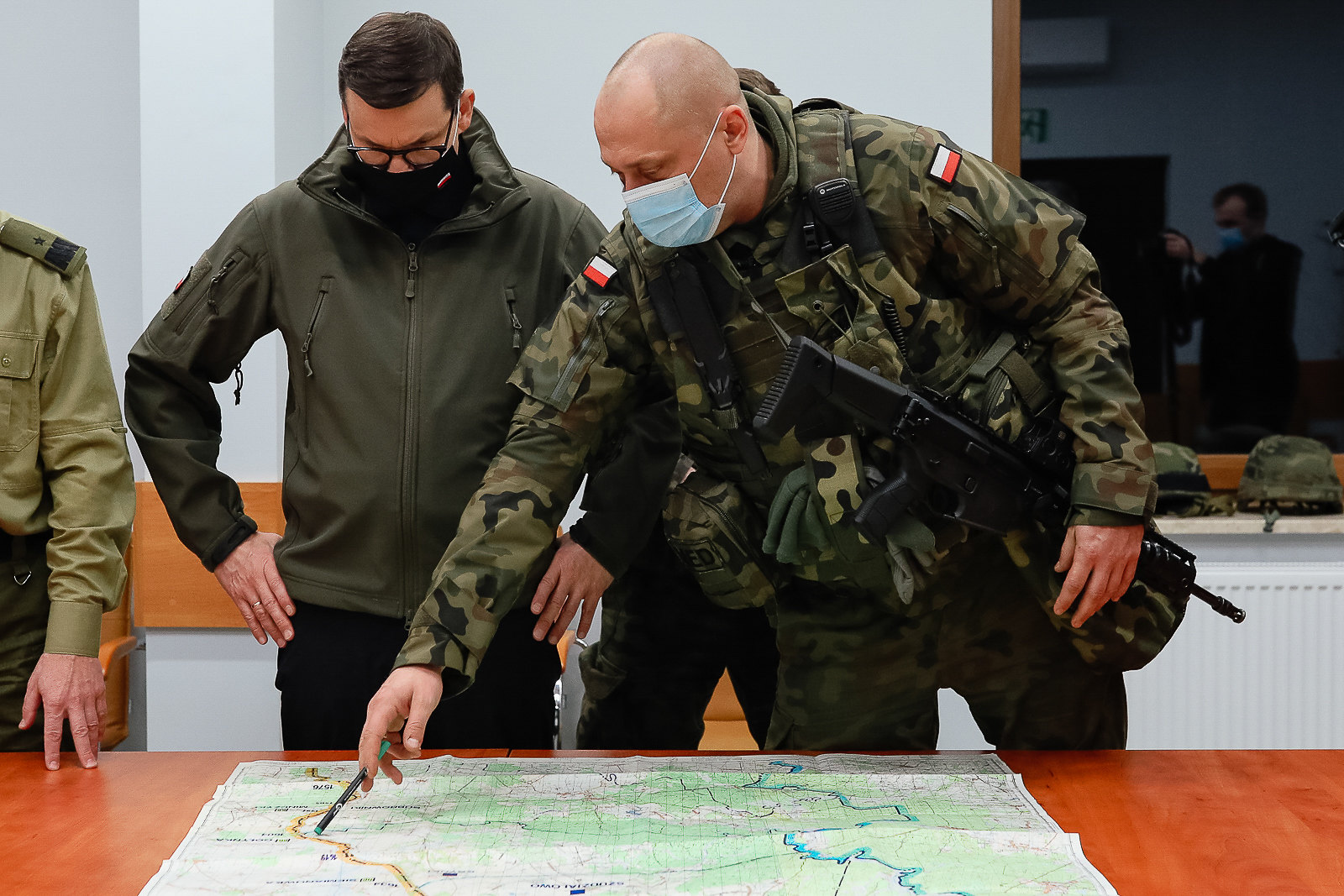 According to some NGOs like Amnesty International at borders the so-called illegal pushback can happen which can push back hundreds of illegal migrants to Belarus.[23]. Therefore, the migrants are not registered by the authorities and are not let into the countries of the EU where they could apply for asylum. Furthermore, if the quality or the capabilities of the border guards are different, a smaller number of migrants can be detected. Therefore, these factors can modify our numbers but for the sake of the example let’s assume that the numbers of the illegal pushbacks and the quality of the border guards were roughly the same. Even if not the differences in these factors must be tremendous if we want to equal the 390 times bigger difference between Poland and Hungary.

Even though we only used the indicator of the number of illegal border crossings a very important outcome has to be made. An ongoing fence building trend has started in the countries of the European Union and the pioneer of this trend was Hungary in 2015. The latest example of this is arguably the Greek one inaugurated in August on the Turkish border, which had the main intention to keep the potential flow of Afghan migrants controlled on the Turkish side.[24] But how can we explain this trend? One of the reasons can be that types of migration flows were different, and this determined the timing of the building of the fence since all the affected countries and the President of the Commission Ursula von Der Leyen blamed Belarus for this orchestrated migration crisis and considered it as hybrid warfare[25] – and this unity from both the EU and the affected countries led to a healthy fence building climate. Or that since the start of the 2015 migrant crisis, the act of fence buildings as an appropriate answer contrary to the bureaucratic and slow reactions of the EU have become widely accepted among European Countries for which the New Migration and Asylum Pact[26][27] which has been on the anvil for over a year now is the perfect example. My goal was not to decide whether these scenarios lead to the fence building trend in the block or not. But I think these were the most probable, based on the arguments presented, but to acquire a full view of these scenarios I recommend conducting more research on the topic.

[14] More about The EU civil protection mechanism which made the map available: https://ec.europa.eu/echo/what/civil-protection/mechanism_en