State fund of Qatar decided to buy almost 19 percent of Rosneft shares after the failed attempt of selling them to a company from China. Even though Russia will portray this as a success and beginning of strategic involvement of Qatar into Russian gas-oil market, the transaction was induced mainly by the necessity of finalisation the financial operation which had started yet in December 2016. 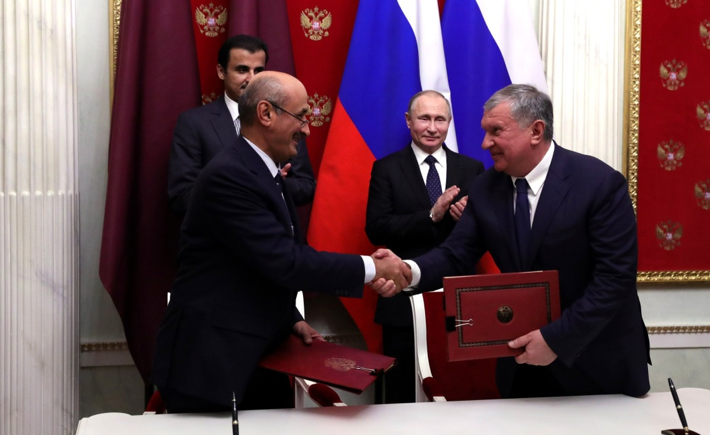 A consortium Glencore and QIA (Qatar Investment Authority) terminated an agreement with a Chinese company CEFC on selling 14.16% of Rosneft shares. A package which was to be bought by the Chinese is eventually passed to the Qatari and the consortium is dissolved.

The consortium – QHG Oil Ventures – was formed in 2016 by a Swiss Glencore trader and a Qatari QIA state investment fund. They possessed half of shares each. At the end of 2016, within the partial privatisation of the Russian Rosneft company, QHG bought 19.5% of its shares for 10.2 bln euro. But the consortium paid only 2.8 bln euro from their own budget (QIA 2.5 bln euro, Glencore 0.3 bln euro) and the remaining 7.4 bln euro were provided as a credit by an Italian bank Intesa Sanpaolo (5.2 bln euro) jointly with Russian banks (2.2 bln euro), Gazprombank, among others. In September 2017, it turned out that QHG agreed on selling 14.16% of Rosneft shares to the Chinese company CEFC China Energy for 9.1 bln dollars. Chief of Rosneft Igor Sechin portrayed it as a big event – direct involvement of the company from the key for Russian hydrocarbons Chinese market into the production of this material. After the transaction, CEFC would have 14.16% of Rosneft shares, QIA 4.7% and Glencore 0.5%. Everything was to be finalized till the end of 2017. Then, the deadline was extended for a couple of months as it turned out that CEFC had problems with gaining money for the purchase of Russian company’s shares. Russian banks were able to provide part of resources, but in Chinese ones the company had already had huge debts, whereas foreign banks were not accessible due to sanctions imposed on Rosneft. What is worse, chief of CEFC Ye Jianming become suspected of committing economic crimes. He was detained in March 2018 and his business empire has begun to collapse. CEFC falls behind with payments for employees and plans huge job reductions.

In such a situation QHG Oil Ventures terminated an agreement with CEFC on selling 14.16% of Rosneft. The Chinese were replaced by the daughter company QIA. It bought 14.16% of Rosneft from QHG, which was dissolved. The Qatari paid 4.7 bln euro, which will cover consortium’s debts in banks. Then, the consortium will be dissolved. Remaining 5.34% from the Rosneft package owned by the consortium is divided between shareholders according to their financial contributions in December 2016: Glencore gets 0.57%, and QIA gets 4.77%. As a result, Qatar, through its investment fund, becomes an owner of 18.93% of shares of the biggest Russian oil company, the third shareholder in terms of share possession (state-owned Rosneftegaz has over 50% and British BP – 19.75%).

Qatari fund buys Rosneft’s shares due to problems with the transaction with the Chinese. Such a possibility was probably already being discussed during the visit of Emir of Qatar Sheikh Tamim bin Hamad Al Thani in Moscow on March 26. He met with Putin and talks behind closed doors lasted 3 hours. Rosneft and Qatari Qatar Foundation state fund signed an agreement on strategic partnership. On March 29, Sechin flew to Doha where he was hosted by Emir. Chief of Rosneft talked also with members of Qatari government and board of Qatar Petroleum company. Sechin opened also a branch of Rosneft in Qatar. It is possible that the Qatari’s decision on strategic entrance into Rosneft is connected with their plans of involvement into LNG projects in Russia. But the question is whether Qatar is really willing to engage into Russian market. It will not be easy to sell Rosneft’s shares. They are expensive and do not provide any rights to administer. The company is sanctioned and seriously indebted. Market value of Rosneft is estimated at only USD 65 bln, despite the fact that it produces more oil that American ExxonMobil, worth USD 324 billion.