Not surprisingly, Putin’s recent presidential address seemed similar to the one delivered a year before. In his annual speech to Russia’s Federal Assembly, President Vladimir Putin paid most attention to the country’s economy and social matters, compiling an exhaustive list packed with concrete promises. This should satisfy the majority of Russian citizens who seem bored with the Kremlin’s strong rhetoric on foreign policy. A more aggressive part of the address should be seen as a message to foreign recipients rather than domestic ones. Like last year, Putin threatened the United States with new weapons, yet the Russian leader apparently toughened his discourse. This stems from recent turmoil over the INF Treaty while showing that all threats so far proved highly ineffective. Facing such a failure, Putin can only strengthen his war rhetoric. 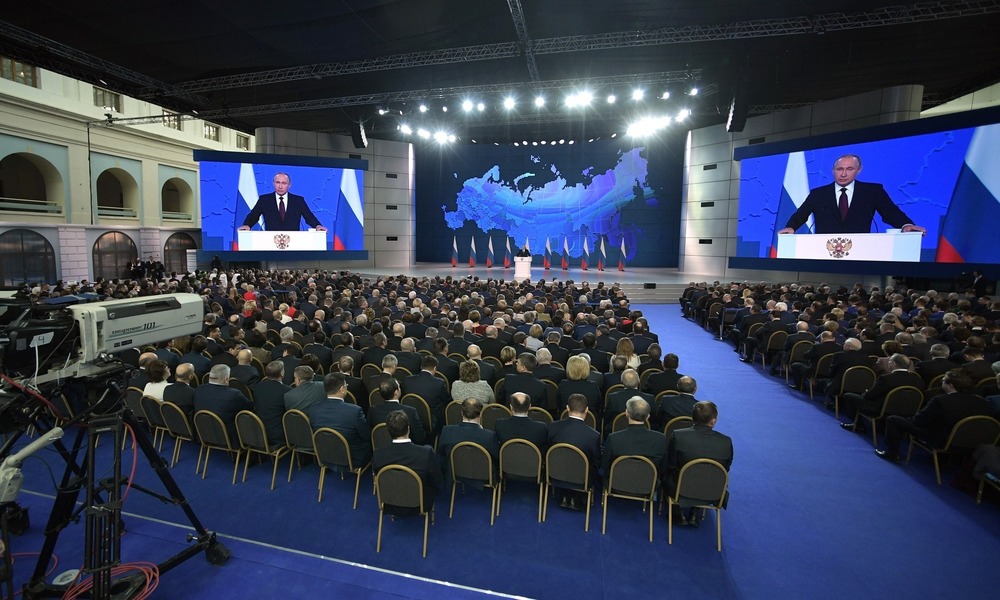 Russian President gave his word to implement a wide range of social activities aimed at raising the standard of living the country or at least at preventing it from any further decline. Naturally, all of them come as a response to the falling approval ratings of both the president and the government triggered by some unpopular decisions, including those to raise pension age and increase the value-added tax rate. Putin’s social commitments involve providing various reliefs, subsidies and deliberate support, all of which have been warmly welcomed by society. Nonetheless, there emerges a question of whether this will ultimately translate into preventing the regime’s popularity from a further drop. This is doubtful for two main reasons: first, in order to fulfill all promises the Russian administration needs to proceed smoothly, which is unlikely to happen due to ubiquitous corruption and incompetence. Secondly, such an undertaking needs considerable financial efforts. Russian Finance Minister Anton Siluanov said all actions announced by Vladimir Putin will require additional funds from the state budget, amounting to even $1.5-2 billion dollars per year. Interestingly enough, the said information intends to demonstrate the credibility of all the promises. Theoretically, this is not a large amount yet its considerable part will be spent on other purposes. These measures are intended to mitigate the outcomes of the crisis instead of eliminating its reasons. They all aim at maintaining Putin’s popularity at a satisfactory level until the end of his presidential term.

Russian President paid less attention to foreign affairs, focusing first and foremost on criticizing the United States. Putin accused Washington of ignoring “Russia’s legitimate interests” while conducting “constant anti-Russia campaigns.” As last year, weapon emerges as Putin’s only argument – Russian President mentioned the same types of weapons he had presented a year before to demonstrate swift progress that has already been made. The problem is that these statements are underpinned by doubts and propaganda claims rather than precise details, as exemplified by what was said about the development of the Avangard strategic hypersonic glide vehicle. In his address, Vladimir Putin announced its serial production, thus repeating what he said a year ago and then during another address in December 2018. Speaking of the Tsirkon hypersonic missile, Vladimir Putin said it would be capable of developing the speed of March 9 (instead of Mach 6, as previously informed) while having a range of 1,000 kilometers, and not 400 as initially announced. In addition, he spoke about the Burevestnik nuclear-powered cruise missile, bragging about its unlimited range. However, the problem is that of thirteen combat tests conducted so far, only two could be referred to as “partially successful”. Also, Putin referred to the INF Treaty, telling the audience nothing more than just a pack of lies. “Russia will be forced to create and deploy weapons that can be used not only in the areas we are directly threatened from, but also in areas that contain decision-making centers for the missile systems threatening us,” he said adding that “Russia does not intend to take the first step in deploying such missiles in Europe.” Nonetheless, it is widely known that Moscow disposes of 9M729 cruise missiles stationed in the European part of the country.