On September 12, the Russian president announced that he would like to make a peace treaty with Japan by the end of this year without any preconditions. The surprising proposal was made during the plenary session at the economic forum in Vladivostok – it was addressed directly to Japanese Prime Minister Shinzo Abe. In addition, large-scale military exercises, Vostok-2018, have begun at the same time. It seems that Japan can not accept this offer, simply because it is unfavourable for it. If Tokyo concludes this peace treaty without any conditions, it will lose four islands forever. Putin’s surprising words are a psychological game that also gives Russia real political benefits, regardless of Tokyo’s response. 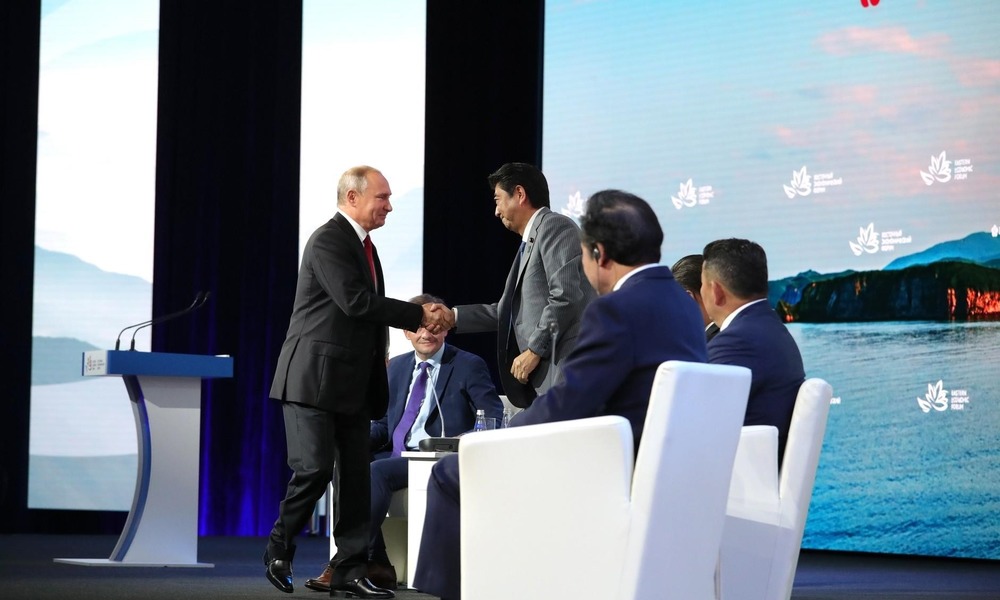 First, on September 10, there was a bilateral meeting of Putin and Abe. There was no breakthrough. Then, on September 12, during the plenary session at the economic forum in Vladivostok, in his speech, the Japanese prime minister once again called for steps towards signing a peace treaty between Moscow and Tokyo. Moments later, Putin made a surprising move. He offered Prime Minister Shinzo Abe that the treaty be concluded by the end of this year without any preconditions. “And later, on the basis of the peace treaty, as friends, we will continue to resolve all disputable issues,” added the Russian president. He completely surprised Abe. It is no wonder that the Japanese prime minister, who was sitting on the same stage with Putin, did not provide any answers. It seems that Putin has already gained from that. If Abe had responded positively, it would also have meant Putin’s success. If the response had been negative, it would also have been a win-win situation for Putin. It was a move, from which only Putin could benefit.

Usually, such proposals are not made spontaneously, without prior consultation. It was an extraordinary manifestation of impertinence on Putin’s part to say that “this idea just came to my mind”. The bilateral meeting took place two days earlier. Japan’s government spokesperson Yoshihide Suga stated on September 12 that the Russian leader did not make such a proposal during the bilateral meeting with the Japanese prime minister. Now, Putin has deliberately put Abe in a difficult situation – he did not have time to consider the proposal. What is more, for outside observers, especially those who do not know the complexity of Russian-Japan relations, Putin’s offer could seem peaceful and honest. Putin was almost completely convinced that Abe would not respond to the proposal; that is why he did it in the first place. In this way, he portrays himself as a peace supporter, implying that it is the Russian side which seems to be the one aiming for de-escalation and peace.

Surprised Abe did not react. It was his spokesman who responded a few hours later. Suga stressed that Japan will not change its position, which involves the resolution of the sovereignty issue over the Kuril Islands, before concluding a peace treaty with Russia. This means that Tokyo rejects the idea of the peace treaty without any preconditions. When speaking about “preconditions”, what Putin actually referred to were de facto the conditions set by Japan, which are above all about the return of four islands. This dispute over the southern part of the Kuril Islands, called by Japan the Northern Territories, blocks the conclusion of a peace treaty between Moscow and Tokyo. It is about the islands of Kunashir, Iturup, Habomai and Shikotan. Although Moscow said that it wants a mutually satisfying resolution, it seems that for the last two years it has taken steps to prove something entirely opposite. In autumn 2016, the Russians deployed a reinforced squadron of Bastion missiles on the Island of Iturup and the squadron of Bal missiles was transferred to the Island of Kunashir. The generals mentioned about placing the entire army group there. At the same time, Moscow criticises the military cooperation between Japan and the USA, in particular the anti-missile shield. At the end of 2017, the government in Tokyo decided to deploy two US Aegis Ashore missile defence systems.