The Kremlin has launched his disinformation machine, this time targeting Poland. The signal came from Vladimir Putin himself, who expressed a series of lies, distortions, and slander over the history of Poland within just a couple of days. The top purpose is to accuse Poland and Poles of anti-Semitism, as well as carry out a verbal attack amidst Warsaw’s alleged complicity in the outbreak of World War II. Russian attacks will grow more violent and absurd the stronger is the evidence of Soviets’ collaboration with Nazi Germany. Tensions will be running high as Russian politicians and media outlets may unleash sharp criticism in the ensuing months, for instance, on the occasion of the anniversary of the liberation of the Nazi extermination camp Auschwitz-Birkenau or the anniversary of the end of World War II. The Kremlin is taking revenge on Poland due to the latter’s policy being an obstacle to Russian energy and military plans. Moreover, this is part of a large-scale disinformation campaign aimed at redrawing the history of World War II to take away the odium of cooperation with Hitler from Moscow and hence, its blame for the outbreak of war. 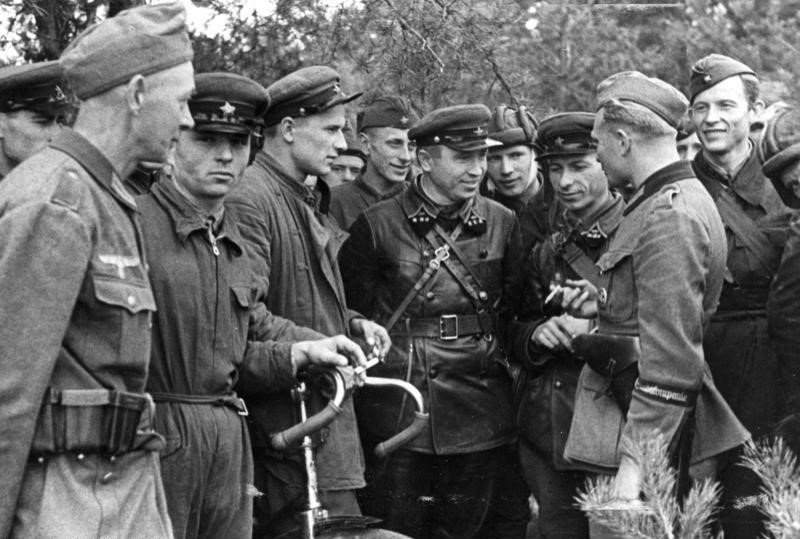 What Putin said cannot be incidental, though. In just a couple of days, Russia lambasted Poland on the grounds of politics of history, with the words coming out of Putin’s mouth. Furthermore, the Russian leader was prepared for these verbal attacks. To make them sound stronger and more reliable, he cited an archival document the Soviet stole from a German archive after they had conquered Berlin. Putin combined the facts with an erroneous interpretation in a truly Soviet-Russian way, making the message sound and look somewhat credible. In addition to striking a blow to Poland, these actions were aimed at imposing a Russian interpretation of historical facts. Putin said the immediate cause of the war was not the August 1939 Molotov-Ribbentrop Pact but the 1938 Munich Pact.

Speaking at his annual news conference on December 19, the Russian leader slammed a resolution adopted by the European Union that states the 1939 pact between the Soviet Union and Nazi Germany “paved the way for the outbreak of World War II.” While sharing his remarks on the law, Putin said it “is the height of cynicism” to compare the Soviet Union and Nazi Germany in this respect. While referring to secret protocols to the pact that redrew the map of Poland, Putin said that “Poland also participated in the partition of Czechoslovakia.” He meant Poland’s annexation of the Zaolzie region, following the Munich Pact. It is worth noting that the area remained under control of Poland while Czechoslovakia seized it forcibly in 1920, taking advantage of Poland’s being busy fighting a fierce defensive battle against Bolshevik Russia. Putin, speaking during a meeting with the leaders of other ex-Soviet nations in St. Petersburg on December 20, yet again strongly criticized the recent resolution of the European Parliament. The Russian leader said that the cause of the war was not the Molotov-Ribbentrop Pact but the Munich Pact. Speaking in front of members of the Eurasian Economic Union, Putin lashed out at Józef Lipski, who served as Poland’s ambassador to Berlin before World War II. Citing a report written by the Polish diplomat about the his conversation with Hitler, the document addressed to the head of Poland’s Foreign Ministry, Putin said Lipski was in complete solidarity with Hitler in his anti-Semitic sentiment. Vladimir Putin echoed his insistence at an enlarged meeting of the Russian Defense Ministry’s board in Moscow on December 24. Later that day, Putin met with the leadership of the State Duma, the lower house of the Russian parliament. Russian State Duma Speaker Vyacheslav Volodin said the Polish authorities must apologize for their country’s “actual collaboration” with Nazi Germany. In response to Putin’s December 20 statement, Poland’s Foreign Ministry rejected his words, including Russia’s considering the 1938 Munich Pact and not the 1939 Molotov-Ribbentrop Pact the immediate reason for World War II and Poland’s using the former deal to pursue its territorial claims against Czechoslovakia thereafter. Total calculations put the total number of victims of Soviet repressions before and after the war at 566,000 Poles, read the statement.