Turkey’s President Recep Tayyip Erdogan arrived in Russia for his third meeting (and second in Moscow) this year with his Russian counterpart Vladimir Putin. During his trip, the Turkish head of state confirmed his intention to purchase Russian S-400 anti-aircraft missile system despite the mounting pressure from both Washington and NATO allied countries. Also, as evidenced by the Putin-Erdogan meeting at the Kremlin, the Syrian-Russian joint offensive against Syria’s rebel-controlled Idlib enclave is still to remain suspended. So far, Erdogan has made a successful attempt to hinder the liquidation of Syria’s last rebel-held bastion. Ankara sees it as an essential bargaining chip in the game whose goal is to neutralize a threat posed by the Syrian Kurds. 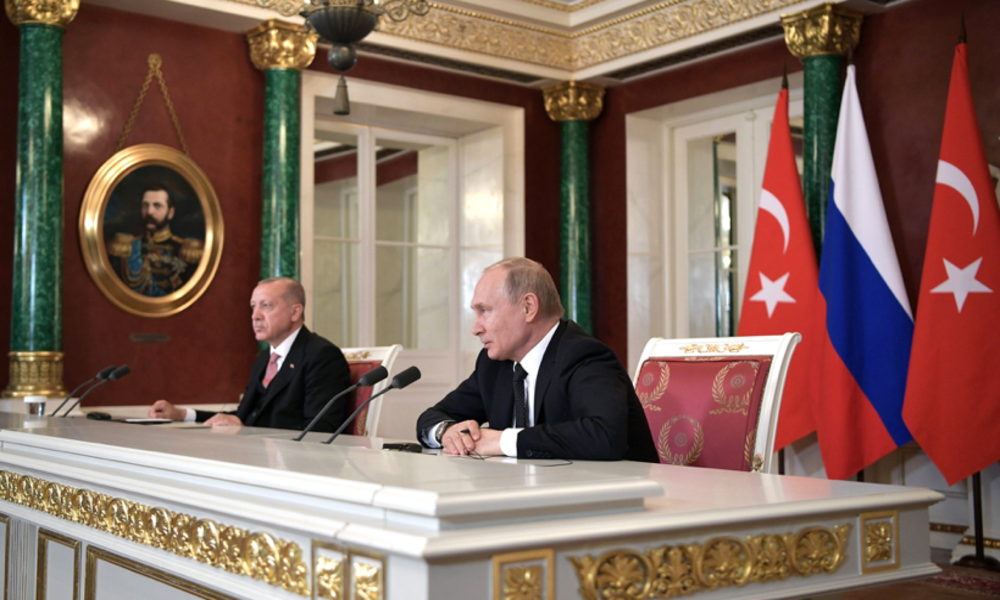 On April 8, Russian President Vladimir Putin hosted his Turkish counterpart at the Kremlin. Both leaders met to hold talks on the situation in Syria, the sale of Russian S-400 air defense missile systems to Turkey and other economic deals. This was Erdogan’s third visit to Russia this year, marking ever-closer cooperation between Moscow and Ankara as well as Erdogan’s tenacity against U.S. pressure.

Greeting Erdogan at the beginning of their talks at the Kremlin in Moscow, Putin said that they will discuss the delivery of S-400 air defense missile systems to Turkey. The Russian leader referred the deal to as the highest priority for Russian-Turkish partnership. As he notified, discussions are ongoing to seal other arms deals. Moscow hopes to carry out this transaction for geopolitical reasons as it would be a blow to NATO unity. In terms of its volume and importance, Turkey’s purchase of Russian-made S-400 missile systems is the first deal of that kind to be ever concluded by a member of the Alliance. Ankara has ignored Washington’s demands to pull out of the deal. For his part, U.S. Vice President Mike Pence warned Turkey that it risks its membership in the North Atlantic Alliance and its participation in the F-35 program. A few days prior to his arrival in Moscow, Erdogan confirmed that deliveries of the S-400s will begin in July. The Turkish leader noted that Washington had offered Ankara the U.S.-made Patriot air defense system, however saying that Washington’s offer is not as favorable as Russia’s. The United States and other NATO allies claim the S-400s are not compatible with the Alliance’s weapons systems. For its part, Washington has expressed concerns that their use by Turkey could present a threat to the security of the U.S. F-35 fighter jets that Turkey intends to acquire from the United States.

At the Kremlin meeting, both parties held talks on the completion of a pipeline that will carry more Russian gas to Turkey (and may possibly be extended farther, to the Balkans), Moscow’s plans to construct a major electric plant in Turkey while mentioning other economic projects. Erdogan bragged that the number of Russian tourists who visited Turkey in 2018 reached a record high of 6 million. The Turkish leader has also announced that the two countries plan to note a fourfold increase in their annual trade volumes, from $25 billion to $100 billion. Vladimir Putin said the offshore part of the Turkish Stream pipeline running through the Black Sea has been almost completed and is scheduled to become operational later this year.

Moreover, Russia and Turkey have closely coordinated their moves in Syria where the last year’s agreement on the ceasefire in the rebel-controlled Idlib region is still in force. A few weeks ago, joint Russian-Turkish patrols began to control some parts of the demilitarized zone around Idlib. Both Turkey and Russia are also in hopes of Washington’s withdrawal from Syria. The Idlib enclave has remained the main point of contention. Although Ankara-loyal rebels are gradually losing their influence in favor of al-Qaeda Islamists, Erdogan has long pushed for obstructing the offensive, preventing al-Assad’s goal from being implemented. If the Idlib-based rebels surrender, Ankara will lose an important argument in their negotiations on solving the problem of the Kurdish autonomy in northern Syria.