Russian President Vladimir Putin has outlined general plans for the Arctic expansion. Speaking at the International Arctic Forum in St. Petersburg, Putin committed to developing naval ports and routes while expanding the energy sector (LNG) and the Northern Sea Route as a safe and economically viable route for international maritime shipping. He also urged Russia’s foreign partners to take active participation in the Arctic development. This is, however, doubtful to ease concerns expressed by other countries, worried about the Kremlin’s planned military buildup in the region. Also developing the Northern Sea Route has deemed doubtful as the lane is said to be unavailable for foreign shipping companies and ships sailing under foreign flags. 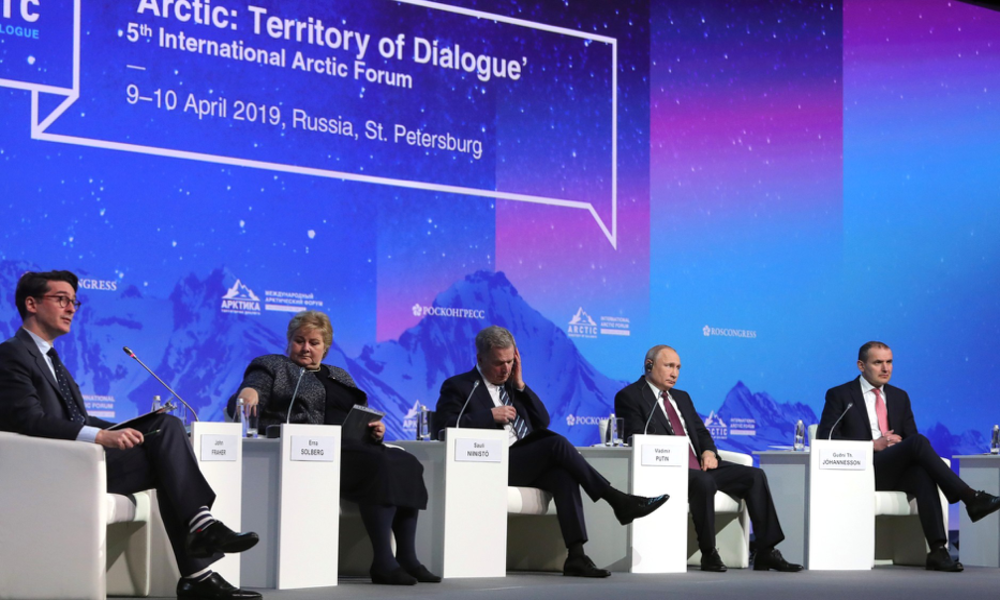 The annual conference of the International Arctic Forum in St. Petersburg took place between April 9 and April 10, bringing together both countries and private leaders interested in the current situation in the Arctic. This year the event was attended by the heads of Finland, Iceland, Norway, and Sweden, to whom President Vladimir Putin addressed his words, calling Moscow’s foreign peers for cooperation in building ports to become Arctic’s shipping hubs.

Addressing the audience at the plenary session on April 9, Putin announced his intention to adopt a new strategy for the development of the Russian Arctic until 2035. Under the plan, the Kremlin seeks to stimulate new investments in the region; as estimated, the Russian Arctic accounts for 10 percent of all Russian projects. One of their key priorities would involve hydrocarbon extraction, which seems to explain why Putin invited all Russia’s colleagues to “take part in joint projects in shipbuilding, navigation safety, environmental protection, minerals production, and bioresources harvesting.” Western sanctions, imposed on Russia after 2014, dramatically limited Moscow’s access to cutting-edge technologies that had yet sought indispensable for extracting resources from the Arctic seabed. This is why the Russian leader mentioned the idea of establishing “international research teams and alliances of high-tech companies” as Moscow expects to take advantage of some of the Western technology on the pretext of scientific cooperation. In his address, Putin said that Western restrictions, which “do exist” and “are harmful,” will by no means hinder Moscow’s plan for upgrading the Arctic facilities. As he pointed out, Russia’s domestic liquefied natural gas (LNG) sector has been developing despite major obstacles while the first shipment from Yamal LNG facilities, launched back in December 2017, was successfully exported to the United States.

Putin paid most attention to addressing intentions to develop “the global transport corridor that includes the Northern Sea Route” and “which will be functioning without fail year round.” Russia is the world’s only country to dispose of a fleet of nuclear-powered icebreakers, and it has informed about its plans to increase their number from four to nine by 2035. It also has four nonnuclear vessels in its inventory. The main aim is to make the Northern Sea Route “safe and commercially feasible.” Putin has set a goal for the amount of cargo carried across the shipping lane to rise to 80 million tons by 2025, from the 20 million tons transported in 2018. Russia has invited its foreign partners to join it in their “efforts to create hub ports at the endpoints of the route” to be set up in Murmansk and Petropavlovsk-Kamchatsky. Also, Putin has announced a series of facilities for investors.

Referred to as conciliatory and focused on economic issues and partnership with other countries, Putin’s speech was aimed at appeasing its foreign peers who have voiced deep concern over the Kremlin’s plan to militarize the Arctic region. The goal is both to dislocate new military units to the area and to modernize and expand already existing Soviet-era bases across the region. Furthermore, the Kremlin seeks to establish its fifth military district, covering with its scope the Far North in the European part of Russia and Arctic islands stretching along the coast, to the Kamchatka Peninsula in the east. Back in 2017, Jim Mattis, who served as the U.S. Secretary of Defense at that time, warned against Russia’s growing military potential in the region, saying that “the Arctic is key strategic terrain” and “Russia is taking aggressive steps to increase its presence there.” At the Arctic forum, Russian Foreign Minister Sergei Lavrov defended Moscow’s military buildup, saying that it poses no threat to anyone while intending to ensuring sufficient defense capabilities given political tensions around the country’s borders. The shrinking polar ice in the Arctic region is in the long run expected to offer new opportunities for resource exploration and the development of new shipping lanes, involving Russia, the United States, Canada, Denmark, and Norway into a competition for jurisdiction in the region.