On November 11, the “elections” for leaders and “parliaments” of the self-proclaimed Republics of Donetsk and Luhansk were held in the part of Ukrainian Donbas occupied by Russians. The results were predictable – the current leaders have won. Therefore, the elections will bring no change in Donbas. However, they will contribute to the peace process. Moscow committed a severe act of provocation which is impeding negotiations and can even result in new sanctions. The organisation of the “elections” in occupied Donbas is a part of the Kremlin’s confrontational policy towards Ukraine and the West. 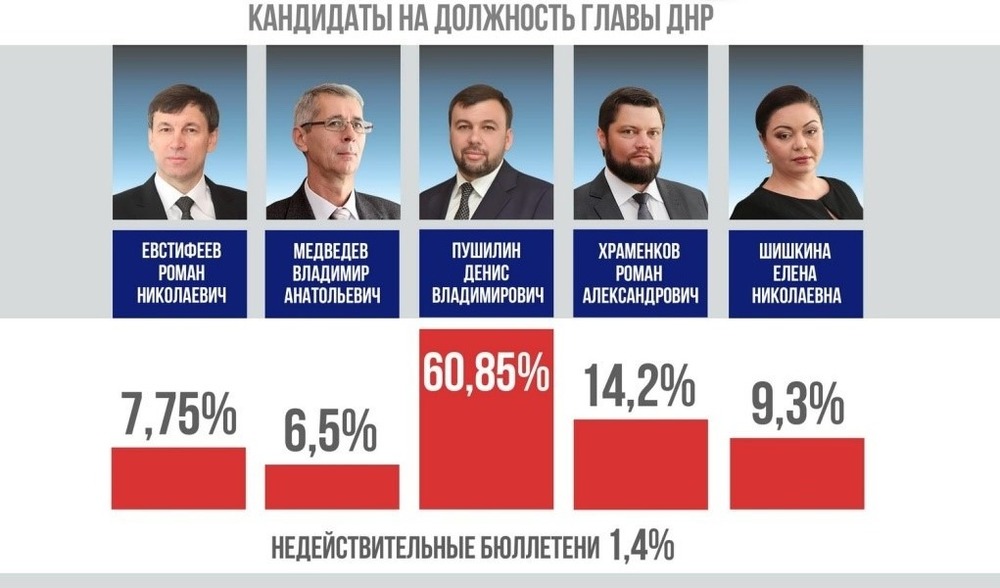 The date of the elections has been announced by the separatists in September, after the death of Alexander Zakharchenko, the leader of the so-called Donetsk People’s Republic in the bomb attack on August 31. It was obvious that this would be only a formality, as Moscow had already designated the leaders of Luhansk and Donetsk. In DPR, five candidates for the leader of the republic were registered, but four of them were only a background for Denis Pushilin, acting as the leader. In LPR there were four candidates but only Leonid Pasechnik, acting as the leader, was taken into account. Pushilin took over the position of Zakharchenko who was killed in the assassination, and Leonid Pasechnik replaced Igor Plotnitsky who was removed from his office in the coup d’état. [Donbass Coup D’état – an Analysis]. According to the organisers of the “elections”, Leonid Pasechnik gained 68.3% of votes, and Denis Pushilin 60.9% – they both have won in the first round. In the “elections” for the “parliament” in Luhansk, 74,12% of votes were gained by “Peace for Luhansk region” movement and “Luhansk economic union” movement gained 25,16%. In Donetsk, “Donetsk Republic” movement got 72,74% and “Free Donbas” movement got 25,56%. The turnout was 77% and 80% in Luhansk and Donetsk Republics respectively. The advisor of the President of Russia, Vladislav Surkov had immediately congratulated the winners. In his letter, he wrote that the high turnout showed the world that proud and wise nation lived in Donbas which did not accept the policy of Kiev. Surkov has for years curated occupied Donbas and is responsible for the policy towards Ukraine in the Kremlin.

All the mentioned data cannot be verified because the number of people entitled to vote was not provided. The internationally approved controlling and observing mechanisms were not applied as well. “Fake elections” are not recognised neither by Ukraine, nor by the West. The President of Ukraine Petro Poroshenko announced that by conducting these elections, Russia confirmed that it was occupying part of Ukraine. Kiev and Western states point to the fact that conditions of the Minsk agreements were not fulfilled in order to be able to conduct such elections (the end of acts of war, the retreat of the Russian army, the border with Russia under control of Kiev, international observers). Moscow replies that the “elections” on November 11 are not in contradiction with the Minsk agreements because they are not local elections. The President of Ukraine expressed his hope that the “elections” would result in new sanctions against Russia imposed by the West.