Press conference at the Embassy of Azerbaijan

On Tuesday, October 6, H.E. Ambassador Hasan Hasanov held a press conference with representatives of the media and Polish think tanks at the Embassy of the Republic of Azerbaijan in Warsaw. The meeting concerned the position of Azerbaijan on the clashes taking place in Nagorno-Karabakh. 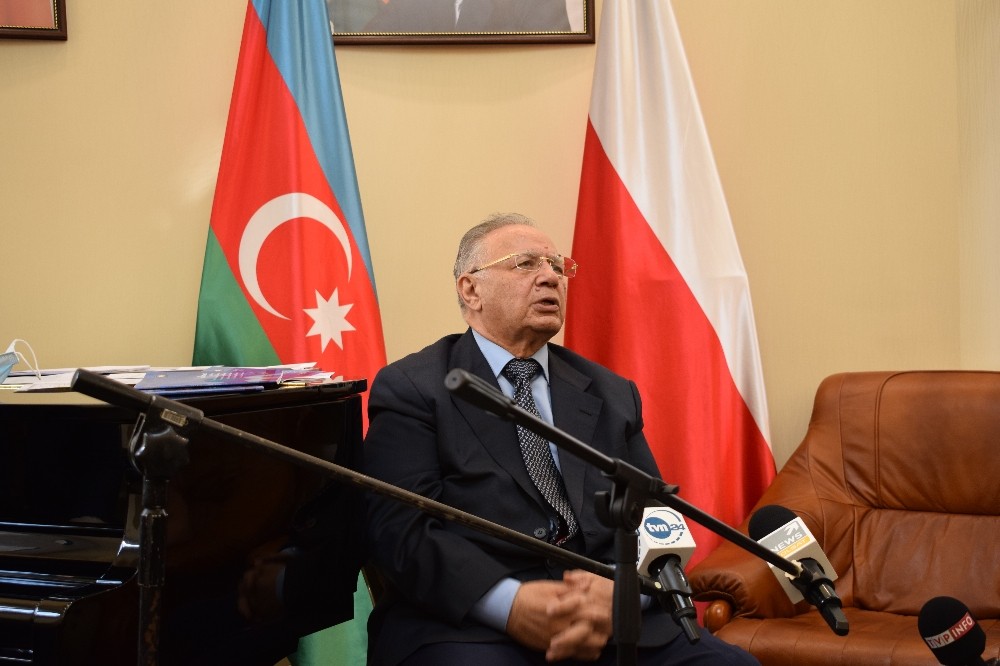 During the event, the Ambassador summarized the history of Armenia–Azerbaijan relations and presented the background of the conflict between the two nations, referring to a broader historical and political context. As he said, the conflict dates back to the beginning of the 18th century. Hasan Hasanov often referred to four UN Security Council resolutions that confirm the integrity of Azerbaijani territory and call on the Armenians to withdraw their troops from Nagorno-Karabakh territory. He stressed that the war is currently taking place on Azerbaijani territory and not in Armenia. While describing current events in the Caucasus, the Ambassador made numerous references to European history, comparing the current situation to the struggle of European countries against the Nazi occupation during World War II which was an armed conflict rather than peaceful negotiations. Additionally, he urged not to hold any prejudices against Azerbaijan, based on differences in religions, referring to the announced documentary produced by the Polish Television, which defines the parties to the conflict as “Armenian Christians” and “Azerbaijani Muslims.” Asked about the matter of starting negotiations for a peaceful resolution of the conflict, Hasan Hasanov referred to the Middle East war scenario, where in 1998, after Iraq failed to meet the UN resolution, the United States and Great Britain carried out a three-day bombing.

In response to the Warsaw Institute’s question about Azerbaijan’s position on accusations of Syrian jihadists’ involvement in the fight against Armenia, the Ambassador replied that the allegation was made by Emmanuel Macron basing on information provided by Armenia. The President of Azerbaijan, Ilham Aliyev, was to demand on several occasions that the French leader provide evidence to support his claim. To date, no response has been received. The population of Azerbaijan is three times the one of Armenia, which means that the Azerbaijanis do not need any additional military support – especially in terms of troops. Further accusations suggested that Armenians are bringing “unknown veterans” from other countries and concealing them as Armenian soldiers.

With regard to the call for an “immediate cessation of hostilities” by Russia, France and the United States in addition to the announcement by the Armenian Minister of Foreign Affairs of readiness “to re-establish a ceasefire regime based on the 1994-1995 agreements,” the Ambassador referred to the unfulfilled UN Security Council resolutions which ordered Armenia to withdraw its troops. Azerbaijan’s ongoing military actions were motivated by the lack of pressure from the Minsk Group to comply with the resolutions and the lack of systemic pressure in the form of sanctions. The Ambassador stated that currently the issue is not to avoid an escalation of the conflict, but to eliminate its source.

In the context of mediation proposals from the Minsk Group as well as Iran, Georgia and Qatar, H.E. Hasanov stressed that the intermediary would have to convince or force Armenia to withdraw its troops. In the eyes of Azerbaijan, all negotiations were broken off when Armenian Prime Minister – Nikol Vovai Pashinyan, announced that “Karabakh is Armenia.” The Azerbaijani Ambassador declared that it is time for action, not talk.

Asked about the prospects of the conflict, H.E. Hasanov once again called on the countries of the world to demand that Armenia withdraws its troops. So far, he said, “the world has remained silent.” Trying to understand the enemy country’s motivation to act in relation to the territory, the diplomat quoted statistics on 30,000 Armenians migrating to the West, including Poland, annually. In light of this, he cannot understand why the authorities of the hostile nation are trying to settle thousands of Syrian and Lebanese Armenians not on their own land, but in Azerbaijan.

Furthermore, a question was asked why the government does not provide data on the victims among the Azerbaijani people in recent border clashes. In a response it was stated that “the struggle for the homeland is not a question of statistics but of the moral and patriotic spirit of the nation.”