The collapse of the ‘Iron Curtain’ has brought an end to the great Superpowers rivalry, that over the years lead to countless armed conflicts throughout the globe. At the same time the end of the USSR has also led to the emergence of new nation-states built on the grounds of the former Soviet republics, suddenly awaking old animosities and dormant regional conflicts. The most accurate example of this is the ongoing Nagorno-Karabakh conflict between the Republic of Armenia and the Republic of Azerbaijan. To this day, the dispute between the two nations has not been resolved and although for most of the time the conflict remains non-physical, the violence and clashes between the two sides erupt from time to time, leading to the deaths of both soldiers and civilians on both sides. In the recent days the conflict was once again reignited when on July 12th the fighting broke out on the border resulting in the deaths of 20 people. 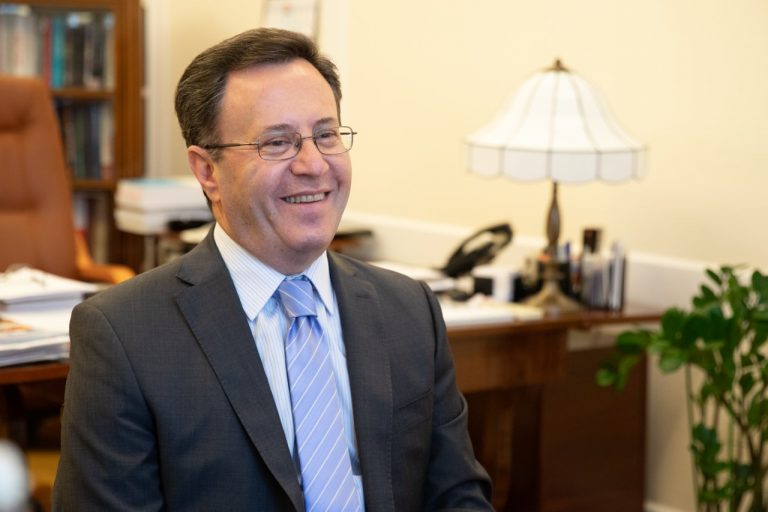 His Excellency Samvel Mkrtchian, Ambassador of Armenia to Poland

The Warsaw Institute, in its mission to analyze the current world affairs and to inform our readers about these developments in the most impartial and objective manner, asked the Ambassadors of both Armenia and Azerbaijan in Poland to presents their view points and supporting arguments regarding the recent conflict and the events leading up to it. With that being said we are proud to present to you the interview with HE Samvel Mkrtchian of Armenia, whereas a conversation with HE Hasan Hasanov of Azerbaijan can be found here.

Julia Grzybowska, President of the Board of Warsaw Institute: Why has the conflict between Azerbaijan and Armenia re-ignited in the recent days?

HE Samvel Mkrtchian, Ambassador of Armenia to Poland: There is enough clear evidence that the most recent escalation of the situation on the Armenian-Azerbaijani border in the Northern Tavush region is the logical outcome of pugnacious policies of Azerbaijan. If one follows the warmongering rhetoric of the President of Azerbaijan, the Defense Minister and other high ranking officials pronounced during last weeks and months advocating for a military solution to the Nagorno Karabakh conflict, you see that the provocation which triggered the developments starting July 12th was not out of the blue. The Armenian side has been continuously warning its international partners that this type of situation is of high probability and, preventive and restraining political and diplomatic steps should be taken to tame the Azerbaijani ill-intentioned fervor. To our disappointment, our warnings have been somewhat overlooked.

JG: Are the reasons behind the recent altercations similar to the original causes of the 1988 Nagorno-Karabakh War? What was the moot point?

There could be certain similarities. In 1988 the conflict in Nagorno Karabakh started with the Azerbaijani attempt to suppress by brutal military force the peaceful self-determination movement of the people of NK. They spectacularly failed then. Instead of learning lessons, unfortunately, now the Azeri leadership is bringing false historic territorial claims also against Armenia itself. It is in line with the long sustained Azeri narrative that the conflict has always been between Armenia and Azerbaijan and, Nagorno Karabakh with its legally elected authorities has no distinct role to play. Such kind of approach and behavior are not justified whatsoever, and further push away the chances of a peaceful and negotiated solution to NK conflict which is the solely viable option for the Armenian sides and the international community.

JG: What is the role of Turkey and Russia in the Caucasus and how does it affect the recent conflict?

The two countries are acting completely differently. Turkish Defence Minister, Foreign Minister, the President and other officials in the course of the last week have already made several statements and comments voicing their unequivocal support to Azerbaijan, also in terms of possible military involvement. This is extremely unhelpful and not only encourages and emboldens Azerbaijan to continue along the dangerous path of escalation, but also raises profound questions on whether that country can play any credible and positive role in the South Caucasus. At this point it is abundantly clear that Turkey is a destabilising factor in our region and a serious challenge to Armenia’s security. Moreover, Turkey’s attempts to intervene in the conflicts in its neighbouring regions has already undermined the security and stability thereon.

These facts make even more impossible for Turkey to play any role in the issues related to the Nagorno-Karabakh conflict, within international, and particularly the OSCE framework. Armenia will continue to consistently work towards maintaining and strengthening the international and regional security, while closely cooperating with international partners to this end.

To the contrary, Russia, though being an ally to Armenia and being bound by military security agreements, opted a balanced approach offering its mediation services not only as the co-chairman of the OSCE Minsk Group, but in its national capacity as well.

JG: What kind of actions should both countries undertake to fix Baku-Yerevan relations?

The situation we are currently in, necessitates as quick as possible to engage in negotiations in good faith. Azerbaijan should eventually comprehend that we live in the same region and we need to build a common security space. To achieve that goal, in the first place, the right of Nagorno Karabakh people to self-determination should be unconditionally respected, international legally binding mechanisms should be utilised to exercise it and define the status of NK. By doing so the full potential of the South Caucasus will be unblocked and we all will equally benefit.

JG: Would you like to see the involvement of international organisations in the peace process building?

We, as well as the majority of international community, stated that the OSCE’s Minsk Group Co-chairmanship – comprising France, United States and Russia, is the only internationally recognised format to mediate peaceful negotiations for a lasting settlement to the NK conflict. And any supportive involvement of other international organisations should be closely coordinated and consulted with Co-chairs. Unfortunately, we have witnessed in the past that when another approach is taken by those international organisations, often, if not intentionally but even inadvertently, it could bring more harm than good to the peace process.

JG: Since 2016 both sides reported numerous cyber-attacks on its infrastructure – Do you think that this still remains a danger to Armenian security? How Armenians protect from cyber-attacks? Is cybersecurity an important priority for the current government?

Armenia is not alone. Almost all countries have become vulnerable to cyber-threats and actual cyber-attacks. New definitions have been coined like cyber warfare, hybrid warfare. It is extremely worrisome that cyber-threats will be increasing in the future and so will be the destructive power of such attacks. The main source of such attacks on Armenia comes from our neighbour Azerbaijan. They employ special groups of hackers for that purpose and openly present breaches of Armenian web-sites. Of course we do a lot to protect ourselves in the cyber-space through building firewalls and sophisticated computer networks. At the same time we believe that we should get together as the international community and elaborate a kind of code of conduct for cyber-space. Otherwise it is going be a very dangerous and incrementally unpredictable world we will be living in.

JG: Has Armenia been a victim of disinformation campaigns both domestically and abroad? What exactly happened? How to combat this threat?

Disinformation, fake news, misinformation – in a broader term infodemia, has become part of our daily lives, like it or not. It has always been out there, but with the new reality of digital age, social networks that phenomenon and its corrosive impact has grown exponentially. Quite naturally, we are also affected by it. What can be done to counter and to minimize the damage? Obviously, the most effective course of action is to vigorously and tirelessly offer the true and objective information, to reveal the real motivation of those who stand behind the disinformation, educate the public to be more “media literate” and proficient in discerning the truth from lie.