No chances of Russian military base in Sudan

It has been long speculated that new Russian military bases would be established in such countries of the Eastern Mediterranean as Egypt, Libya and Cyprus. Now it is time for Sudan. However, the rise of Russia’s political and military activity in the Red Sea region does not necessarily mean that the Russians will build their military base on the Sudanese coast. Such a plan will not be possible due to the interests of several countries interested in this strategic region. Also Sudan’s intentions seem to arouse some doubts as inviting Bashir may constitute only a part of a game aiming to strengthen his position. 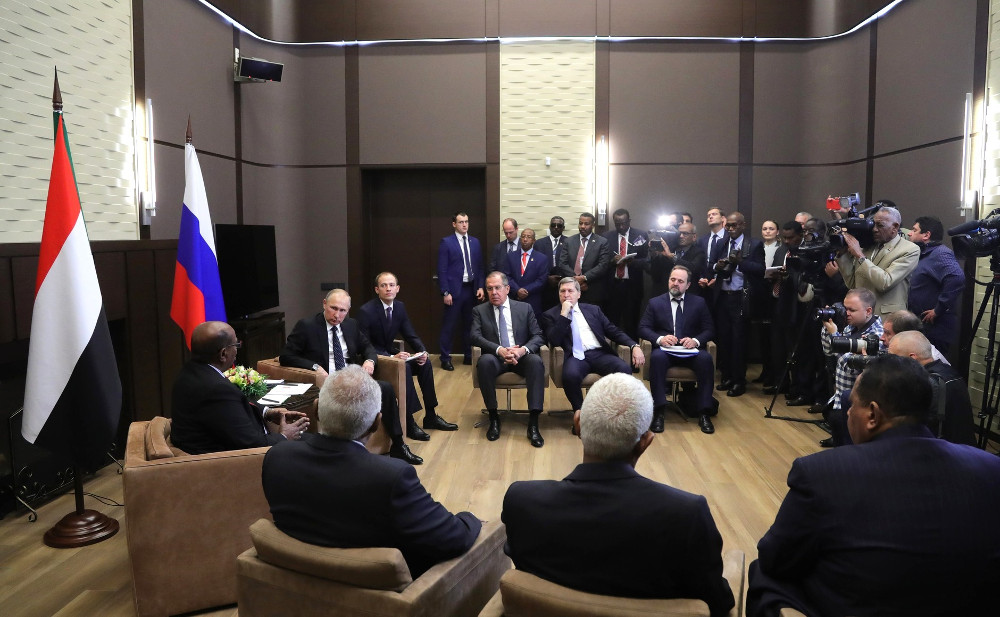 The Russian media have unofficially reported about the first unit of mercenaries from the “Wagner” private military company who had been allegedly sent to Sudan. The agency is known for its military involvement in Donbass and Syria. It is not known whether the information is true. But it is known that Moscow has become increasingly interested in Sudan as, in 2015, Russian engineers discovered large gold deposits, which made it possible for the country to sign the biggest investment deal in its history. In July 2017, Mr Bashir was invited to Russia at the invitation of President Vladimir Putin. For years, the Kremlin has not been disturbed by the fact that Sudan’s president was wanted by the International Criminal Court on charges of genocide. Putin sent a Russian plane to Khartoum in order to secure the Bashir’s delivery to Russia. The meeting took place on November 23, 2017.

Bashir immediately asked Putin to protect his country from the United States and accused the USA of splitting oil-rich South Sudan in 2011. Instead, Bashir promised Putin that his geostrategically positioned state could function as Moscow’s “key to Africa”. He is allegedly interested in purchasing Su-30 and Su-35 fighter jets, missile boats, minesweeper and missile systems, including S-300 systems. In 2016, it turned out that Russia had agreed to export 170 T-72 main battle tanks (MBT) to Sudan. Nevertheless, it is not known how poor and heavily indebted Sudan is going to pay for the next supplies of Russian weapons. President Bashir suggested a military base on the Red Sea in the region of Port Sudan. Also Russian MPs have already expressed great interest in constructing such a base. However, both Putin and defence minister Sergey Shoigu seem to be more cautious since building such a base from scratch would involve considerable financial outlays. And Russia needs money to expand its military bases in Syria. There is one more political question to be answered since the Russian project in Sudan would be controversial not only among Moscow’s enemies.

A Russian base located only 300 kilometers from Jeddah would be considered by Saudi Arabia as a threat to its security as well as to the security of oil and gas supplies from the Persian Gulf to Europe. Another country that would not be satisfied with such a state of matters is China as it has been building its zone of influence in Africa for a long time. The Russian base could also weaken the position of Ethiopia, considered as a military power in that part of Africa. According to Sudan, the Ethiopians may constitute a counterbalance to Egyptian-Eritrean alliance. Also Turkey takes part in this complicated game. The president of the country, Recep Tayyip Erdogan, has recently visited Sudan. In addition, Bashir offered him a similar offer to the one he had made to Putin. The Sudanese are ready to lease Suakin Island, situated near Port Sudan, to Turkish investors. As a result, Ankara would expand the tourist infrastructure and change the island into a transit point for pilgrims going to Mecca. Such an idea is strongly disapproved by Egypt, whose authorities consider it as an attempt to deploy Turkish troops in Sudan. Interestingly, the latter have already been sent to Somalia. So Cairo sent its army to its border with Eritrea. Such a situation only aggravated the Sudanese-Egyptian conflict; Cairo accuses the Sudanese of supporting the Muslim Brotherhood, while Khartoum blames the Egyptians for supporting South Sudan.

Russia seems to maneuver between Cairo and Khartoum: Sudanese perspectives are tempting, but, on the other hand, Moscow has recently improved its relations with Egypt. On December 11, Putin paid a visit to Cairo, during which new economic agreements were signed. Also military cooperation between Russia and Egypt seems to be getting closer and it involves for example joint military exercises or using partner’s military bases. The situation is additionally complicated by the U.S. policy. In October, the Trump administration decided to permanently lift the sanctions that Washington imposed on Khartoum in 1997. The Americans seem to be satisfied with the steps undertaken by Bashir. It can be exemplified by the participation of Sudanese troops in the Saudi Arabian war against the Shia revolt in Yemen or supporting diplomatic boycott of Iran in 2016. It is possible that Bashir, who allures Russia or Turkey with military bases, seeks to gain an argument against the United States. The main purpose is to guarantee that the dictator will remain in power after the 2020 election.