“The Next Chernobyl”: Giant Diesel Spill in Siberia’s Norilsk

An oil leak released diesel into the Arctic Ocean as officials were slow to respond, both due to human error. A whole array of mistakes was made by both local senior officials and the owner of the thermoelectric power plant that let diesel oil escape in the water bodies. These are yet intrinsically linked one to another, as local politicians have long relied financially on Russia’s mining giant Norilsk Nickel (Nornickel). The leak can have a severe impact on the local ecology. Many say the oil spill was the worst such accident ever in the Arctic region. 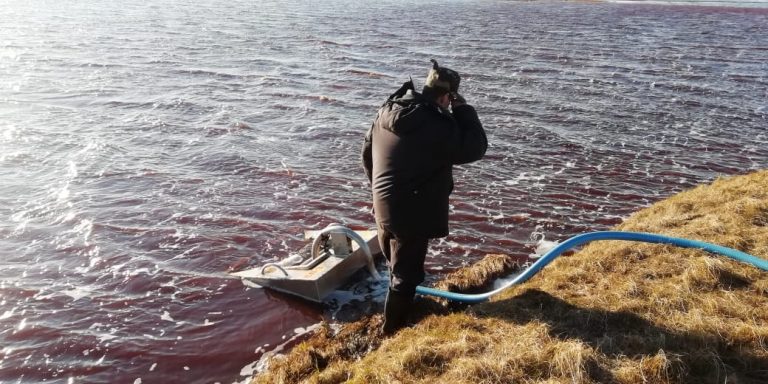 The May 29 accident saw over 21,000 tons of diesel fuel escaping from a storage tank at the thermal power plant in Norilsk, a city in Western Siberia. Yet state officials only learnt about the incident on May 31, chiefly from videos posted on social media showing polluted red-tainted water in the Ambarnaya river, and not from a statement from Russian mining conglomerate Norilsk Nickel, or Nornickel, that owns the facility. Russia’s President Vladimir Putin declared a state of emergency on June 3. Thus clean-up teams arrived in Norilsk with a two-day delay. The spill massively polluted the Ambarnaya and Daldykan rivers. Oil has also reached Lake Pyasino, a major body of water and the source of the Pyasina river that feeds the Kara Sea, which is part of the Arctic Ocean. Though Russian Minister for Emergencies Yevgeny Zinichev, who in the past served as FSB deputy chief and Putin’s security officer, on June 5 said that clean-up teams had managed to stop the spread, it is much worse than that. Throughout the week roughly 2 percent of fuel has been collected as the Ambarnaya river is difficult to clean up because of adjacent swamps and wetland tundra. Boom obstacles were indeed placed in the river but they can just contain crude oil spills. Diesel fuel is more toxic to clean up as it dissolves in water, causing the environmental damage to the fauna and flora on the river bottom. Thus they can in no way be collected. Due to the magnitude of the spill, the clean-up operation might take whole months. The area will need years, or even decades, to recover from the spill.

The owner of the thermoelectric power plant that owns a damaged oil tank blamed global warming. The oil storage tank was built on permafrost which has weakened over the years owing to climate change; so was Norilsk and whole northern provinces of Russia. Arctic permafrost has been melting in abnormally warm weather for this time of year, with cracks in roads, rail tracks, and buildings reported throughout Siberia. Yet there are various monitoring tools already in place. Nonetheless, the thermoelectric power plant visibly lacked one though it was built in the early 1980s. No cracks were reported in the tank’s floor – and thawing permafrost could no longer support its weight. In consequence, one of the tank’s pillars collapsed, letting toxic substances penetrate further into the land strip between the plant and the river. A special committee will investigate the origin of the Arctic oil spill. Possibly thawing permafrost had caused one of the tank’s pillars to collapse, yet this is not a foregone conclusion. Earlier check-ups had revealed the tank being in a poor condition, with evident corrosion stains on its steel walls. Of course, Nornickel ignored these flaws. The firm is the world’s leading producer of nickel, palladium, and platinum, and a state within a state in Russia’s North. Vladimir Potanin, Russia’s wealthiest man and the largest shareholder in Norilsk Nickel, has pledged to pay for the clean-up mission. Of course, the Kremlin would dismiss the idea of ousting Potanin, a servile oligarch whose company is by far the biggest taxpayer in Russia. This is also a warning sign for Putin. The Russian leader is unable to control everything in the country, local senior officials conceal its problems, as was the case in Chernobyl, while industrial infrastructure is falling into ruin.