During four years of battles in eastern Ukraine, Donbas has become a real test site for the most modern Russian military equipment: from tanks and artillery, to unmanned aerial vehicles, flying platforms and radiolocation systems. Despite the ceasefire and general decrease in the intensity of fighting, in comparison to the beginning of the Russian-Ukrainian conflict, Ukrainian soldiers and international observers still collect evidence of the Russian participation in the warfare. 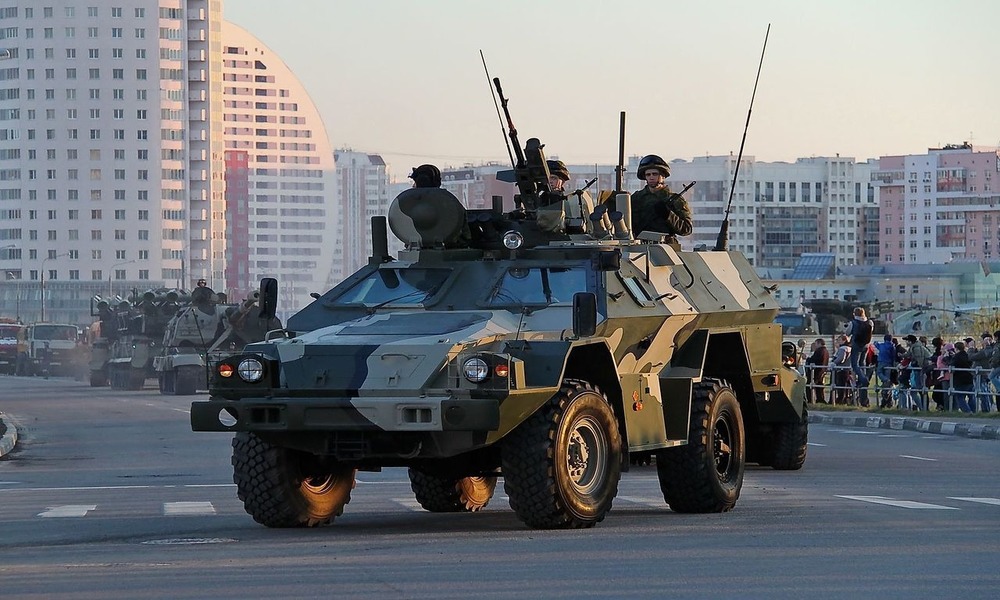 At the beginning of the war, a sudden possession of the military equipment by pro-Russian separatists was explained by the Russian propaganda with the takeover of the tank base in Artemivsk where almost 800 units of armoured vehicles, including up to 250 tanks, were being refurbished. In fact, in spring and summer 2014, separatists tried to take over the base five times. Once even with the use of a tank. All attempts were unsuccessful.

Several metres long columns of Russian military equipment without identification marks, uncovered, regularly cross the Russian-Ukrainian border which is not controlled by Ukrainians. The mass transport of such amount of equipment and weapons cannot be camouflaged. An attempt to mask them would cause delays in supply of armament for bandit groups fighting for the Russian Federation.

On August 7, this year, at 11 p.m., an Unmanned Aerial Vehicle (UAV) of the OSCE Observer Mission registered the movement of two such columns in the occupied part of Donbas. One column with equipment entered Ukraine in Manych, which is located 70 km from Donetsk. At the same time, the second one was moving in the opposite direction and crossed the Ukrainian-Russian border.

Serhiy Nayev, Commander of the Ukraine’s Joint Forces (Ukr. Операція об’єднаних сил) stressed that crossing the Ukrainian border, which was not controlled by joint forces or State Border Guard Service of Ukraine was happening constantly. According to Nayev, it is a positive fact that OSCE finally registered the crossing of the Ukrainian border, which is a classic example of the Russian invasion, by a column of heavy-loaded trucks from the Russian territory, about which Ukraine had informed the international community many times.

According to data of the Ukrainian secret intelligence, since the beginning of 2018, 40 armoured fighting vehicles have been additionally delivered to Ukraine in order to exchange the broken ones which were in need of repair and could not be fixed in the occupied territories.

Experts claim that active transfer of military equipment from Russia allowed the groupings from the so-called Donetsk and Luhansk People’s Republic (DPR and LPR) to establish a considerable armoured group. According to the Ukrainian secret intelligence, pro-Russian warriors have in their arsenal 475 tanks, about 1000 armoured fighting vehicles, over 700 artillery systems and over 200 reactive missile systems. This is mainly Soviet equipment which was passed to the, so-called, first and the second “military corps” of DPR and LPR groupings.

In over four years of warfare, the InformNapalm volunteer initiative registered in the occupied territory of Ukraine 44 different kinds of weapons which could only come from the territory of the Russian Federation – from trucks and tanks, to advanced systems of different kinds. For example: the “Pantsir-C1” missile system (Rus. «Панцирь-С1») armed with two paired 30 mm cannons was put into service in the armed forces of the Russian Federation in 2012 – Ukraine has never bought it.

This is the machine which was used to shoot down one of the Ukrainian warplanes in 2014. A year later, “Pantsir-C1” was seen in Luhansk, when Igor Plotnitsky was a leader of LPR. Sometime later the equipment was seen in Donetsk Oblast. The machine can be operated only by Russian officers as its service entails great technical skills which are being acquired for a long time.

T-72B3 tank (Rus. Т-72Б3) is the main battle tank of the Russian army. It differs from other tanks as it has a new fire control system with a Belarusian “Sosna-U” gun-sight (Rus. «Сосна-У»). It has been produced in Russia since 2011. It was not delivered to Ukraine. One of them was captured in Ilovaisk by Ukrainian soldiers.

BPM-97 (Rus. БПМ-97), which is a Russian light armoured vehicle, stands out from other armed vehicles. In various modifications, it has been used by the armed and special forces of the Russian Federation since 2009. It has not been delivered to Ukraine as well. Well known mercenaries of the ChVK (Rus. Частная Военная Компания) private military company, commonly known as the Wagner Group, tried their best to mask the use of BPM-97 in the Ukrainian front during the battle in Debaltseve. BPM-97 took part in the warfare in Syria.

This information, in addition to the mentioned, newest observations of the OSCE mission in eastern Ukraine were included in its recent report. In this report it is also stated that Russia was equipping separatists from Donbas with radio-electronic devices, such as the “Krasukha-2” (Rus. «Красуха-2» (1Л269)), “Bylina” (Rus. «Былина» (РБ-109A)), “Repellent-1” (Rus. «Репелент-1») and “Leyer-3” (Rus. «Леер-3» (РБ-341В)). These are the most modern Russian systems which have started to appear in the Russian combat units after 2010 and have never been possessed by the Ukrainian army.

Mentioned “Leyer-3” jamming system works with the “Orlan-10” (Rus. «Орлан-10»). unmanned aerial vehicle. This modern Russian piece of equipment, used in combat units since 2010, can stay in the air up to 16 hours and reaches 120 km. Such a vehicle was shot down by Ukrainians in the war zone on June 5, this year.

Another Russian finding, the “PMN-2” (Rus. «ПМН-2») anti-personnel mine, was destroyed by the Ukrainian sappers at the end of July, this year. This mine causes severe damages of one or both legs. Depending on how one steps on it, it can destroy a foot or a leg to the knee.

The “PMN-2” mine is Soviet. Its reserves in Ukraine have been disposed of over 10 years ago. It is not used in the Ukrainian armed forces as it was banned by the Ottawa Treaty. This ammunition, however, remained in Russia.

Sometimes, pro-Russian fighters themselves eagerly show their military equipment on the Internet. They record and publish data which confirm the constant Russian presence in Donbas. However, the Kremlin still claims that Russia has nothing to do with the military conflict in eastern Ukraine.