The New Rules of the Central European Game

Besides the threat of a coronavirus pandemic, it is hard not to get the impression that Central Europe is becoming an increasingly important region in the power struggle of the world’s most influential countries. It is not surprising that the U.S., Russia, and China are trying to use every opportunity to strengthen their position in various countries of the region. However, what may come as a surprise to certain observers is the relative inaction of the biggest European actors in this struggle. It is clear that Paris and Berlin are focusing first and foremost on managing issues in the European Union, especially the ones connected with negotiations concerning the E.U.’s new multiannual financial framework. Furthermore, both German Chancellor Angela Merkel and French President Emmanuel Macron have to deal with internal crises in their respective countries. The result of the increasingly worsening poll results of the governing parties in Germany, the problems with CDU’s leadership, and the constant wave of anti-government protests in France is that neither Berlin nor Paris are as interested in Central Europe as they used to be. 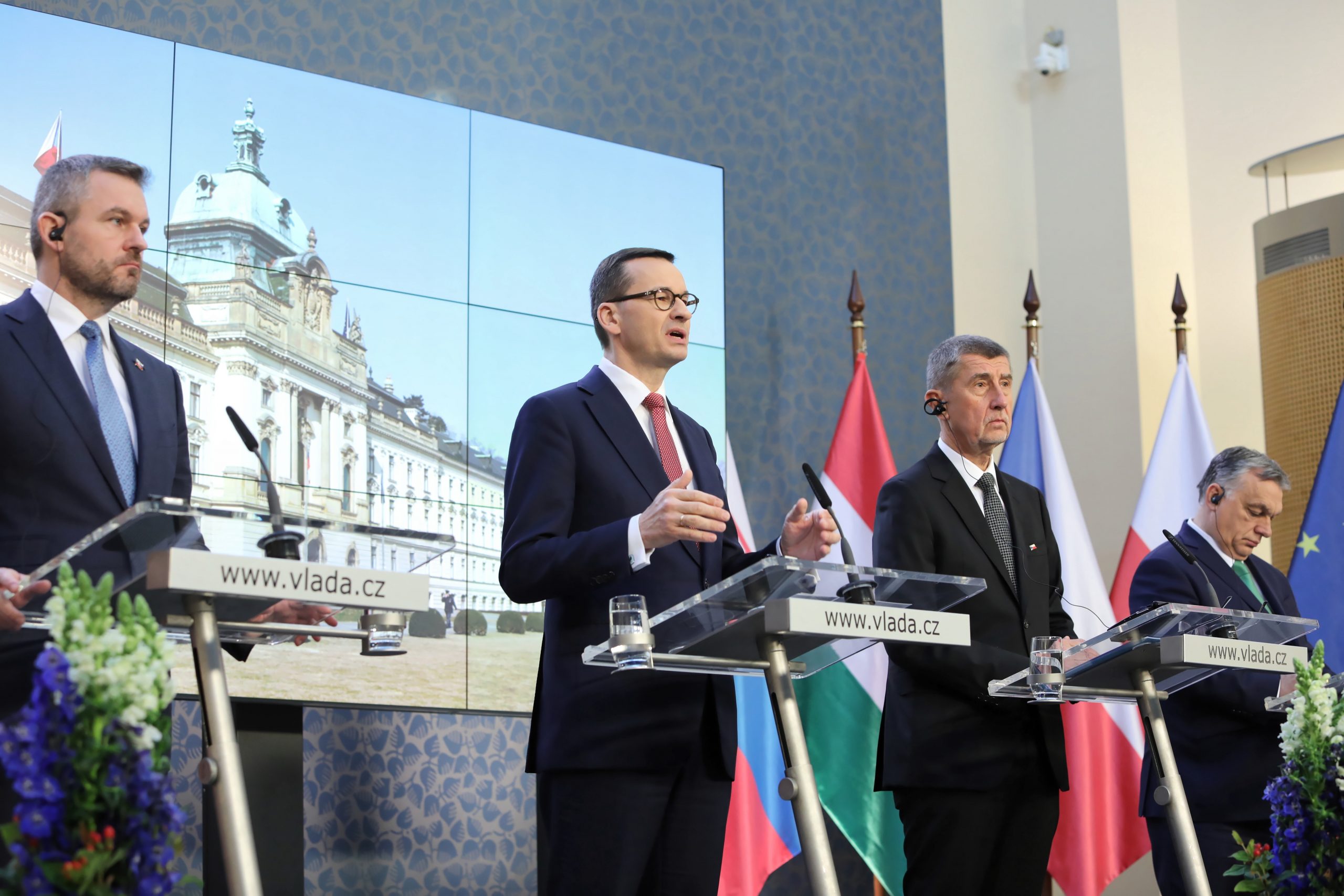 In this situation, the activity of other countries interested in the region is not surprising – as this is probably how recent events should be interpreted. The most important signal was the declaration of U.S. Secretary of State Mike Pompeo, who, in mid-February this year, declared his readiness to allocate one billion dollars to energy projects implemented in the countries of the Three Seas Initiative. A similar statement was given by U.S. Secretary of Energy Dan Brouillette, who confirmed at the annual Munich conference that the U.S. is ready to block the Nord Stream 2 project with effective sanctions. These two voices demonstrate Washington’s determination to join the Central European market. Washington has correctly noticed that there is a strong determination of decision-makers from many Central European countries to free themselves from the dependence of energy supply from just one source – Russia. The fight against the Russian monopoly has been included in the energy strategies of not only Poland but also the Baltic States and Romania.

All this creates a pleasant business environment that gives new dynamics to projects, especially energy-related, planned to be implemented under the Three Seas Initiative. It should be emphasized that building infrastructure connections in the North-South corridor and energy cooperation are examples of the pillars of this agreement. The first summits of the Three Seas Initiative took place in Dubrovnik in 2016, in Warsaw in 2017, in Bucharest in 2018, and Ljubljana in 2019. Their character was, above all, political, and they provided Central European heads of states with the opportunity to meet each other. Now, following these summits, it is necessary to move on to the implementation part of the project to make sure it is successfully executed. The launch of the first funds and the initiation of even several projects will demonstrate the growing importance of the Three Seas Initiative. This should be a clear signal, especially for hesitant countries, that the initiative is not limited to meetings of presidents. On the other hand, what is dangerous is that without specific infrastructure projects, the whole idea of the new form of regional cooperation could turn into annual meetings of politicians without much influence on the decision-making processes – and this may result in its failure. There is no guarantee that each of the regional cooperation projects will be a success – the best example of this is the history of the Central European Initiative. This project was launched in late 1989 with the intention to make it the main structure of Central Europe’s organization. Today, hardly anyone can remember what its goals were, or where its official headquarters were located. The Central European Initiative is a good example of how difficult it is for such ideas to move from the theoretical to the practical level, and that the very creation of the secretariat, the establishment of a formal institutional framework, and even a fixed budget do not yet guarantee success. The Three Seas Initiative is closer to the organizational format of the Visegrád Group, which – although established in 1991 – is still not a formalized international organization, but an institutionalized regional agreement. However, the Visegrád Group is today the most recognizable regional organization in Central Europe. The informal nature of this cooperation has one serious difficulty – it must continuously prove its usefulness, constantly mobilizing its members to be active and cooperate. This is definitely easier with a small coalition of stakeholders – such as the four Visegrád countries – but it is much more difficult with twelve countries – sometimes as far apart as Estonia and Slovenia.

The U.S. already gave its support for the project before, when President Donald Trump came to Warsaw in 2017 for the Three Seas Initiative meeting. After the first conference in Dubrovnik, at which the presidents or their representatives launched the informal initiative of twelve countries, not all invited countries shared the same enthusiasm for the new proposal for regional cooperation. After this inaugural summit, numerous voices were heard from experts who pointed out that the Three Seas Initiative project was imprecise and understated, especially in comparison with the well-functioning Visegrád Group. It was the visit of the President of the United States to Poland in the summer of 2017 and his unequivocal support for the new Central European cooperation project that determined the stability of the initiative. Exclusively for the President of the United States, the meeting place for Central European leaders was changed from Wrocław to Warsaw. Only the Business Forum was organized in the capital of Poland’s Lower Silesia – initially intended to host the most important event. In this context, the abovementioned Pompeo’s declaration could be seen as a signal of a need to reverse retreatment from the Three Seas Initiative. In a situation where only half of the countries participating in the project declared their interest in joining the financial mechanism of the Three Seas Initiative Fund established in 2018, and only four of them formally implemented it (Poland, Romania, the Czech Republic, Latvia), such a strong signal of support from the USA, the informal patron of the entire initiative, was more than welcome. Of course, this does not mean that American financial involvement is charitable. Firstly, Pompeo’s offer concerns only investments in the energy sector, not in infrastructure projects (especially roads and railways) and digitalization plans (which are essential for the process of catching up the innovative distance to Western Europe). However, this does not change the fact that the possible transfer of American funds to energy projects will allow local capital to be transferred to other areas.

Another element that could increase the importance of Central Europe is the joint-stock exchange CCE+ index launched in September 2019 by the Visegrád Group countries and the stock exchanges of Croatia, Romania, and Slovenia. Predominantly, it is an excellent form of promotion of the best companies in the region, the shares of which are offered to investors, and additionally, it strengthens their position on the market against the largest international giants. The intention behind the Three Seas Fund and the common stock exchange is to make them solve the region’s most significant problem – the lack of investment capital needed to launch infrastructure projects, both included in the list of joint actions of the Three Seas Initiative, and those of strategic importance for individual countries of the region. This does not mean, however, that such activities aim to build an alternative to the European Union – they are instead supposed to be complementary to it. Being aware of the financial consequences associated with the exit of the United Kingdom from the European Union, it is evident that the future E.U. budget will be smaller than the previous one. In addition, the shift of emphasis to the E.U.’s climate or migration policy, and now the anti-crisis policy in response to the uncontrolled pandemic, means that strategic infrastructure projects in Central Europe may lack funds from cohesion funds or other projects. Individual Central European countries have made great efforts to catch up with the founding E.U. members after joining the European Union – following difficult times they went through as part of the Eastern Bloc. This process is still unfinished, and if it stops, it may delay the alignment not only of living standards but above all of the development opportunities in respective E.U. countries. Without a substantial modernization “boom,” some sort of new Marshall Plan for the region, necessary to develop its infrastructure, communication, or digital standards, Central Europe’s economy may remain peripheral and support more modern industrial centers in the West.

The greatest threat to these plans at the moment is the coronavirus pandemic. Today (the text was written in March 2020), it is not known what the global consequences of the COVID-19 pandemic will be. On the one hand, the current situation has strongly damaged China’s image as a modern and attractive business and political partner. If more information about ignoring the threat, hiding the actual scale of the pandemic, or lack of cooperation in providing information to European partners spread to the public, people’s belief in the positive impact of cooperation with Chinese partners will be undermined. From the perspective of the authorities of particular countries, it will be hazardous in the new situation to postulate the deepening of cooperation with China, especially in ICT or investing in critical infrastructure. On the other hand, the impact of coronavirus on the economy is currently unpredictable. It may turn out that instead of international cooperation, it will cause isolationism, which will freeze various forms of cooperation in the existing formats. The unpredictability of the situation is also the greatest fear that paralyzes potential investors needed by Central Europe to implement all the intended plans and to guarantee its development. It is difficult to predict today how the whole European Union, and especially its institutions such as the European Parliament and the European Commission – already criticized for dealing with irrelevant issues and lack of appropriate reaction in their areas of competence – will deal with the crisis. The coronavirus pandemic will change the whole world, including the European Union and the Central European region. It will be crucial for the Three Seas Initiative to maintain its willingness to continue cooperation in the present format and to obtain real support from its external partners – first and foremost, from American investors wanting to strengthen their position on the energy resources market in this part of Europe.