Russia keeps boosting cooperation with the countries of Africa. Leaders from the Dark Continent pay regular visits to the Kremlin, almost all of which are accompanied by inking bilateral economic deals with Russia. Oil giants benefit from the Kremlin’s policy: while Lukoil has recently gained the opportunity to enter the Republic of Congo, Rosneft has its door open to Mozambique. And this will certainly not mark the end of its business chances, with the Russia-Africa summit scheduled to take place in the resort town of Sochi in October. 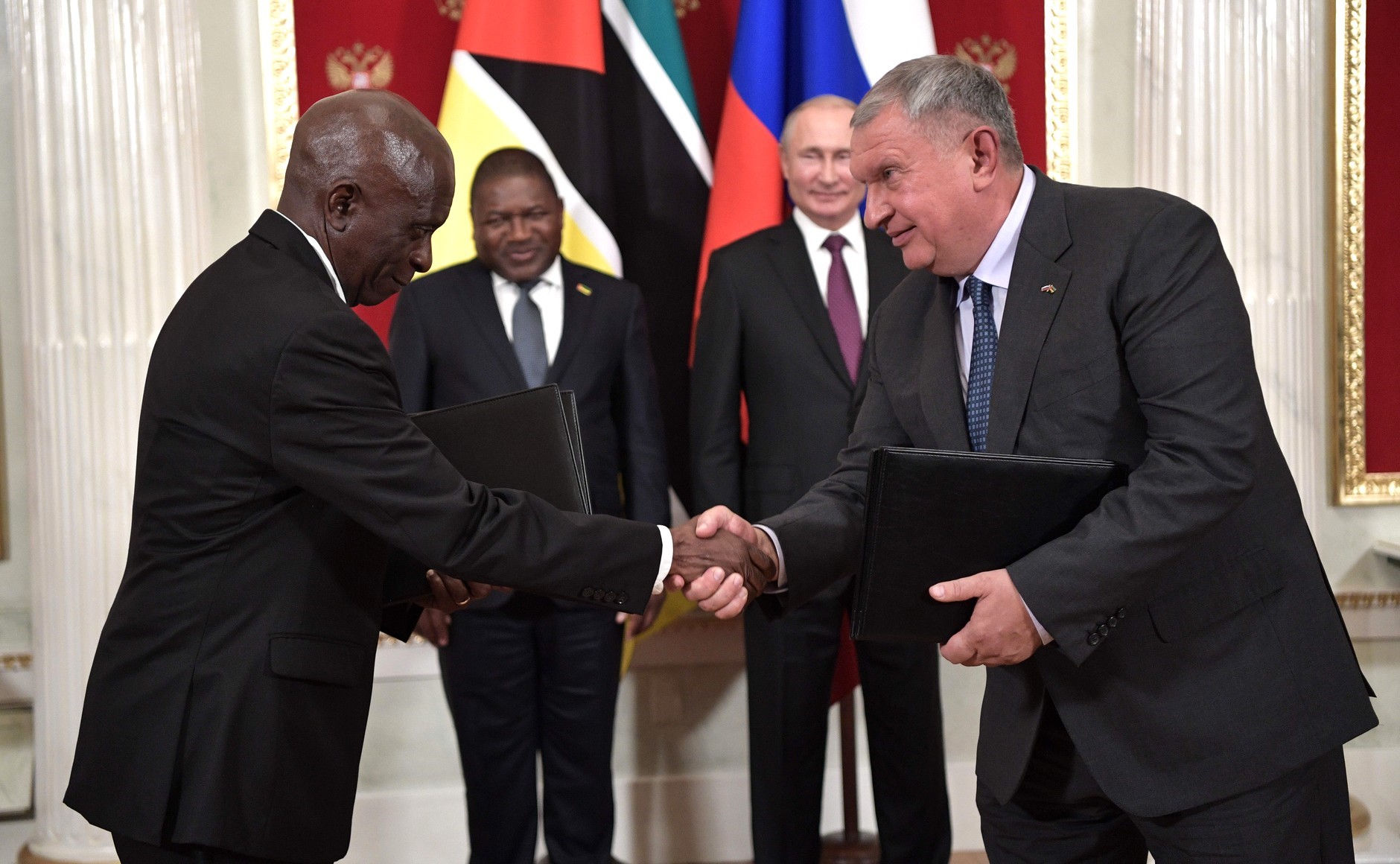 On August 22, President of Mozambique Filipe Nyusi was received in the Kremlin where he took part in the ceremony of exchanging copies of the agreements between Russia’s Rosneft and its Mozambican partners. Rosneft signed a memorandum with Mozambique’s National Hydrocarbons Company (Empresa Nacional de Hidrocarbonetos E.P., ENH) to develop offshore natural gas fields in Mozambique. Also, Sechin’s firm signed a cooperation agreement with Mozambique’s National Petroleum Institute (Instituto Nacional de Petróleo, INP). Under the signed documents, Rosneft will be granted the right to study available geological data to examine the potential of a number of Mozambique’s onshore and offshore blocks, with the opportunity to enter projects on those blocks in the future. “Mozambique is one of the perspective areas of Rosneft’s international business. We are keen on further expanding the project portfolio in the country.
I sincerely hope that the agreements signed today will contribute to that,” the firm’s CEO Igor Sechin said while attending the Kremlin meeting.

In late 2015, Rosneft’s subsidiary, RN-Exploration, and the ExxonMobil affiliate in Mozambique won an INP-held tender for the license to develop the three offshore blocks. The companies received permits for the blocks: A5-B in the Angoche River basin and Z5-C and Z5-D in the Zambezi delta.
In October 2018, a consortium of Rosneft and U.S.-based ExxonMobil signed concession contracts with the government of Mozambique for the exploration and production of hydrocarbons in three offshore blocks.
The firms have already launched geological works, expecting to make important gas discoveries. Besides Rosneft (20 percent) and ExxonMobil (50 percent), the consortium includes Mozambique ENH (20 percent) and Qatar Petroleum (10 percent).

Also, other large firms benefit from Moscow’s expansion in Africa. During the visit of the Congolese president to Moscow in late May this year, Lukoil signed a letter of intent with Congo’s state-run oil company SNPC. One of Russia’s biggest oil giants acquired interests in the Marine XII license offshore in the Republic of Congo for $800 million. This is how much Lukoil paid for buying a 25-percent stake in the hydrocarbon project operated by Italian oil and gas company Eni. This is Lukoil’s first energy project in the Republic of Congo yet another on African soil: the oil company so far has left its footprint in Cameroon, Nigeria, Ghana, and Egypt. The last of the four countries hosts onshore projects while the three remaining ones are where Russia develops its offshore ventures. Lukoil’s expansion in Africa is in line with the Kremlin’s active policy pursued on the continent. In addition to armaments deals, Russia is investing in the economy of other African countries, mainly through extracting minerals, or is tightening security cooperation. Moscow’s ever-growing appetite for Africa has manifested itself by Vladimir Putin’s meetings with local leaders and will be reflected by the Russia-Africa summit planned for October 2019.