In an interview with The Economist, French President Emmanuel Macron dealt a blow to NATO like any other Western leader has done over the last decade. Emmanuel Macron undermined U.S. leadership in the Alliance while raising questions about Article 5 of the NATO Treaty, the bloc’s fundamental principle. Since his August talks with Vladimir Putin, Emmanuel Macron has made his best efforts to dismantle the Western community. 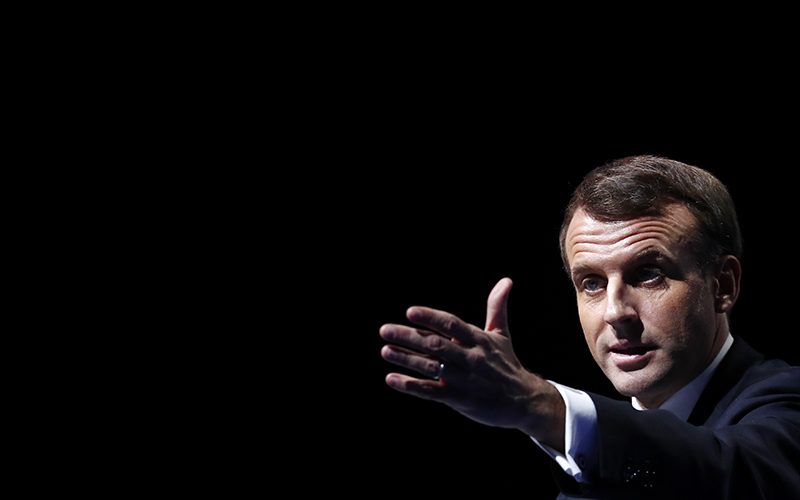 Champagne corks must have been popping at the Kremlin while reading Macron’s interview with The Economist. The French president has warned European countries that they can no longer rely on America to defend NATO allies. “What we are currently experiencing is the brain death of NATO,” Macron told the British weekly. Asked whether he still believed in the Article 5 of NATO’s founding Treaty, under which an attack against one member is considered an offense against all, Macron answered: “I don’t know.” Why has Macron hit a blow to the bloc? Because he seeks to fracture the Euro-Atlantic alliance in a bid to forge a new security architecture in Europe, seemingly based on the European Union, albeit under the aegis of Paris and Berlin, and in partnership with Moscow. Once brought to life, a similar arrangement would surge as an equal partner for talks, both with the United States and China. Yet this is nothing but a mere pipe dream because Europe cannot compete with the United States and the People’s Republic of China, either economically or militarily. Macron has made intentional efforts to decompose the transatlantic system of security that so far has brought more than 70 years of peace to the West.

Other major Western leaders have responded appropriately. Speaking with the Financial Times, Poland’s Prime Minister Mateusz Morawiecki has accused Emmanuel Macron of irresponsibility. “I hope that we can still count on France fulfilling its obligations,” Morawiecki told the magazine. In Morawiecki’s opinion, NATO’s problems were not caused by a stance adopted by Donald Trump, as insisted Macron, but the lack of commitment of some European members, most of whom — unlike Poland — still did not meet the alliance’s target of at least 2 percent of GDP on defense. France is such an example. When in Germany, U.S. Secretary of State Mike Pompeo underscored the Alliance’s importance while praising Berlin for being a great partner in solving worldwide conflicts. His words were mirrored by Germany’s Foreign Minister Heiko Maas, who put the assessment of Macron’s statement in question. Angela Merkel, the German chancellor, said that the transatlantic bond is vital for her country. “This view does not correspond to mine. President Macron chose drastic words. I don’t think that such sweeping judgements are necessary, even if we have problems and need to pull together,” Merkel said at the meeting with the chief of the transatlantic defense bloc. Jens Stoltenberg, in his turn, argued that the Alliance is strong, and any attempt to drift Europe apart from the United States poses a threat to the European Union.

Besides, Macron’s words are harmful to the bloc. And just like his outrageous statements about NATO, this is Moscow that is most pleased. “An exact definition of the current state of NATO,” Maria Zakharova, the spokeswoman of Russia’s Ministry of Foreign Affairs, commented on Macron’s interview. This is a gift for the Kremlin, yet another one that Macron has offered in recent months. A few weeks earlier, the French leader had vetoed the opening of accession negotiations with North Macedonia and Albania amidst the Kremlin’s aggressive push for rebuilding influence in the Balkans. The former country seems particularly vulnerable, with the risk of pro-Russian parties coming to power. Earlier, Macron had angered Bulgaria and Ukraine, saying that he preferred legal migrants from Africa to “clandestine networks of Bulgarians and Ukrainians.”

Emmanuel Macron is the first Western leader looking to bury the West’s post-Crimean policy toward Russia –– joint and somewhat agreeing in viewpoints. The French president aspires to “build a new architecture of trust and security in Europe” –– one that includes Moscow –– while urging the whole European Union to accept reset in relations with Russia, though Vladimir Putin has failed any of the conditions the West set five years ago. As early as in the spring of 2018, the French leader was reported to change his stance on Moscow. Despite a severe backlash in relations between the West and Russia that unfolded after the attempted murder of former Russian double agent Sergei Skripal, Macron attended the St. Petersburg International Economic Forum in May 2018. He later arrived in Moscow to watch the World Cup final in football. What might have exerted impact on the tilt in the president’s policy was intense pressure from a powerful pro-Russian lobby in Paris, not only business one –– there are over 500 French companies operating on the Russian market. Paris, as it was known, served a leading role in Russia’s return to the Council of Europe.

In August, Macron received Putin in his summer retreat of Fort Brégançon for talks –– referred to as an ultimate icebreaker in these two’s bilateral ties, the sign of a thaw in relations in the coming weeks. The French leader gushed that Russia was a “great nation of the Enlightenment,” adding that the country is home to liberalism, albeit on Moscow’s own terms. Putin and Macron spent later over two hours talking one-on-one. When they emerged from talks, both leaders said there would be no official statements, and any details remained a secret. Shortly after, at the G7 summit, Macron announced a new round of the so-called Normandy talks, while sometime later –– and for the first time in many years –– France and Germany held a joint meeting under a 2+2 formula, with foreign and defense ministers being present. Emmanuel Macron laid out how he viewed relations with Russia in the annual presidential address to the nation’s envoys at the Elysée Palace on August 27, arguing that these need to be observed while “pushing” this country further from Europe is “a serious mistake. “It is “vital to launch a new initiative” in mutual ties with Russia, Macron said, claiming that this could boil down to a reset policy in various conflicts.

Macron believes that he has assumed the position of European leader, making efforts to identify EU policy with Paris. This is a fatal vision for the Euro-Atlantic alliance, the bloc seen by many European countries, including Poland, as critically important. It is impossible not to distinguish France’s long-lasting aversion to the United States, critical in the context of Paris’s push for rapprochement with Russia –– as evidenced by stances adopted by Macron’s aides and France’s former socialist prime ministers. Hubert Védrine, France’s foreign minister between 1997 and 2002, blamed the “arrogant and haughty” West for sparking off the crisis with Russia. “It [the West] imposes its values to the rest of the world,” while “the Americans provoked the annexation of Crimea in their pursuit of NATO enlargement in Ukraine,” Védrine was quoted as saying. Jean-Pierre Chevènement, a former interior minister (1997–2000), spoke on Russia, claiming that “France cannot be hostage to U.S. diplomacy or Russia’s neighboring countries that show repugnance and horror toward Moscow.”

Author:
Grzegorz Kuczynski – graduated in history at the University of Bialystok and specialized Eastern studies at the University of Warsaw. He is an expert on eastern affairs. He worked as a journalist and analyst for many years. He is the author of many books and publications on the inside scoop of Russian politics.