France’s Macron and Germany Are Competing For Russia’s Favor

France seeks to replace Germany in the role of the top European participant in the Donbas peace talks. This is how recent events can be interpreted, with both a meeting between Macron and Putin and trilateral phone calls on Donbas held between French, Russian and Ukrainian leaders. In his bid to gain the most crucial position in Europe, Macron seeks to emerge as an author of a peaceful solution to the Russian-Ukrainian clash. The Kremlin seems to have nothing against, hoping that Macron’s decisive participation and Zelensky’s stance, eyed as much softer than that signaled by his predecessor, will altogether lead to bring about peace in Donbas, albeit on Russian terms. With both Poroshenko and Merkel in office, such an option remained impossible. Bringing a conflict in Ukraine’s east to a halt could facilitate Russia’s return to the G7 elite club after it had been kicked out over its annexation of Crimea. And this would make Europe take a step towards lifting sanctions on Russia. Macron has probably promised Putin that he will prove far more effective than Angela Merkel has even been. 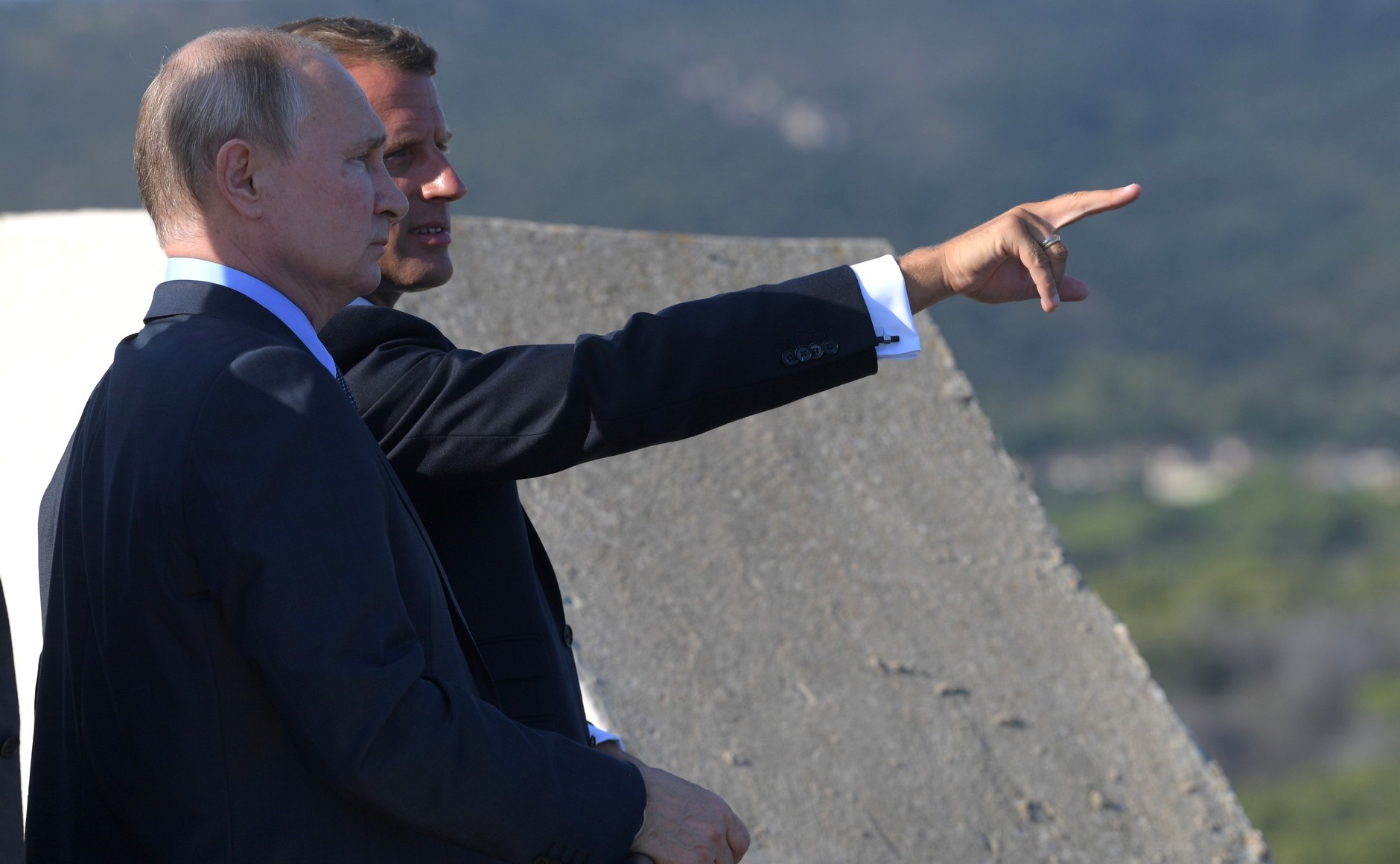 Macron received his Russian counterpart for talks in his summer retreat on August 19. The French leader said that he hoped his talks with Putin would lead to a summit on peace prospects in Ukraine in the coming weeks.
Macron confirmed his willingness to participate in celebrations in Moscow on the occasion of the 75th anniversary of victory over Nazi Germany in World War II to be held in May 2020.
But the two leaders gave priority to discussing the conflict in Ukraine. For its part, Putin voiced support for the Normandy format for negotiations aimed at putting an end to the war in Donbas. Not surprisingly, recent months have brought some changes to the format, making it much more advantageous for the Kremlin. First of all, Ukraine has now a new president who seems determined to bring about peace, possibly by making some concessions to Russia. In doing so, Macron may offer his help while Germany’s authority over the format is gradually relaxing.

France’s president took advantage of both Berlin’s problems at home and the aftermath of last May’s European elections to boost relations with the Kremlin. Macron’s goal may even consist in stripping Berlin off status of Moscow’s key European partner. Macron can promise Putin that he will be more effective and unscrupulous in rebuilding Russia’s relations with the EU and easing sanctions imposed so far.
Naturally, the French president has his own calculations, with his widely-known ambitions to emerge as a top European leader and an informal EU representative in talks with Russia, China, and the United States. Macron intends to go down in history as a politician who managed to overcome a major worldwide crisis and a leader capable of setting a new international deal, as exemplified by his words about the need to transform security architecture in Europe.

In this case, the interests of Macron and Putin seem to converge; the Russian president aims to put an end to Moscow’s isolation, also in relations with Europe. But it is also essential to keep in mind Russia’s strategic objective, which is to weaken ties in the Euro-Atlantic allies. The Kremlin can therefore deliberately shift the focus of European policy towards relations with France.
Germany may remain the leading economic partner, but the prospects for strengthening bilateral relations are no longer as rosy as they were a year ago.
While the Nord Stream energy pipeline project has encountered some obstacles, the political future in Berlin remains unclear, with the declining importance of both the Christian Democrats and the SPD party. Berlin has also failed to meet Moscow’s expectations regarding the Ukrainian problem, and Merkel has not put enough pressure on Kiev to implement the Minsk agreements. Alongside the defeat of Petro Poroshenko, German influence in Ukraine can be considered as weakening. Not incidentally, Zelensky spoke on the phone with Macron – and not with Merkel – as the fights in Donbas escalated, yet being aware of the Fort Bregançon meeting.