In the Kremlin, Venezuela’s Maduro Gets Russia’s Full Support

There is no question that Russia will neither reduce nor halt its support for Venezuela. Quite the contrary, in fact – the more sanctions are being introduced by the United States and the European Union, the stronger is Russia’s involvement in supporting Maduro’s regime. Russia’s state-run oil firm Rosneft is safeguarding the government in Caracas by trading its oil volumes, and Maduro’s recent visit in the Kremlin blatantly shows that Putin has no intention to abandon his ally. Interestingly, in addition to being Maduro’s most prominent diplomatic and military backer, Moscow is now offering its financial help. 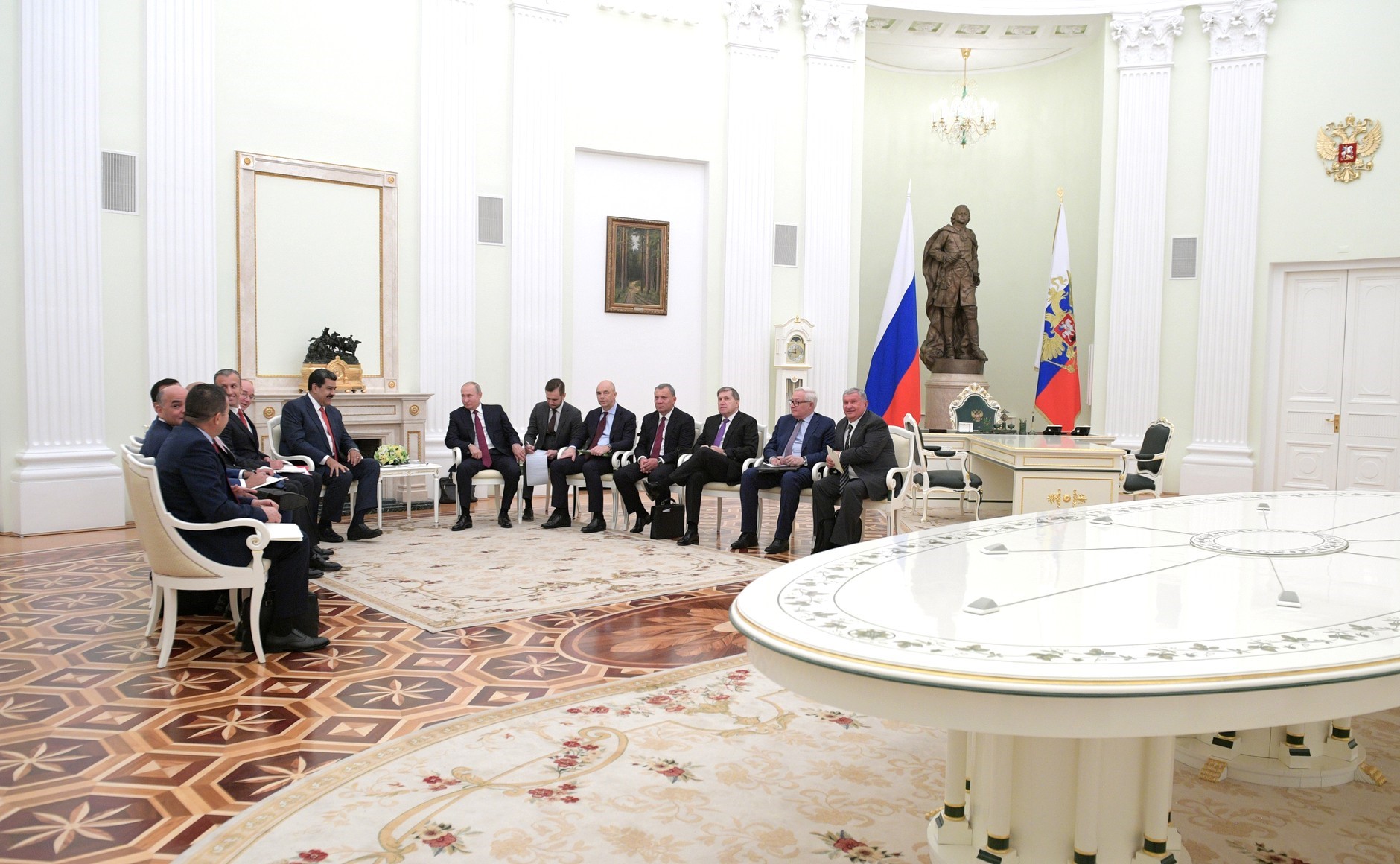 Maduro arrived in Moscow on September 24. The next day, he was personally received by Vladimir Putin in the Kremlin. Maduro headed to Russia shortly after U.S. President Donald Trump took on the regime in Venezuela during a speech at the United Nations General Assembly. In their opening remarks, neither Putin nor Maduro broached the topic of Russia’s financial aid for Venezuela. But, as the Russian leader said, his country has invested about $4 billion in the Latin American country. Russian President Vladimir Putin reiterated after the talks his support for “the legitimate authorities of Venezuela.” Maduro’s trip to Moscow confirms his willingness to maintain a tough political course in the country. In August, he suspended government’s participation in Norway-mediated talks with opposition’s representatives to protest Washington’s further tightening of sanctions. Six weeks later, Venezuela’s opposition said a dialogue had exhausted. As Maduro left for a state visit to Moscow, a group of Russian military specialists arrived in Venezuela. No details were revealed on how many of servicemen had been deployed. These may be troops dispatched to Venezuela to service military equipment Russia had sold to its Latin American ally.

Involved in the Moscow talks were Russia’s top officials: Deputy Prime Minister and Finance Minister Anton Siluanov, Deputy Prime Minister Yury Borisov, who oversees the domestic defense industry, Putin’s Foreign Policy Advisor Yuri Ushakov, Deputy Foreign Minister Sergey Ryabkov, and Rosneft CEO Igor Sechin. Maduro went to Russia chiefly to reap economic benefits or, at least in the worst-case scenario, to postpone debt repayment. The reason for the latter seems to explain why Siluanov was present at the meeting. And Igor Sechin’s participation in talks is far more obvious. First, Venezuela has an outstanding debt to Rosneft while the Russian oil giant is becoming more and more involved in trading Venezuelan-sourced crude. The Moscow meeting might have served as an opportunity to discuss further activities in this area. Last but not least, Venezuelan and Russian representatives may have discussed security cooperation, yet being far from asking for military assistance, because Maduro has at his disposal enough troops as well as police and secret service officers. Instead, Moscow-Caracas partnership in this respect could involve Russian services’ help for their Venezuelan counterparts, the latter of whom face prosecution for drug trafficking or torturing and persecuting opposition politicians.