At the beginning, the historic significance of the summit was explained by NATO’s Deputy Secretary General Mircea Geoana at the NATO Public Forum: “It is the most important summit for generations. Generations that never believed that after the atrocities after the First and Second World War that war is still possible in our continent. It shattered the assumptions in which our societies, our security, our economies were build.” 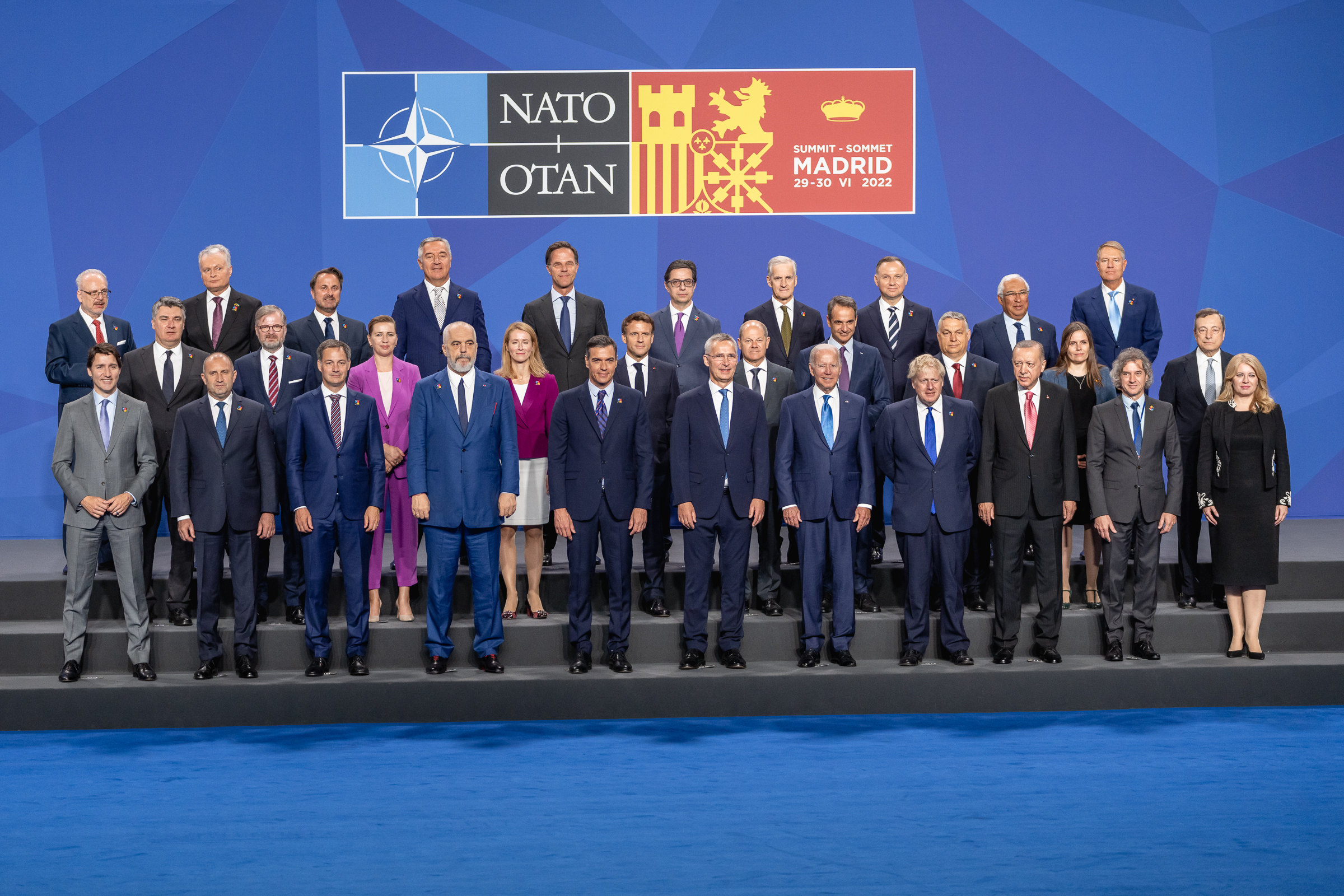 The newly adopted 2022 Strategic Concept calls Russia the “most significant and direct threat to Allies’ security and to peace and stability in the Euro-Atlantic area.” The People’s Republic of China, due to its stated ambitions and coercive policies, would challenge NATO’s interests, security and values. The Indo-Pacific is recognized as a region “important for NATO, given that developments in that region can directly affect Euro-Atlantic security.” Due to shared security interests NATO wants to strengthen cooperation with partners in the region.

Under NATO’s Core Tasks the Concept states to “defend every inch of Allied territory, preserve the sovereignty and territorial integrity of all Allies and prevail against any aggressor.”

Under bullet point 29 it stresses the importance of nuclear deterrence to be the “the supreme guarantee of the security of the Alliance.” Next to the United State’s arsenal it recognizes “the independent strategic nuclear forces of the United Kingdom and France (to) have a deterrent role of their own and contribute significantly to the overall security of the Alliance.”

Despite the reinforced focus on collective defence against Russia, the Concept devotes an entire section on Crisis Prevention and Management (points 35 – 39). It mentions the concept of ‘Human security’ as being central to it crisis management. Under the section ‘Purpose and Principles ‘it notes: “We will promote good governance and integrate climate change, human security and the Women, Peace, and Security agenda across all our tasks.” Climate Change is mentioned eleven times throughout the document. On a speech at the NATO Public Forum on Tuesday, a side event that was attended by some leaders, Secretary General Stoltenberg for the first time announced NATO’s goal to achieve zero net military emissions until 2050.

An Indo-Pacific and Global Dimension

For the first time in its history, the summit was attended by the Heads of State and Government from the four Indo-Pacific states Australia, New Zealand, Japan and South Korea. In his doorstep interview, Australia’s Prime Minister Anthony Albanese said he committed his country to participate in some NATO exercises later this year.[1]

At the NATO Public Forum, he expressed his concern about the “partnership without limits” between China and Russia, which was declared at the Olympic Games right before the invasion in Ukraine. For Australia the outcome of the war in Ukraine was very important as it would have implications for the Indo-Pacific region. There should be a message towards China that an attack on a sovereign state wouldn’t be just against this one state. Sitting next to him, the British Foreign Secretary Lizz Truss said there was a real risk that China could make the same miscalculations in Taiwan like Russia did in Ukraine. The free world had to work together to make sure that Taiwan was able to defend itself.

All in all, the critical evaluation of China in the Strategic Concept and the attendance of NATO’s Asian partners is a progress compared to the last NATO summit, when Angela Merkel said the relevance of China shouldn’t be overstated and when Emmanuel Macron said: “NATO is a North Atlantic organization, China has nothing to do with the North Atlantic.”[2]

Beyond that, the Foreign Ministers of Jordan and Mauritania, as well as the Defence Minister of Bosnia and Herzegovina attended the summit. In his final press conference Stoltenberg announced a defence package for Mauritania, support for Indonesia and the continuation of NATO’s training mission in Iraq.

In bullet point 19, the Madrid Summit Declaration affirms NATO’s commitment to the 2% goal in defence spending. The next year, decisions were to make on commitments beyond 2024. In a press conference statement on Wednesday, Jens Stoltenberg said two percent were seen “as a floor, not as a ceiling”. This reflects the statement of Boris Johnson at the G7-summit and Poland’s decision to increase defence spendings up to three percent of its GDP in 2023.[3]

In addition, NATO’s common funding is going to increase in the following years. Ahead of the summit on Monday, Stoltenberg said this should include investments in Command and Control structures, pre-positioned equipment, infrastructure and support for partners. The German “Frankfurter Allgemeine Zeitung” mentioned that 31 billion euros for the coming eight years until 2023 were discussed.[4] On Thursday, Stoltenberg said the final numbers were fixed in the coming consultations.

On several occasions, Secretary General Jens Stoltenberg announced the NATO Response Force (NRF) to be scaled up to 300,000 soldiers. The upgrade of the current battalion-sized battlegroups to brigade-sized battlegroups was confirmed. As supposed in the days ahead, there will be a rotation of the single components of the brigades, as Stoltenberg confirmed during the summit.

On Wednesday, Stoltenberg said that in the coming months he expects allies to fill the force structure with substance. According to Politico, officials from the UK estimate it could take until 2023 to work out the details. When Germany’s Minister of Defence Christine Lambrecht announced to contribute a division with 15.000 soldiers, 65 aircraft and 20 ships, she added this might take time until 2024.[6]

The United States so far announced to increase its presence in Europe with two additional F-35 squadrons in the UK, a headquarters of the Army’s V Corps in Poland, a rotational brigade in Romania and additional capabilities in Spain and Italy.[7]

Implications for the Eastern flank

In general, the summit’s results are going to strengthen the number of high-readiness forces in Europe and permanently forward-deployed troops in the eastern flank countries. The upgrade of the battalion-sized battlegroups to brigades will mean that 32,000 to 40,000 troops will be present or at least assigned to the eight Eastern flank countries. There is raised political awareness of Russia’s aggressive intentions.

However, there may occur some challenges to equip the 300,000 troops. For instance, as Germany currently contributes 16.34 percent to the NATO budget, this share would make contribution of around 50,000 (and not just 15,000) soldiers to the NRF, as Jürgen Wagner noted in his article for Heise.[8]

The summit’s results will probably not have met the expectations of the Estonian Prime Minister Kaja Kallas, who called for the deployment of a division in each Baltic republic ahead of the summit, according to the Financial Times.[9] The Estonian ERR news reported that there was an agreement with the United Kingdom to build a divisional level command structure in the country.[10]

Insecurity for the Baltics due to a limited permanent presence

The summit’s outcome indicates that the core of NATO’s contribution for the defence of the eastern flank allies will not be permanently forward deployed troops, but a quick-reaction force that might be deployed far behind the lines.

In a description of the NRF, a NATO article from June 23rd explains: “The VJTF and Initial Follow-on Forces [components of the NRF] are based in their home countries, but are able to deploy to wherever they are needed for exercises, crisis response or collective defence.” As a considerable part of the contribution for the NRF will come from western Europe and the United States, it can be assumed these troops will be far away from the eastern flank.

In comparison to a permanent forward-deployment of troops, an NRF-based defence implies more political and military insecurities.

To activate the NRF, a unanimous vote by the North Atlantic Council is necessary. As the readiness of the forces is ten to thirty days, this decision has to be taken sufficiently in advance of a Russian aggression. It requires every ally to take Russian military build-ups serious not to underestimate threats. This could become very urgent if Russia decided to hold its Zapad-exercises in Belarus with 200,000 troops like it did in 2021.

The preface of the Russian invasion in Ukraine has shown that important allies like Germany and France were not able to appropriately adjust their policies to Russia’s aggressive intentions. Germany hesitated to deliver arms to Ukraine, abandon North Stream 2 or meet the two percent goal not before the first Russian soldier actually crossed the Ukrainian border.

What makes it militarily more insecure, is the question whether the NATO Response Forces would actually be able to get to their assigned area on time: As Russia deployed a large amount of rockets and cruise missiles in Kaliningrad, it could deny or restrict access to the Baltic states via the Suwalki-Gap or the Baltic Sea in order to save time for Russian forces attacking from the Pskov and Leningrad Oblast.

The NRF-based arrangement leaves the Baltic states with less security than they would have got in case of permanently-deployed divisions. It would have also been beneficial for Poland and Romania, but as these two countries have more military capabilities of their own and a larger geographic depth they are less vulnerable than the Baltic states.

See the Secretary General’s press conferences among the summit: