On the initiative of the Warsaw Institute, representatives of over 20 non-governmental organizations from Europe and the United States issued a statement calling for the stoppage of the Nord Stream 2 gas pipeline project.

Nord Stream 2 is a dangerous and short-sighted project that puts the economic interests of several minority stakeholders ahead of long-term security in Europe and transatlantic relations. This unnecessary pipeline sows discord in Europe, strengthens Russia’s control of Europe’s energy supplies, and undermines collective efforts to counter Russian aggression in the region. 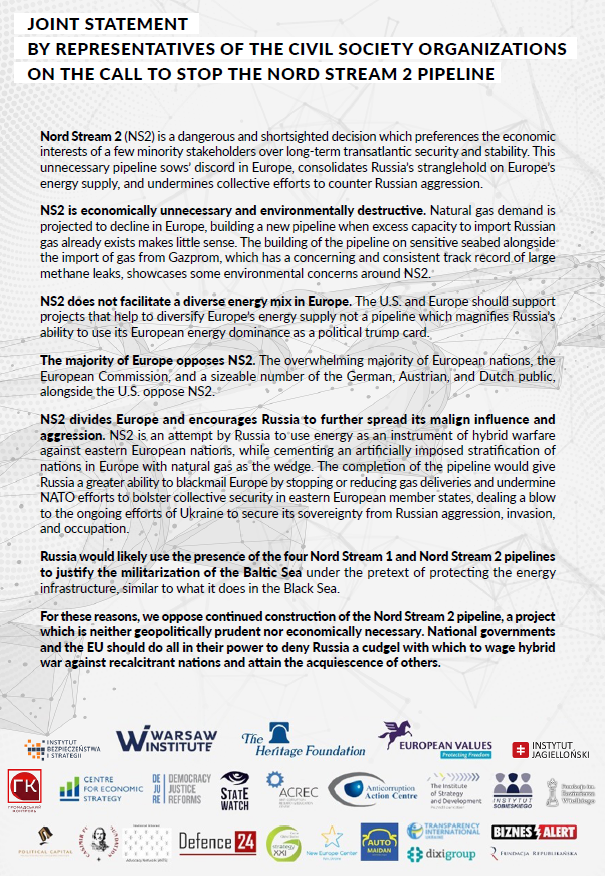 NS2 is economically unnecessary and environmentally destructive. Natural gas demand is projected to decline in Europe, building a new pipeline when excess capacity to import Russian gas already exists makes little sense. The building of the pipeline on sensitive seabed alongside the import of gas from Gazprom, which has a concerning and consistent track record of large methane leaks, showcases some environmental concerns around NS2.

NS2 does not facilitate a diverse energy mix in Europe. The U.S. and Europe should support projects that help to diversify Europe’s energy supply not a pipeline which magnifies Russia’s ability to use its European energy dominance as a political trump card.

NS2 divides Europe and encourages Russia to further spread its malign influence and aggression. NS2 is an attempt by Russia to use energy as an instrument of hybrid warfare against eastern European nations, while cementing an artificially imposed stratification of nations in Europe with natural gas as the wedge. The completion of the pipeline would give Russia a greater ability to blackmail Europe by stopping or reducing gas deliveries and undermine NATO efforts to bolster collective security in eastern European member states, dealing a blow to the ongoing efforts of Ukraine to secure its sovereignty from Russian aggression, invasion, and occupation.

Russia would likely use the presence of the four Nord Stream 1 and Nord Stream 2 pipelines to justify the militarization of the Baltic Sea under the pretext of protecting the energy infrastructure, similar to what it does in the Black Sea.

For these reasons, we oppose continued construction of the Nord Stream 2 pipeline, a project which is neither geopolitically prudent nor economically necessary. National governments and the EU should do all in their power to deny Russia a cudgel with which to wage hybrid war against recalcitrant nations and attain the acquiescence of others.