On September 29, 2021, Fumio Kishida won the vote for the leader of Japan’s ruling Liberal Democratic Party (LDP). He took office as the country’s Prime Minister on October 4. Chinese media note that he is known for a moderate stance, but during the election campaign he made accusations against China. Nevertheless, a change in Beijing’s foreign policy to an even more confrontational one should not be expected. 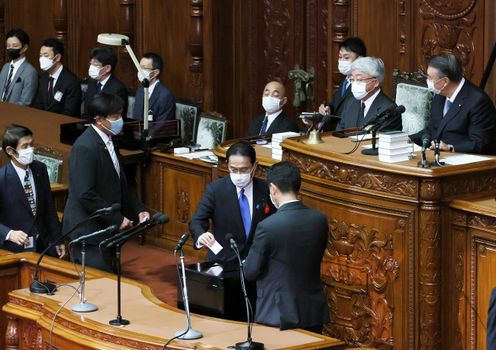 SOURCE: The Official Website of the Prime Minister of Japan and His Cabinet

Wang Guangtao, associate research fellow at the Center for Japanese Studies at the Fudan University, notes that the candidates adopted a hard line against China to please the voters during the election campaign. He states that even Kishida, whose policies are considered moderate, made attempts to be recognized as a tough politician by attacking China and using derogatory remarks against Beijing. According to Guangtao, this also reflects the deterioration of relations between China and Japan. In addition, the influence of the US, which is dragging Tokyo into the game against Beijing, cannot be marginalized[i].

In another article, the same author states that during Kishida’s term, the cooperation between Japan and the US in terms of military and security, among others, will be continued under the auspices of Quad. He notes that Kishida raised the issue of Taiwan during the presidential campaign, but did not mention that country in his conversation with Biden. This could imply that Taiwan would not be the core issue for him. The improvement of relations between Washington and Beijing may indicate a reluctance to further provoke the Chinese Communist Party (CCP). This will likely affect relations between China and Japan. According to Wang Guangtao, Japan’s new Prime Minister has not yet formulated a clear policy towards Beijing[ii].

On the other hand, the Global Times editorial board focuses, among others, on the newly created post of the special advisor to the Prime Minister on human rights issues, who would be dealing with human rights issues in China’s Xinjiang Autonomous Region and Hong Kong. The editorial board quotes Xiang Haoyu, a research fellow at the China Institute of International Studies, who notes that the establishment of the above position is intended to satisfy the needs of the anti-Chinese members of the ruling party. According to Xiang, Tokyo is likely to continue the alliance with the US, focus on deepening the Indo-Pacific strategy, and increase the defense budget[iii].

Moreover, Global Times journalists listed six issues that could significantly deteriorate relations between Tokyo and Beijing. First, the revision of Japan’s postwar constitution, which will legitimize the Self-Defense Forces (SDF), the possession of nuclear-powered submarines, as well as the construction of long-range strike capabilities that will significantly strengthen the Japanese military. Second, the Japanese involvement in a multilateral military alliance that will explicitly target China. Third, Japan’s SDF should not “blatantly provoke” Beijing as the US military does. Fourth, caution is encouraged regarding the Taiwan issue, suggests the Global Times. According to the newspaper, dispute in the Taiwan Strait could trigger a war with China. Fifth – past issues, such as visits to Yasukuni Shrine, the Diaoyu Islands (Senkaku Islands in Japanese), and textbooks. Tokyo should not use them as bargaining chips and create new conflicts. Sixth, the Japanese authorities should not cooperate with the US in the sphere of technological warfare, in which China would be the opponent. This could be treated as a “prominent sign that Tokyo sees Beijing as an enemy,” as the authors say. The article was summed up by a statement that extensive partnership between Japan and the US is a “deadly strategy for Japan.” Additionally, Chinese journalists hoped that Kishida will not lead to hostilities in relations between Japan and China since it is not in Tokyo’s interest[iv].

CCP Chairman Xi Jinping sent a congratulatory letter to Fumio Kishida on his election as Japan’s Prime Minister. There, he encouraged the development of good neighborly friendship and cooperation[v]. According to Chinese experts, “the new Japanese cabinet will not fundamentally change Japan’s foreign policy, especially when it comes to China.”[vi] Analysts believe that Kishida’s victory provides the Liberal Democratic Party (LDP) with a sense of continuity and shows the lasting influence of Shinzo Abe[vii].