Inauguration of Zelensky. Concessions in Donbas?

The winner of the presidential elections in Ukraine Volodymyr Zelensky was sworn in as head of state on May 20. He immediately announced the dissolution of the parliament and expressed his expectations of the government’s resignation and immediate personnel changes at the highest state offices. The matter of Donbas was a major part of his inauguration speech – peaceful resolution of the conflict was one of the main promises in Zelensky’s election campaign. 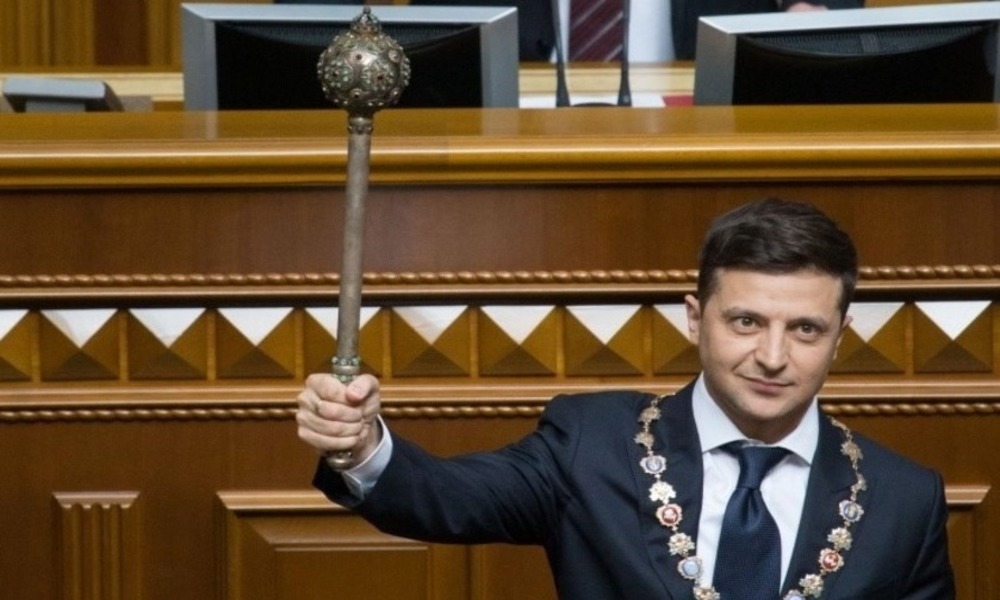 The new president declared that his first task would be ceasing fire in Donbas. “I am not afraid of making complicated decisions and I am ready to lose my popularity if it is necessary, I am ready to lose my office without hesitation to bring peace” – Zelensky assured. Such words may raise concerns. “Complicated” decisions which will not be well received by most Ukrainians may suggest concessions to Moscow. Against all appearances, Zelensky’s words that he does not agree on losing Ukrainian territories and he wants them back do not entail a firm approach of Kiev. It cannot be excluded that he means a plan which has been proposed by the Kremlin long ago. The plan entails a formal retrieval of the “people’s republics” under Kiev’s authority, but after the “elections” which would be won by Moscow’s nominees and granting immunity to the rebels (amnesty) and burdening the Ukrainian budget with social expenditures and costs of the reconstruction of the region destroyed by the war. Then, Zelensky would be able to announce that he realised his main promise: ended the bloodshed and regained the Ukrainian territory. The problem is that a real Russian control over Donbas and introduction of pro-Moscow politicians from Donbas at the central level would be the cost. Not mentioning the pro-Russian electorate in Donbas thanks to which pro-Moscow faction would become very strong in Kiev and may even influence the results of referendums about which Zelensky talked much calling them a tool of governance (e.g. referendum on NATO membership). “It is not us who started the war, but we have to end it. We are ready to talk” – Zelensky underlined switching – which is very meaningful – to the Russian language.

Moscow is open to negotiations about Donbas but it considers the issue of the Crimea as closed. In his inauguration speech, Zelensky called Donbas and the Crimea annexed by Russia in 2014 “Ukrainian territories”. The same day, spokesman of the Kremlin Dmitry Peskov called the Crimea “one of the regions of the Russian Federation” and said that the issue of affiliation of the peninsula “does not exist”. Zelensky talked little about the Crimea either in his campaign, or during the inauguration. At this point, one can consider whether by talking about unpopular decisions regarding relations with Moscow the new president meant some concessions concerning the Crimea – in exchange for gains in Donbas? It is known that Putin is not planning any talks with Zelensky in the nearest future. The Kremlin will be waiting for the Kiev’s move and will be using its people in Ukraine. The reaction of Russians to Zelensky’s words (in Russian) that “the first step to begin negotiations (with Russia – editorial note) will be the return of all Ukrainian captives to their homes” draws the attention. Peskov stated that Viktor Medvedchuk remained the mediator in this matter: “This is a person who has contact with Vladimir Putin and this contact will be continued in any case”. It is necessary to remember that during the campaign Zelensky severely criticised Poroshenko e.g. for allowing Medvedchuk, who is known of his pro-Moscow views, to negotiations with Russia. Now, it turns out that he will be forced to use Medvedchuk’s services himself. Moscow makes it clear that it does not exclude the dialogue but it has to be a dialogue on their conditions.