Kurt Volker, a representative of the State Department for Ukraine, in the Russian press called the inspector, visited Donbass. He was on the front line, where he announced that Russia should understand that this war is not worth it. When he finished his journey, German Chancellor Angela Merkel in Sochi began a conversation with the President of the Russian Federation Vladimir Putin, about Nord Stream-2, blue helmets in Donbass and Minsk agreements. The conclusion from these two events: peace in Ukraine is walking away. 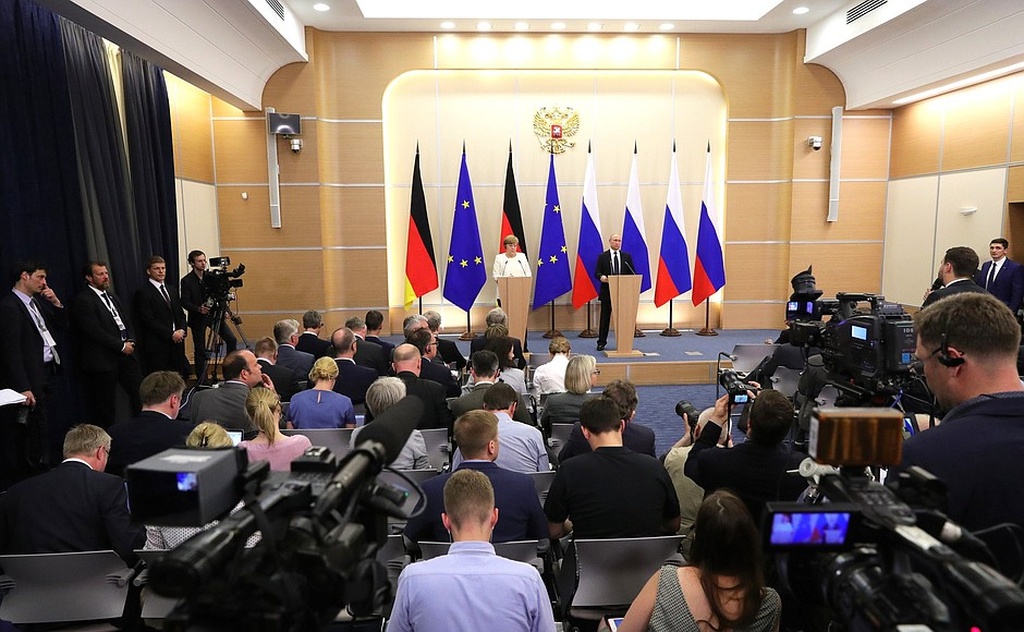 Kurt Volker hopes that the policy of sanctions against Russia, strengthening the Ukrainian army (including the sale of Javelin antitank missiles to Ukraine) and political support given to Kiev by the West will change the Kremlin’s policy towards Ukraine. The Russians, in Volker’s opinion, will not go further, but they will agree to introduce blue helmets to Donbass, including the Ukrainian-Russian border, which may be the first step to de-escalate the conflict and return of the territory occupied by Russia to Ukraine. According to Volker, Russia has lost its chance to regain political influence in Kyiv with its aggressive actions against Ukraine.

The pragmatic withdrawal of the Kremlin from the phase of aggression may create the foundation for a “new beginning” between independent states, Ukraine and Russia. Volker presented this logic and related political plan in January to Putin’s representative for Ukraine, Vladislav Surkov. The American package of proposals involves the deployment of UN troops in the south-eastern part of Ukraine with the implementation of the political part of the so-called Minsk provisions. There is, among others, mention of the elections in Donbas and the restoration of Kiev’s control over the currently uncontrolled part of the eastern border of the state. The first reactions of the Russian side were positive. Surkov even said that Volker has a good “balanced approach” to the problem. However, the January meeting turned out to be the last one, and there is no information about the next one. The Moscow press also speculated on the exchange of Surkov and Putin’s assignation of a new representative to negotiate with Volker.

There are many indications, that Surkov avoids Volker, because Russia has a completely different plan and just hit the good times for its implementation. Above all, Russia is not interested in pragmatic relations with Kiev and the “new beginning” if anything then only with the new Yanukovych. It is also counting on the pro-Russian party in Ukraine, whose influence has indeed weakened, but it can be quickly rebuilt: the history of Ukrainian-Russian relations knows such unexpected twists and turns. The goal of the Kremlin was and remains the vassalisation of Ukraine. The annexation of Crimea and its militarization, the war in Donbas, are the most serious means of pressure on Ukraine used by Kremlin.

In Sochi, Putin received a promise from Merkel to receive another lever of pressure on Ukraine, the Nord Stream-2 gas pipeline, which will eliminate the transit of Russian gas through Ukraine, it will make its entire gas transmission system useless and significantly reduce the influence of the already modest and indebted state budget. Nord Stream-2 can cause a political earthquake in Kiev, which is what Russia really counts on. The oligarchic gas lobby, with the prospect of losing several billion dollars, will surely stand against the President of Ukraine Poroshenko and will probably strengthen the Russian party, the chances for the emergence of a new Yanukovych will increase. On the day of the visit of Chancellor Merkel in Sochi, Poroshenko published an appeal to Merkel in the pages of the “Frankfurter Allgemeine Zeitung”, with whom he met in Berlin a few days earlier and once again presented his arguments to give up this project. In Sochi Putin was to assure Merkel that on market terms, if it is beneficial for Ukraine, transit will be continued. Both also agreed that Nord Stream-2 is an economic project, without any political context. Russia also very clearly opposed the deployment of “blue helmets” throughout the territory controlled by its mercenaries.

The consequences of Donald Trump’s decision of the US withdrawal from the Iranian deal turned out to be extremely beneficial for Russia. The Kremlin now has a much better economic situation to implement its policy in Ukraine, and also higher revenues from the sale of oil. A new government coalition in Italy opted for the abolition of sanctions imposed on Russia, similar voices are increasingly appearing in the Bundestag. Ukraine is left without the support of a united Europe, in the gas grip of Russia, with Russian mercenaries in Donbass and the annexed Crimea. A difficult attempt, not only for Ukrainians.