This article discusses the Military Organization Lizard Union (Organizacja Wojskowa Związek Jaszczurczy, OW ZJ) and the Musketeers (Muszkieterzy)––Poland’s World War II resistance movement that both fought Nazi Germany and the Soviet Union, albeit are little known to the public. This paper also recounts the biographies of two Polish female intelligence officers––Irena Iłłakowiczowa and Klementyna Mańkowska. The author attempted to depict varying ways to fight for freedom while not giving any hasty assessment. 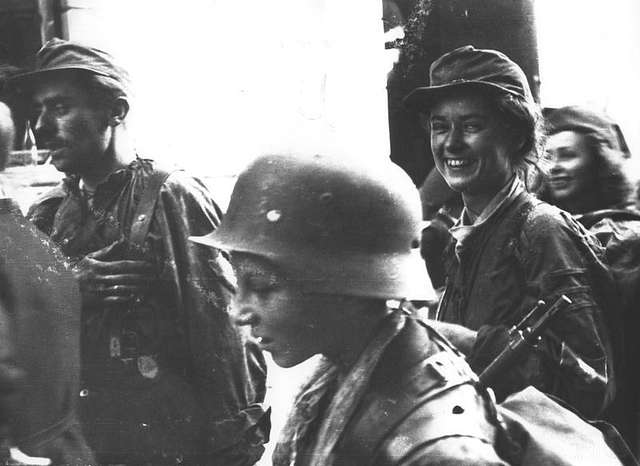 One example of a Polish resistance movement was the Military Organization Lizard Union (Organizacja Wojskowa Związek Jaszczurczy, OW ZJ). Founded in October 1939, it originated from the far-right ONR-ABC, a faction of the National Radical Camp. Its name referred to the Lizard Union, or a fourteen-century organization of Prussian nobles and knights established in Culmerland (Chełmno Land). Its declared goal was to combat lawlessness, although it allegedly sought the transfer of Culmerland from the Teutonic Order to Poland.

The OW ZJ was tasked with fighting to regain Poland’s independence. Its militants embarked on missions while selecting an array of romantic ideas materialized through pragmatic means. They imagined a reborn Polish state stretching from its 1939 territories in the east towards Polish Prussia, with the country’s western border based on the Oder-Neisse line. Many of its fighters believed in the renewal of moral Christian values. They remained under influence of Gilbert Keith Chesterton, a Christian philosopher and father of distributionism––an economic theory that despised both capitalism and socialism. Chesterton grounded his thinking into asserting that the world’s productive assets should be widely owned rather than concentrated. Having gone through the 1930s recession, his followers reprobated both authoritarian Sanation movements and the liberal democratic system.

Many groups––including those whose views varied––joined forces to defy Nazi Germany and the Soviet Union. Mieczysław Dukalski, the commander of the OW ZJ in Pomerania, told Poles to avoid being drafted into the military. Those already conscripted were deployed either to the eastern front to fight alongside Soviet forces or westwards, where they would desert and make contact with the Polish government-in-exile[1]. Many top OW ZJ officials––all of them very young when Poland came under occupation––abode by harsh conspiracy rules. How Poland would look politically was not a priority at the time of struggle against the two occupiers. Those who survived the war and settled in the West afterward sided with Western governments, hoping one day to see a democratic Poland. They never gave in Catholic faith in adult life, advocating for their liberated motherland. Most of them, however, died much before the fall of Communism.

The OW ZJ recognized the London-based government-in-exile. However, it refused to subordinate to the Union of Armed Struggle-Home Army and the Polish Underground State, claiming all three were on equal terms. Many Lizard Union fighters disproved the Sanation movement. One of its associates was Gen. Stanisław Bułak-Bałachowicz, the last military commander of the Belarusian National Army.

In 1942 some branches of the National Party and the military arm of the National Military Organization merged with a good many independence movements, including the National People’s Military Organization, Polish National-Syndicalist Camp, Order of the Rebirth of Poland, Armed National Emergency Service, Legion of the Union of Slavic Nations. Other clandestine military, propaganda, and intelligence outlets were also involved, among them Secret Polish Army, Military Organization “Wolves”, Polish Union Forces, Polish Armed Organization, Combat Organization East, and Armed Confederation[2]. A new civilian institution––referred to as the Provisional National Political Council (Tymczasowa Narodowa Rada Polityczna, TNRP)––was formed. It stood in stark opposition to the Political Consultative Committee. A leading member of the Council was Jerzy Olgierd Iłłakowicz.

The grouping developed its intelligence outlets to stage a nationwide uprising when the two occupiers became fed up with fighting against each other. The intelligence branch looked impressive and notched up a series of successes before eventually being captured by Nazi German services. Women got increasingly involved in intelligence work. A notable character was Irena Iłłakowicza, the wife of Jerzy Olgierd Iłłakowicz.

Irena Iłłakowiczowa – Giving Life in the Service of Poland

Irena Morzycka, Mora coat of arms, was born on July 26, 1906, in Berlin into a Polish land-owning family. Her ancestors settled in Kuyavia back in the sixteenth century. Her father, Bolesław Morzycki, was an engineer who helped construct railroads in Russia. While the Morzycki family stayed in Russia, the Bolshevik revolution broke out. In 1917 they moved to Finland, where Irena learned Finnish. After returning to the Second Polish Republic, which had regained independence in the aftermath of the First World War, she attended a school led by the Sisters of the Holy Heart of Jesus in Zbylitowska Góra. Many of the students hailed from the noble families of Czartoryski, Chłapowski, Czetwertyński, Dzieduszycki, or Stadnicki.

Afterward, she studied humanities at Grenoble University in France. Irena was fond of extreme sports––she was keen on alpine climbing. While climbing in the Swiss Alps, Irena saw a terrible accident, when a climber fell into a mountain precipice. In a sign of bravery, Irena recovered the body of the dead alpinist. She was awarded a golden Swiss mountaineering badge[4]. In France, she married Azis Zangenah, a Kurdish prince, with whom she settled in Persia. Two years later, she left secretly and went to Tehran. She traveled hundreds of kilometers by motorcycle, also through desert areas. Polish diplomats in Teheran made it possible for her to return to Poland.

After a period in Poland, she again went to Paris where she met Jerzy Olgierd Iłłakowicz. He graduated from agricultural studies at a university in Louvain, Belgium, and economic studies from a university in Lausanne, Switzerland. He was also a co-founder of the ONR ABC faction.  They married on October 23, 1934 in Warsaw upon their return from France. On June 25, 1936, their daughter, Ligia, was born. In October 1939 Iłłakowiczowa joined the Military Organization Lizard Union (OW ZJ), where she went by her aliases of “Irena” and “Barbara Zawisza”. A polyglot fluent in six languages (French, English, Persian, Finnish, German, and Russian), Irena started service as an intelligence officer in the elite intelligent unit “Z”.

Between 1941 and 1942, her section was destroyed by the Germans. The outcome of this action was the numerous arrests of underground activists. Irena was arrested by the Gestapo on October 7, 1942 and incarcerated in Pawiak prison in Warsaw. She underwent harsh interrogations but revealed nothing. Aware of her role in intelligence, her colleagues sent her a vial of cyanide, but she did not use it. An operation to free Irena was staged on January 16, 1943. A bribed guard put her in the group of non-political prisoners to be transported to the Majdanek camp, from where she was transported by a group of NSZ fighters in March 1943. Dressed in Gestapo uniforms, they came to the camp and presented a falsified document saying that Irena was to be brought to Warsaw for more interrogation.

A Home Army agent, who was also imprisoned in Pawiak, said Irena struck an anti-Communist deal with Nazi Germans. One version does not contradict the other that much. The National Armed Forces considered the Soviet Union and its allies the enemies of Poland.

Upon a short stay in a land estate and a visit to her parents in Klarysewo-Janówek, where her daughter lived, Irena made her way to Warsaw, where she started working on the Soviet intelligence network in Poland. Her husband was to be sent to London as the representative of TNRP (command of the National Armed Forces). He wanted to take her with him, but the command decided against it. Iłłakowiczowa was to be sent with Tadeusz Salski “Jan”. A few days before the trip, on October 4, 1943, Iłłakowicz was summoned to a meeting on an important issue. She suspected a provocation, but thinking it too important, went to the meeting. She asked Dr. Miłodorska, with whom she lived, to contact a specific person in case she did not return by 10 p.m.

Iłłakowiczowa was shot dead on October 4, 1943 on Polna Street near the Pole Mokotowskie park. Who murdered her remains unknown. In the days before her death, she was involved in intelligence activities against a radio contact point in Otwock, which actively supported Soviet parachutists sent to Poland. Perhaps there was a Soviet intelligence outlet in occupied Poland, according to a Ministry of Public Security note, drawn up after the war.

Iłłakowiczowa was buried at Powązki under the name of Barbara Zawisza. In 1948 her mother placed a plaque with Iłłakowiczowa’s real name on her grave. In 1995 she was posthumously decorated with the Krzyż Narodowego Czynu Zbrojnego (1-95-59).