A Greek Tragedy of the Warsaw Uprising

While discussing the Warsaw Uprising, we must think of both how heroic Warsaw insurgents and residents were at that time and that the city was razed to the ground. Its cultural legacy was destroyed while many people perished. Not only was the Warsaw Uprising a failed military effort, but it also stood for the biggest tragedy the Polish nation ever suffered. A particular feature now is the nationwide consciousness from which we all draw today. Poles have long tended to mark historical remembrance to honor national heroes, which is praiseworthy. And yet, all damages Warsaw sustained at that time were just gigantic. Józef Wiłkomirski, a Polish composer and Home Army soldier who fought in the uprising, recalled once that among those 200,000 people killed in the uprising was the flower of the Warsaw youth. These young people, he said, would have served a major role in rebuilding the war-ravaged country. 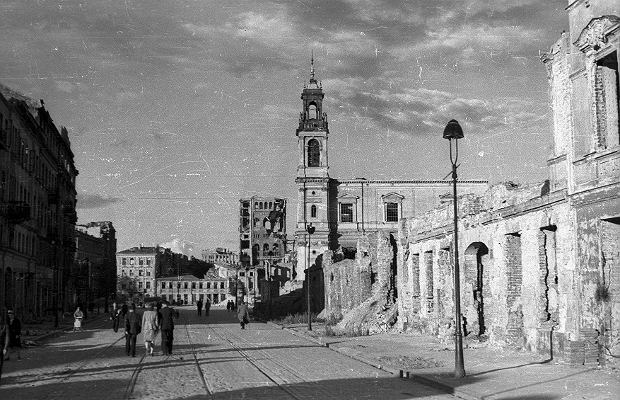 While contemplating the tragedy of the Warsaw Uprising, one should ponder what inspired the Home Army Command. As the Red Army approached Warsaw, the Polish underground staged an uprising against the Germans.

What prompted its members to take action was the situation worldwide. The Allies advanced from the west since June 1944, following the Normandy Invasion, while in the east, Soviet forces launched Operation Bagration, a codename for an offensive operation that enabled the Soviets to reach Warsaw outskirts on August 2. Indeed, there was mounting concern that the Kremlin would claim the Red Army had liberated Warsaw––without any help from the Home Army––while no underground state structure or resistance movement organization would be present in the Polish capital.

What happened in Warsaw also mattered considerably. On July 27, 1944, Governor of the Warsaw District within the General Government Ludwig Fischer ordered 100,000 Warsaw residents aged 17–65 to build fortifications at the Vistula River. As people in Warsaw refused, the ultimate punishment was death––with people being killed on the streets and in their houses. Three days later, Heinrich Himmler ordered 200,000 Poles to build fortifications. For Poles, it was better to be killed in the fighting. Professor Witold Kieżun, a Warsaw Uprising veteran, said the Polish capital was declared Feasting Warschau (“Fortress Warsaw”) as Nazi officers tried to establish a defense in the city against the advancing Soviet Union––as was the case in Minsk sometime before. Warsaw insurgents were perfectly aware of that. But unlike the Polish government-in-exile, they hesitated whether the Red Army or the Allies would help insurgents––albeit the former was just improbable, at least not to tip the scale for Warsaw insurgents. Despite growing Soviet propaganda––one example being Radio Moscow urging Poles to plot an uprising––the Home Army Command did not believe the Red Army could help anyway.

Those top Home Army officials in favor of the uprising were Col. Antoni Chruściel “Monter”, who commanded Polish forces in Warsaw, Gen. Tadeusz Pełczyński “Grzegorz”, Home Army’s chief of staff, and Gen. Leopold Okulicki “Kobra”, Home Army’s deputy chief of staff. The last of them endorsed the very idea of rebellion. Oddly enough, Okulicki was sent by Gen. Kazimierz Sosnkowski from London to Warsaw to prevent an uprising. His task was to inform Polish officials that the country was fighting a losing battle––and would fall into a Soviet clutch anyway. A conspiracy plot sought to save the nation and prevent bloodshed. Perhaps Gen. Sosnkowski sought to reduce the scope of uprisings within Operation Tempest to keep Home Army forces conspired before deploying them westwards, where they would anticipate World War III[1].

Janusz Bokszczanin, a colonel of the Polish Army and the deputy chief of the Home Army, strongly condemned the idea of an uprising. In July 1944 he attended uprising talks in the Home Army Command. As he later said, whether to stage an uprising was discussed since Okulicki had arrived in Warsaw. His words were echoed by Col. Antoni Chruściel “Monter” and Gen. Home Army Chief Commander Tadeusz Bór-Komorowski. The London-based government-in-exile washed hands of staging an uprising in Warsaw. Its officials argued only senior Home Army officers were eligible to decide as they reside in Warsaw and had the best understanding of what was happening in the capital.

According to Professor Paweł Wieczorkiewicz, in 1941 when in an NKVD prison, Leopold Okulicki might have agreed to collaborate with the Soviet Union after he had suffered torture. The question remains whether Okulicki continued to work closely with Soviet officials after being released upon the Sikorski-Mayski agreement[2]. Interestingly enough, Zdzisław Jeziorański aka “Jan Nowak”, a notable Polish resistance fighter and government envoy, gave a testimony alike. He met Gen. Okulicki as the uprising was nearing its end. He recalled himself being aghast at Okulicki’s untroubled stance. As a huge city was perishing in its ruins and the blood of its residents, Okulicki said “Warsaw will be knocked down in a few days,” while knocking on his knees as if the dust covering his pants meant as much as the city itself.

Gen. Władysław Anders––as he recalled later––was shocked by the outbreak of the Warsaw Uprising, believing it was the biggest misfortune at that time. He argued the uprising was doomed to failure, consigning Warsaw residents and the rest of Nazi-occupied Poland to harsh oppression. He did not believe Stalin would help the war-torn city.

Whatever we think of the Warsaw Uprising, it was indeed a Greek tragedy, with any decision considered fatal at that time. Despite that, the memory of the uprising consolidates national spirits and thus freedom and independence. Both the Warsaw Uprising and World War II impacted the way we perceive the world. An independence-building effort is a constant challenge–– an Eastern-wide challenge that Ukraine must face now. We Poles tackle this challenge every day––not in a fight, but through our history, a sense of solidarity, and responsibility for the common future.

As some debate on whether it was reasonable to start an uprising, the sacrifice that the Warsaw insurgents had made is undoubtedly one of the most heroic chapters in Polish history.

[2]Notwithstanding that, in 1945 Okulicki was arrested again by the NKVD. He was sentenced in the staged Trial of Sixteen. In 1946 he died in mysterious circumstances in a Soviet prison.