“The Future of European Integration” and “Digitization in the European Union” were two events in the framework of the Conference on the Future of Europe, which is an opportunity for European citizens to debate on the bloc’s challenges and priorities. The event was held jointly by the Wacław Felczak Institute of Polish-Hungarian Cooperation and the Sobieski Institute while the Warsaw Institute provided media support. The online debate was attended by experts from Hungary, the Czech Republic, Slovakia, and Poland. The working language was English. 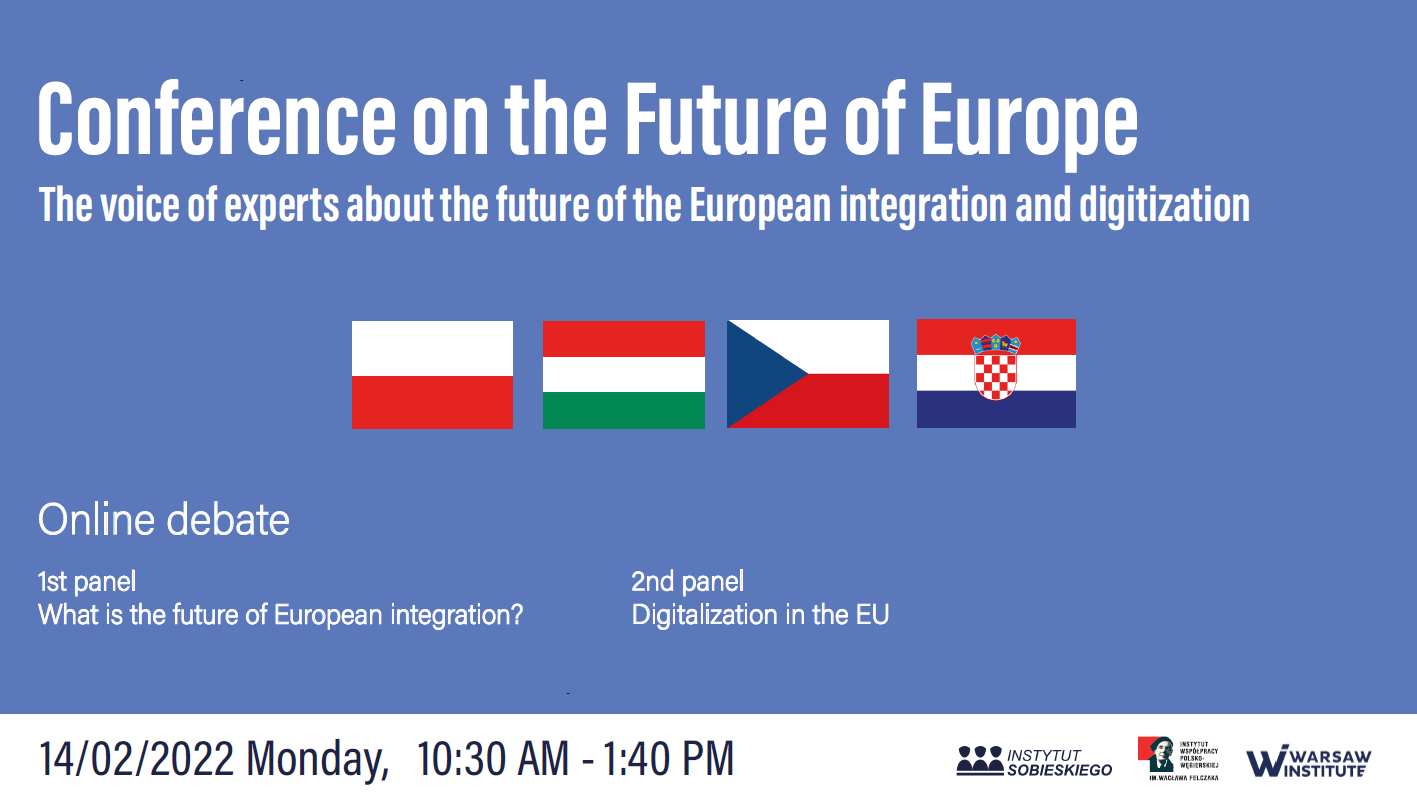 Introductory remarks were delivered by Patryk Błaszczak, a diplomat at the Polish foreign ministry and the state coordinator for the Visegrad Group. Mr. Błaszczak said the very idea of the Conference on the Future of Europe was close to both the Polish government and the Visegrad Group, or V4, itself. While outlining the perspective for V4, Mr. Błaszczak insisted on increased cooperation between its member nations and discussed the outcomes of Poland’s V4 presidency.

“Indeed, a set of tasks that V4 is now faced with mirrors those of the European Union. Here I mean some measures to fight the Covid-19 pandemic that helped us exchange data and tighten cooperation between the four Visegrad nations. As a response to the outbreak, V4 launched a scheme to support people in the Eastern Partnership countries affected by the pandemic,” he added.

Mr. Błaszczak said the Visegrad nations had adopted a common stance on EU migration policy, ties with the Balkans and the U.S., or on agricultural policy. The official drew the audience’s attention to an ever-growing role of V4 towards its nations, adding the bloc was spending more on research and development.

Those who then took the floor were Gáspár Keresztes and Łukasz Warzecha, who started a discussion panel on the future of the EU and the push towards European federalism. The participants included Jan Machacek, the president of the Institute of the Politics and Society, Prague, Tomasz Grzegorz Grosse (Sobieski Institute), and Peter Stepper (Hungarian Institute for Foreign Affairs and Trade). On the agenda were issues pertaining to the core of federalization and whether it could be the desired direction for the bloc alongside its consequence for smaller and bigger member nations or the effects on the EU’s decision-making processes.

“With my expertise in European studies, I deem two components of this thesis most appropriate. First and foremost, federalization is often seen as an effort to gravitate towards centralized competencies, which takes place between member nations, while European institutions are shouldered with the powers of nation states. It is the first controversial issue in the process of power centralization in the European Union (…) it is vital whether EU institution do not restrict democratic communities in some EU states,” Professor Grosse said in a speech.

In response, Peter Stepper said it was not necessary to push the EU towards federalism while the bloc needed a raft of reforms to increase its stability and competitiveness. For his part, Jan Machacek said the idea of federalism indeed covered the process of centralization whose rules significantly differed from the federal ones. There is no EU-wide legislative chamber to represent all countries, with the same number of votes as in the United States. Large EU nations have more votes in the Council of the European Union than their smaller peers, which is contrary to the idea of democratic federation. So the EU’s drive towards “federalism,” or through centralized competencies, makes the bloc’s biggest countries most powerful.

Subsequent questions raised the issue of scrutiny of the rule of law, proceedings concerning the rule of law, and whether these principles indeed apply to the EU institutions. Mr. Machacek said any action taken within the EU should be subject to the rule of law, also through judicial control. Professor Grosse then added:

“I think the major problem is that EU institutions keep pushing for more powers, also by circumventing or amending the treaties.”

So according to Professor Grosse:

“The rule of law should also apply to EU institutions. They have no power to amend the treaties as only member nations are in power to do so by unanimous consent. And neither the Court of Justice of the EU nor the European Commissioner has such powers.”

The second part of the conference tackled the digitization of the European Union. The panel was attended by Aleksandra Rybińska, a columnist for the weekly Sieci and moderator for the discussion, Marton Ugrodsy (Hungarian Institute for Foreign Affairs and Trade), Martin Reguli (F.A. Hayek Foundation), and Piotr Hańczyc (Sobieski Institute). On the agenda were issues such as the EU digital market and the role of the biggest U.S. digital firms or France’s presidency of the Council of the European Union and the state’s digital agenda. The matter of European digital giants has also been raised.

“The most important thing is a distinct approach to strategic autonomy that everybody grasps differently. Consumers have their rights protected while using digital services throughout the EU. I mean here the right to be forgotten: the GDPR gives individuals the right to ask organizations to delete their personal data. It is clear individual rights require better protection.”

Speaking of European digital firms, Mr. Maca was pessimistic about creating such tech corporations. Asked about Central Europe’s competitiveness in the field of artificial intelligence, Mr. Reguli said countries like Slovakia are affected by brain drain, or the international transfer of human capital resources, and thus need to welcome immigrants from elsewhere. Finally, Ms. Rybińska broached the topic of regulating U.S. digital platforms and asked whether the EU and the U.S. could team up to provide a legal framework for monopoly. Mr. Reguli noted that the two would first need to establish common rules for the digital economy that they now lack. Mr. Ugrosdy, for his part, said state governments operated far slower than the market and firms were the fastest to react.