Vladimir Putin’s address at the Federal Security Service Board meeting confirmed the regime’s eagerness to further sharpen its domestic policy. The president praised Russia’s counterintelligence officers for its effectiveness, warning against antagonistic activities from the outside. Particular attention should be drawn to Putin’s words about a growing number of foreign cyberattacks, which are a blatant example of his response to the West’s renewed accusations of Russian activity in cyberspace. Vladimir Putin dedicated a part of his speech to the need to counteract corrupt practices, giving a hint that one of the FSB’s priorities will still consist of executing the Kremlin’s orders to destroy Russian politicians and businessmen. Lubyanka is set to remain a key tool for Putin, allowing him to continue his “divide and rule” strategy that is gaining momentum in the context of the tense economic situation and the regime’s dropping popularity. 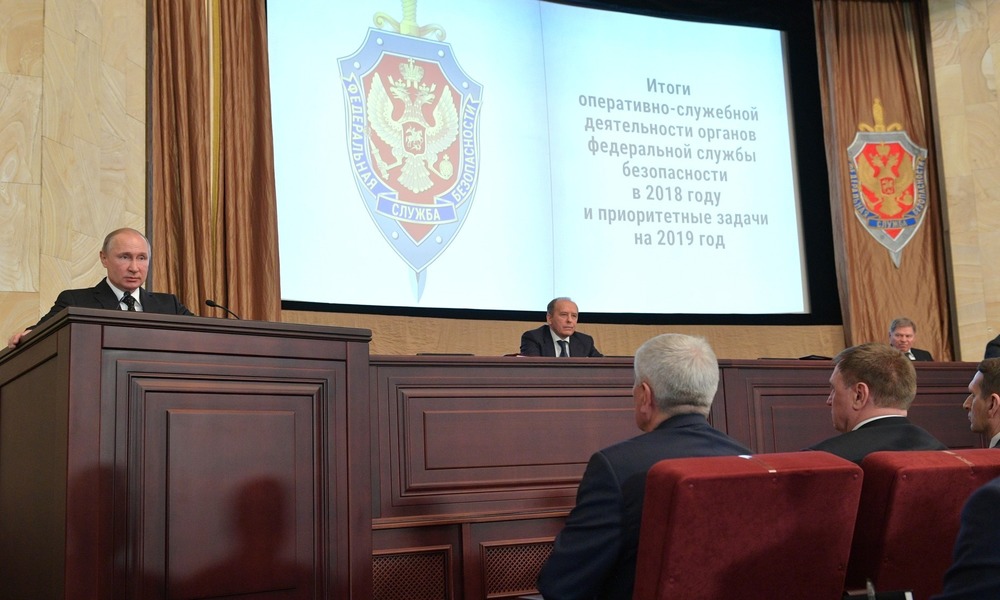 The annual Board meeting of the Federal Security Service (FSB) took place only a week after the Interior Ministry conference, at which President Vladimir Putin urged his trusted “siloviki” to reinforce measures aimed at easing social discontent. Addressing the senior FSB staff at the conference on March 6, Putin put emphasis on different aspects, drawing attention to Russia as a “besieged fortress”. Putin naturally referred to Russian siege by hostile foreign forces but in fact, the nub lies in the current regime. Also, the Russian leader admitted that foreign intelligence services strived to access classified data yet Russian counterintelligence performed both “efficiently and aggressively” last year. The FSB would conduct successful special operations to cut short the activities of 129 career officers and 465 agents of foreign intelligence services, the president said. He also stressed that the activities of the latter have recently intensified and mentioned the issue of “expanded NATO infrastructure in close proximity to the Russian border” as a challenge and threat to the state security. Not incidentally, these words came from Putin at the FSB meeting, and not that of “traditional” intelligence services, which may give a signal to develop their foreign operations beyond the zone of the former Soviet Union. The FSB, which so far has considered also Estonia, Latvia and Lithuania as the “near abroad”, could now be able to operate in Poland and Romania. A day after his address delivered at the FSB Board Meeting, Putin broached the topic of “the increasing concentration of foreign spying and military activities in close proximity to Russia’s borders” at the Security Council meeting, thus stressing its profound importance for the Kremlin

In a speech to the FSB top officers, Putin also insisted to “take more proactive measures against corruption” to intimidate external investors in Russia, as illustrated by the February arrest of Michael Calvey, American founder of private equity fund Baring Vostok that has operated in Russia since the 1990s.