Completion of Nord Stream 2 will likely result in too much economic and political influence of the Russian Federation on Europe, especially the CEE, according to former US intelligence chief and US ambassador to Germany Richard Grenell in an interview for the Warsaw Institute think-tank. The event took place on June 23, 2021 and was organized by the Warsaw Institute think-tank within our Diplomacy Talks Series.

KEY TAKEAWAYS BY AMB. GRENELL:
• United States are aware of and worried about the negative aspects of German policy, especially given its significant role in the NATO Alliance.
• Germany often doesn’t provide an example of allied integrity – both in terms of contribution to the development of defence capabilities (given their contribution below 2% of GDP), bilateral partnerships, and the Nord Stream 2 pipeline. Their actions are harming the energy security of Ukraine and NATO members.
• While Nord Stream 1, was needed in the European diversification mix, Nord Stream 2 generates too much influence of the Russian Federation on the Central and Eastern Europe.
• As far as energy security is concerned, one cannot be guided by emotions, but by science and calculations, hence German actions aimed at excluding an atom from the energy mix seem illogical.
• The German government and their policy in recent years have posed serious threats to the durability of the North Atlantic Alliance. Angela Merkel’s political agenda, unfavorable for NATO cohesion, is likely to continue after the upcoming September elections. 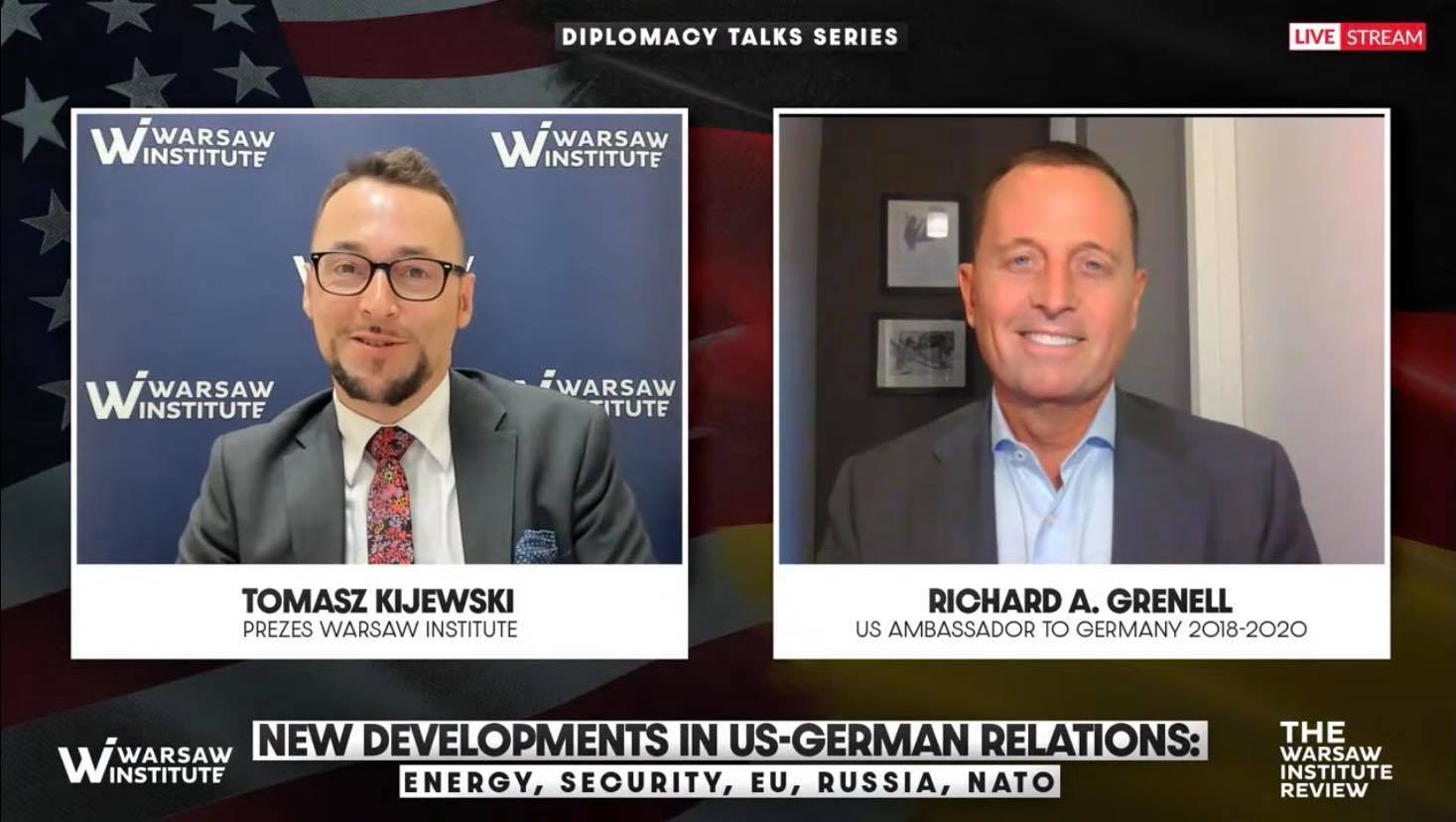 SUMMARY OF THE EVENT:
The first question asked to Amb. Grenell concerned the issue of whether Joe Biden’s administration’s approach towards Nord Stream 2 were reasoned, allowing the Russians to complete the pipeline. The guest replied that while Nord Stream 1 was the right answer to the required energy diversification in Europe, Nord Stream 2 has no justification and there is a risk of too much influence of the Russian Federation on Europe and the CEE. Moreover, the stoppage of construction of Nord Stream 2 should be a priority for the North Atlantic Alliance as a collective, including Germany. The Ambassador considers it surprising that the German authorities underestimate such a large extension of Russian influence over Germany and Europe. In the US, negative aspects of Germany’s policy are noticed, which are an important member of NATO but often do not provide an example of allied integrity – both in terms of membership fees (meaning less than 2% of GDP), contribution to the development of defence capabilities, its bilateral partnerships, and the discussed gas pipeline damaging energy security of NATO countries and Ukraine.

The next question was related to regional security taking into account German actions. Richard Grenell pointed to the incoherent policy of Germany. On the one hand, they consider themselves an important NATO member, but on the other hand, they identify threats differently than, inter alia, United States. Chinese or Russian influence is not as problematic and destabilizing for the German government as it is for the US. According to the guest, the German government and its policy are generating threats to the image and durability of the Alliance. Bearing in mind the long history of US-German cooperation, Mr. Grenell hopes that Germany will soon decide to debate the problem of directing its foreign policy to one that does not harm NATO’s interests.

Another of the issues raised was the continuity of German policy, despite the changing governments. According to Ambassador Grenell, there is a high probability that Angela Merkel’s government’s policy, unfavorable to NATO, will continue after the upcoming September elections. From the statements of politicians, it can be concluded that actions detrimental to the structure and goals of the Alliance will continue to dominate.

Later in the conversation, the president of the Warsaw Institute, Tomasz Kijewski, mentioned the problem of perceiving the reformist intentions of former US President Donald J. Trump. Richard A. Grenell explained that the majority of the public was influenced by often false media reports. The 45th US president did not focus on policy continuity, but on real results, hence, inter alia, pressure on the states gathered in the Alliance to pay specific amounts for their defence capabilities, i.e. min. 2% of national GDP. According to the guest of the Diplomacy Talks Series, the policy of influencing the Alliance countries presented by the previous US president was much more effective than that of Barack Obama or Joe Biden.

The President of the Warsaw Institute, Tomasz Kijewski, asked R. Grenell also about US-German business ties and trade relations. In response, the Ambassador pointed out that the business and commercial intimacy is very high, such German companies as Lufthansa and Bayer employ thousands of Americans. The data indicate huge German investments in the USA, several times higher than American investments in Germany. The result of these investments is approximately 900,000 jobs created by German companies in the United States.
One of the last threads of the conversation was Joe Biden’s perception of the economic and political initiative of the Three Seas Initiative. According to the guest of the Warsaw Institute, there is cross-party support in the USA for this initiative and it will be very much supported.

The talks also focused on US-German cooperation in the field of international security, including nuclear security. According to the former US Ambassador to Germany, the currently functioning assumptions and tasks are carried out effectively and he does not feel the need to change them.

At the end of the meeting, the issue of US energy security was discussed. Richard A. Grenell discussed the evolution of the US energy economy, the transition from an importer to a major exporter of energy resources such as natural gas (LNG). According to the American politician, when it comes to energy issues, one cannot be guided by emotions, but by science and calculations, hence German actions aimed at excluding nuclear power from the energy mix seem illogical.

Mr. Grenell is a U.S. diplomat, political advisor and media consultant who served as National Director of Intelligence and U.S. Ambassador to Germany from 2018-2020. Since 2019, he has also been the president’s special envoy for peace negotiations in Serbia and Kosovo. Mr. Grenell has expressed an interest in running for governors for 2021 in California. In 2001, Mr. Grenell was appointed Director of Communications and Public Diplomacy of the United States Permanent Representative to the United Nations in New York. In that capacity until 2008, he advised four different US ambassadors. During his tenure, Grenell announced the official US position and strategy on issues such as the war on terrorism, global peace operations, nuclear proliferation and the UN scandal over the corruption of oil for food. He holds an MA in Public Administration from Harvard University at the John F. Kennedy School of Government.

Tomasz Kijewski graduated from international relations at the University of Łódź (scholarship at the Center for Transatlantic Studies in Maastricht, the Netherlands) and post-graduate studies at the Academy of Martial Arts in Warsaw. Graduate of incl. National Security Study Program (PASS) at the European Center for Security Studies General Marshall (Garmisch-Partenkirchen / Washington DC). He completed a course at the International Energy Agency (Paris) and was an energy advisor in Calgary. Performing diplomatic duties, for many years he was active for Poland and the Polish diaspora in North America. Areas of interest: new forms of international conflicts (hybrid war, asymmetric conflicts), counteracting terrorism, energy security. Prepares a doctoral dissertation.

Warsaw Institute is a geopolitical think tank in Poland. The main areas of our interest are international relations, energy security, defence, disinformation, and any other issues crucial for Poland and East-Central Europe. We are proudly supporting the Three Seas Initiative and transatlantic relations. Warsaw Institute develops and provides innovative and practical recommendations based on the wide experience of its experts (over 40 cooperating experts). Warsaw Institute helps to improve public policy and decision-making through research and analysis. Our activities are dedicated to government organizations and agencies as well as non-governmental organizations, think tanks, research institutes, academic communities, opinion-forming media, and experts. Warsaw Institute is an independent, non-profit, nonpartisan organization supported by contributions from individuals.