Event Summary: Piłsudski, Dmowski, and Paderewski – the Fathers of Polish Independence and Their Vision of the Country

On June 29, 2021, a debate took place and included the following participants: Jan Wiśniewski, PhD – coordinator of the Regional Centre for International Debate in Toruń, lecturer at the College of Social and Media Culture in Toruń; Karol Wołek – chairman of the Kazimierz Wielki Foundation, the Kazimierz Wielki Association, the Main Board of the Union of Soldiers of National Armed Forces, and the Amor Patriae Foundation; as well as Jakub Lachert – expert of the Warsaw Institute. The debate was moderated by Tomasz Kijewski – president of the Warsaw Institute. 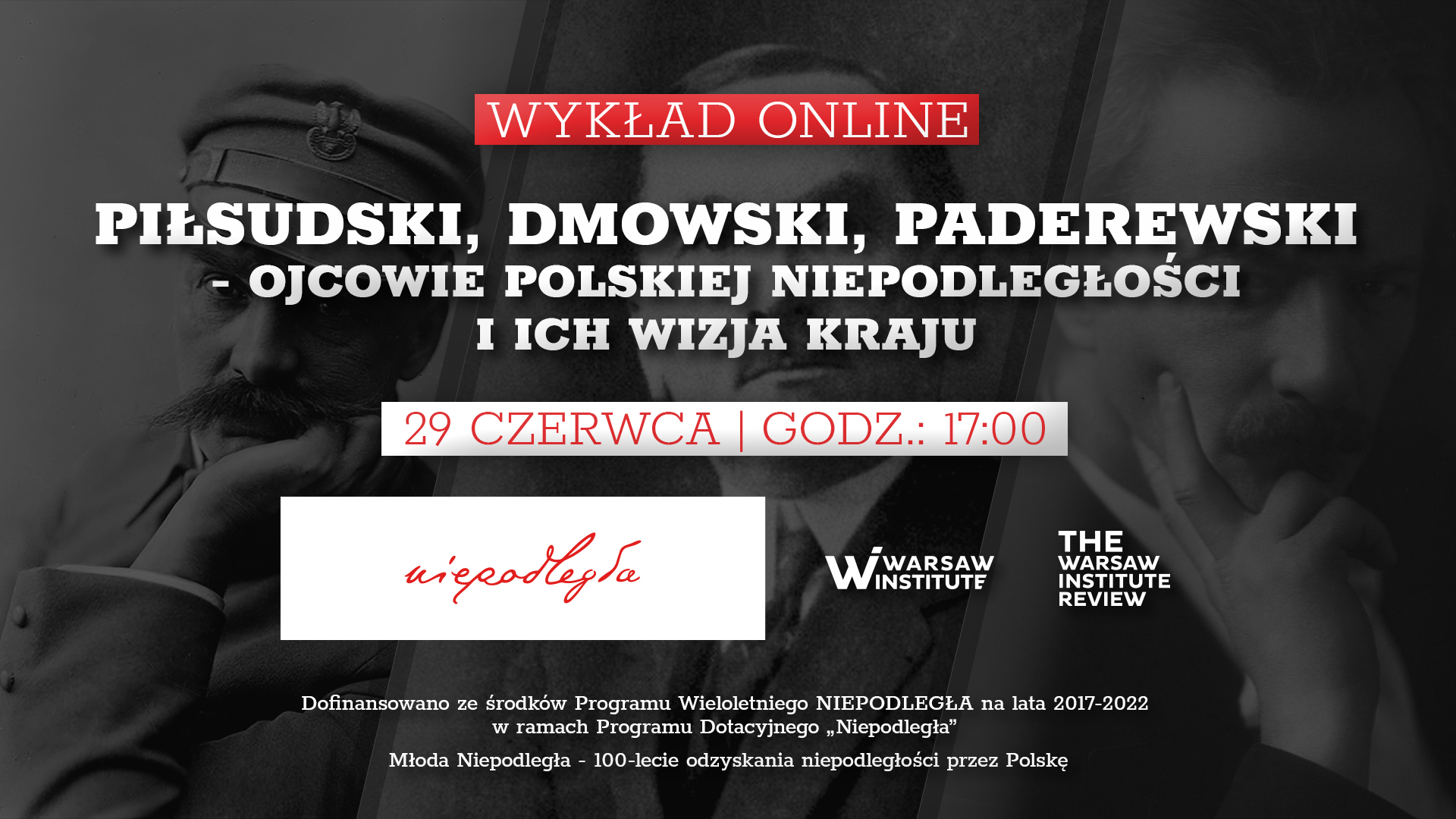 The debate consisted of two parts: the first one aimed to outline the profiles of the fathers of independent Poland and the foundations of the ideologies that guided them in their political activities. The second part was an attempt to confront the significance of these figures for the Second Polish Republic and the main assumptions of the political thought of that period.

In the first part, Dr. Jan Wiśniewski characterized Józef Piłsudski, starting from his early years when the future Commander of the Polish Army was sent to exile in Siberia and his accidental underground activity. Pilsudski’s major challenge was to combine socialist ideology with the idea of an independent Poland. The two notions were often contradictory. Dr. Wiśniewski stressed that Piłsudski’s pro-independence views were formed only after the 1905 revolution. Piłsudski was a politician and military man who, although had no formal military training, reached top posts in the Polish army. However, his decisions in the 1930s led to the disorganization of the army, which resulted from the lack of formal experience.

The second speaker, Mr. Karol Wołek, characterized Roman Dmowski as the main ideologist, diplomat, and politician of the interwar period. As the leader of the National Democracy, founded in the early 20th century, Dmowski tried to act in all three partitioned territories. Dmowski characterized the nation as a cultural community which was the starting point for setting new political goals without creating any dogmas in this matter. A factor that was vital for building the Polish nation was the establishment of national boundaries to maintain the Polish statehood. To this end, it was crucial to repel Germany, which, according to Dmowski, was the main threat to Poland’s cultural unity. However, this was not due to ideological factors, but solely practical considerations. Mr. Wołek stated that the basic difference between Dmowski and Piłsudski was the matter of building the Polish state within the framework of certain compromises towards the partitioners, which was assumed by Piłsudski, and the complete political and economic independence of the reborn Republic as the fundamental condition of the struggle for independence.

While characterizing Ignacy Jan Paderewski, Mr. Jakub Lachert, representing the Warsaw Institute, stressed that the reason behind his activity for the Polish state was his diplomatic work during World War I and the formation of the new Polish state, especially in terms of his diplomatic activity in the United States and his personal meetings with the American President Wilson. Paderewski’s pro-independence activities were also noticeable during the Versailles peace negotiations, in which he participated. 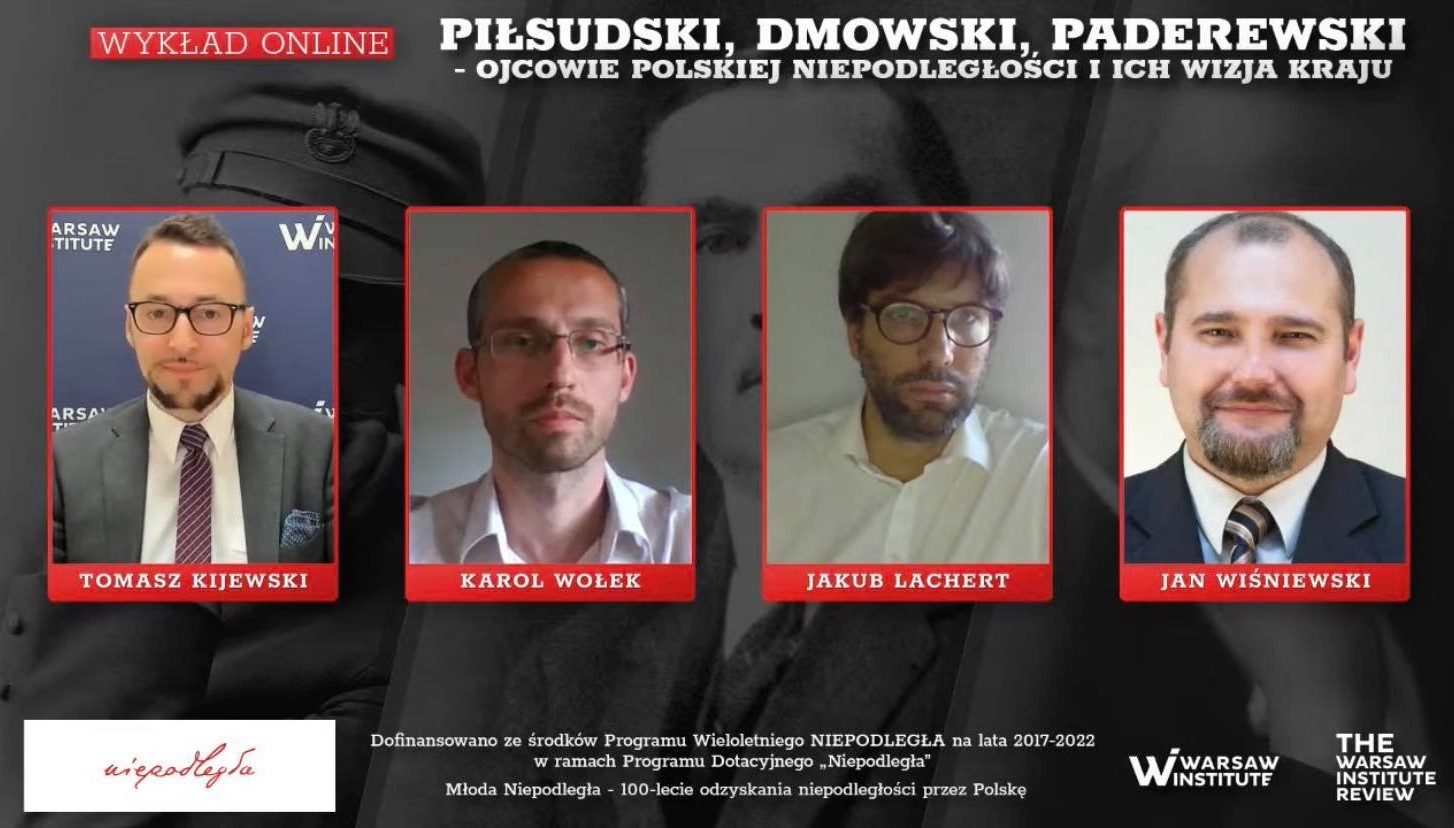 The second part of the debate comprised an exchange of opinions on the significance of the figures listed above for the Polish independence. The core element of the discussion concerned the role of Roman Dmowski and Józef Piłsudski in regaining independence. Karol Wołek highlighted the value of the ideological foundations of Polish statehood presented by Roman Dmowski and his significant role as a diplomat. In turn, Dr. Wiśniewski emphasized the importance of Józef Piłsudski for the politics of the Second Polish Republic and his tactical genius during the 1920 war.

Another element of the dispute was the matter of presenting Roman Dmowski as a national activist in an ethnic sense. His ideas were much broader and also transcended a certain class division that identified Polishness with the nobles and men. Dmowski’s goal was to reject this patriarchal approach – that is why the activities of the National Democracy gathered a lot of women and peasants.

The event “Piłsudski, Dmowski, and Paderewski – the fathers of Polish independence and their vision of the country” was held as part of the program Young Independent – The Centenary of Poland Regaining Independence. Financed under the NIEPODLEGŁA Multiannual Program for 2017-2022.