Event Summary: Nord Stream 2 is a threat to security in Europe

Nord Stream 2 is a threat not only to energy security, but also to the national security of a number of European countries, assessed Svitlana Zalishchuk – foreign affairs advisor to the deputy prime minister of Ukraine in an interview with the Warsaw Institute think-tank on August 5, 2021.

In the context of the reasons why the investment of approximately US $20 billion – Nord Stream II bypassed Poland and Ukraine, the guest of the Warsaw Institute compared the energy policy currently pursued by the Kremlin to the expansionist activities of the USSR. Ms Zalishchuk indicated Nord Stream I and II as instruments of the Russian side’s influence on the situation in the region, which can even be included in the concept of a hybrid war. The Russians are trying to create a monopoly on the region’s energy market.

In response to the question about the prediction of the completion date of the Nord Stream II gas pipeline, Svitlana Zalishchuk indicated the date of August 24, i.e. the day of the establishment of Ukraine’s independence. In order for the pipeline to start functioning, it must be certified by the European Union, thus determining the compliance of the investment with European legal standards. Possible delays may result from the legal dispute and the adaptation of the gas pipeline to the applicable law. According to the former parliamentarian of the Nord Stream gas pipeline, it should not be considered in the context of business or energy, but a weapon that breaks the Ukrainian security shield.

Germany is Ukraine’s strategic partner, but at the beginning of the Nord Stream project, the German authorities ignored the aspect of the geopolitical impact of the investment, but over time – through pressure from other European countries as well as internal pressure – Chancellor Angela Merkel admitted that there was a threat from Russia. 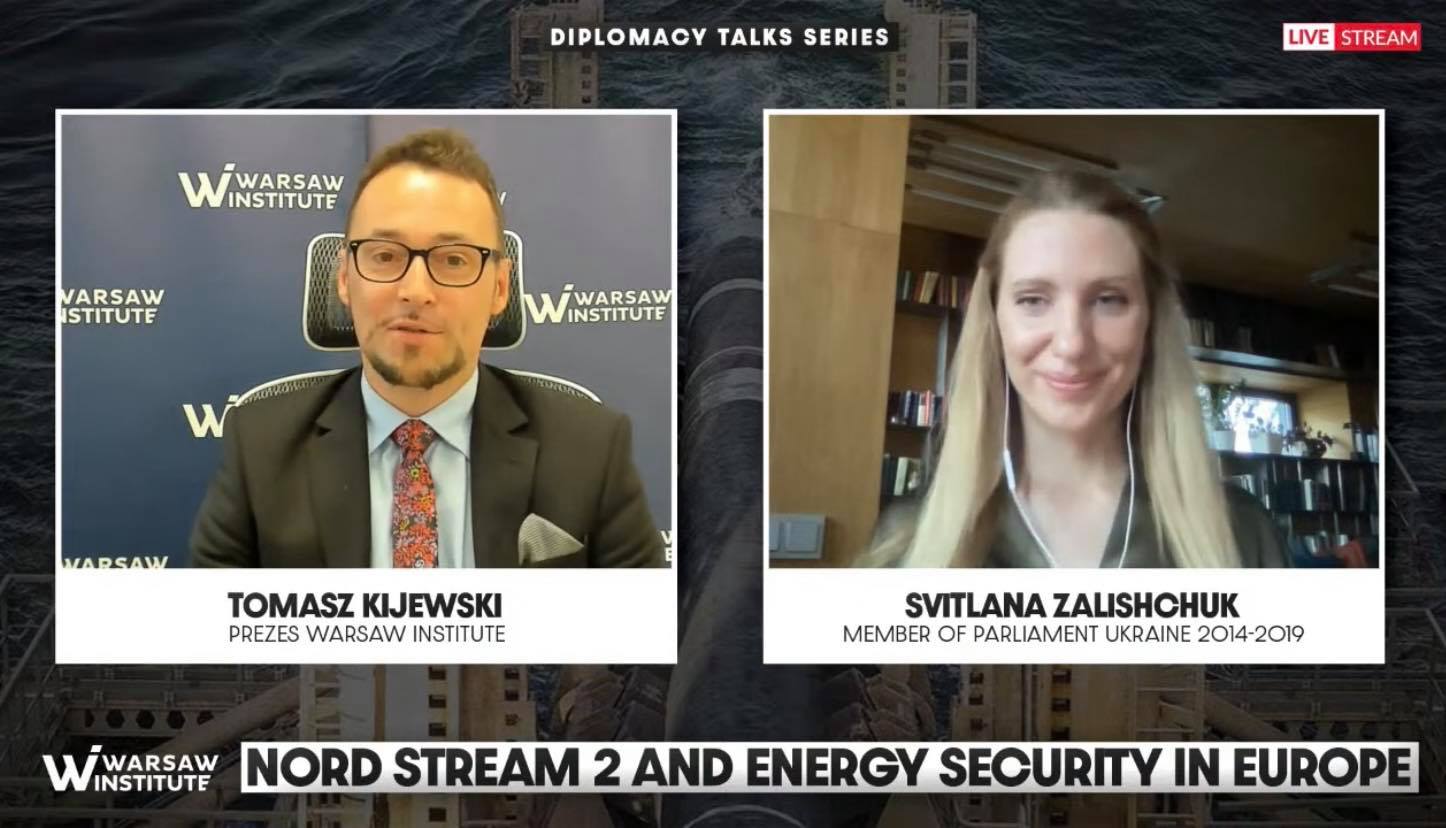 Svitlana Zaliszczuk, Ukrainian politician and journalist. Member of Parliament – Ukraine (2014-2019), advisor to the president of Naftogaz.

Svitlana was elected to the Ukrainian parliament in 2014-2019. He worked in the Foreign Affairs Committee as chairman of the Subcommittee on European and Euro-Atlantic Relations. Svitlana was also a member of the Ukrainian delegation to the Parliamentary Assembly of the Council of Europe 2014-2016.

Svitlana’s political profile covers foreign affairs, security issues, anti-corruption policy, human rights and gender equality. Svitlana was an active leader of the EuroMaidan movement and the founder of several influential national civic platforms. In 2003, Svitlana began her career as an international reporter on TV Channel 5. Svitlana is a graduate of the Institute of National Journalism of the Taras Shevchenko University.

Tomasz Kijewski graduated international relations at the University of Lodz (scholarship at the Center for Transatlantic Studies in Maastricht, the Netherlands) and post-graduate studies at the Military Academy in Warsaw. He is a graduate of National Security Study Program (PASS) at the European Center for Security Studies General Marshall (Garmisch-Partenkirchen / Washington DC). He completed a course at the International Energy Agency (Paris) and was an energy advisor in Calgary. Performing diplomatic duties, for many years he actively promoted Poland and the Polish diaspora in North America. His areas of interest include new forms of international conflicts (hybrid war, asymmetric conflicts), counteracting terrorism, energy security. Prepares a doctoral dissertation.