On April 26, 2021, the think-tank Warsaw Institute had the honor of organizing the online event “NATO in the 21st century: Preparing the Alliance for the challenges of today and tomorrow” which concerned updating the challenges posed by NATO in the 21st century. The guest of Tomasz Kijewski, President of the Warsaw Institute, was Daniel Kochis, Senior Policy Analyst in European Affairs, The Heritage Foundation. 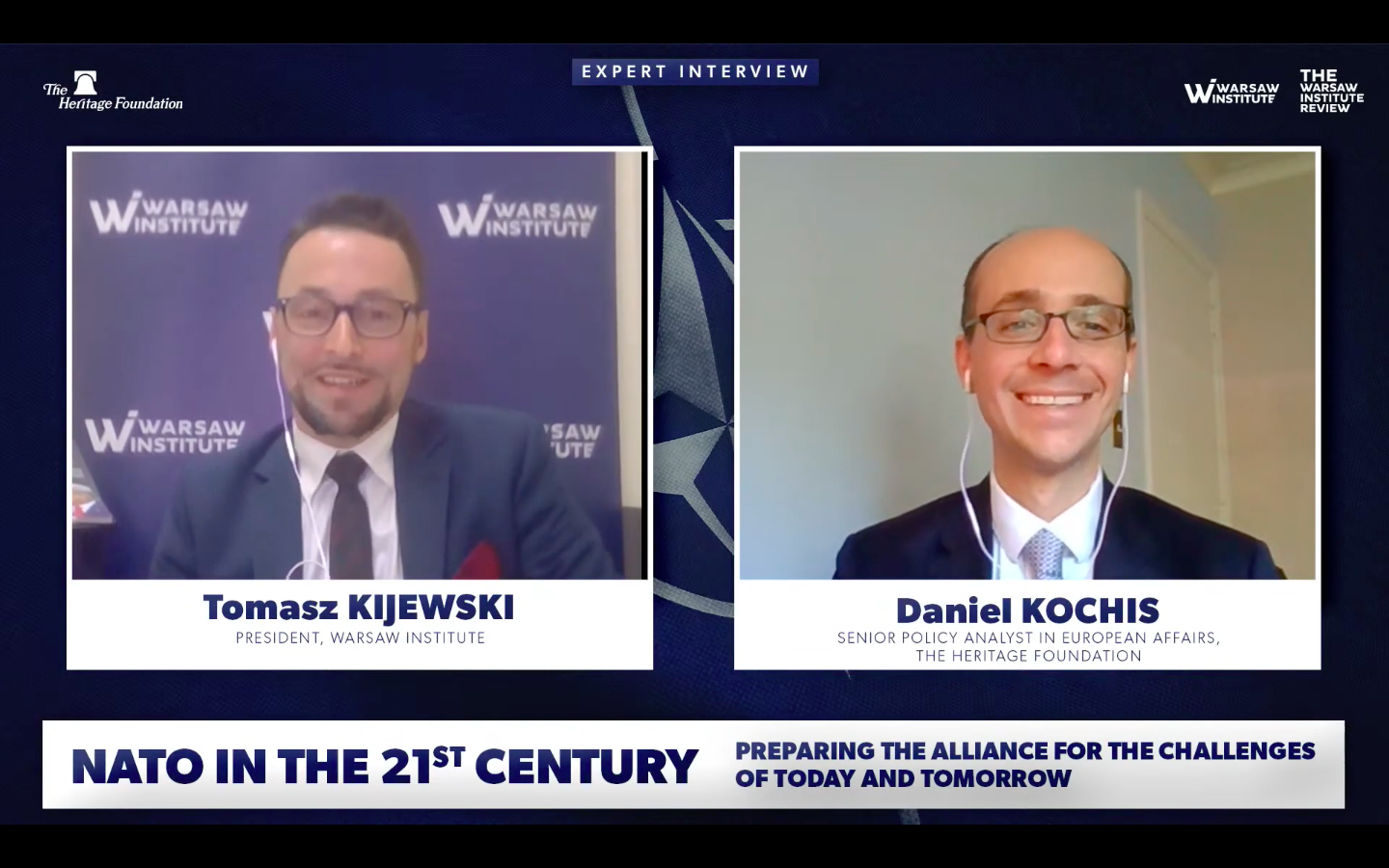 Summary:
• The Baltic states are defenseless without NATO support.
• Russian or Chinese disinformation and propaganda is a new challenge for NATO countries.
• To fight hybrid threats such as disinformation, you need to check the facts and understand the threat.
• The Balkans is an area of “unfinished business”, Kosovo is an example of an undefined situation.
• Cyberattack is a new kind of challenge, any attacker – state or non-state entity. NATO understands the threat quite well.
• Turkey is an important part of NATO, it is the treaty’s second military force, but it is also one of the greatest challenges.

The turn of the century forced NATO to change its perspective. Former opponents ceased to exist. The old challenges have been replaced by new ones. The computerization of the world has made many threats almost elusive, but no less dangerous. In recent years, we have witnessed numerous and large-scale disinformation and propaganda campaigns, mainly on the Russian and Chinese sides. Recently, the number of espionage scandals has also increased – incl. the last cases from Belgium, Italy and Czech Republic. Nowadays, we can see that NATO is coming back to it’s roots – problem of territorial defense.

At the beginning of the conversation, the guest of the Warsaw Institute mentioned a winter war simulation prepared by the Polish Army, which showed that Poland alone is too weak to repel a potential Russian attack. According to the report, the defeat of the Polish army would take place in five days. It is similar with the other Baltic states. Without the support of other NATO countries – potential Russian aggression may be successful. According to NATO calculations, support for the eastern flank may take place in the vicinity of 60 hours in a positive scenario.

The Heritage Foundation expert also spoke about the issue of NATO cybersecurity policy and assessed it positively. Alliance forces are able to quickly identify threats from countries such as China or Iran, but also from the non-state side. The challenge is to create an efficient network operating in every NATO country, not only in the area of main actors.

Daniel Kochis explained that NATO responds in two steps to counter hybrid attacks – understand and get involved. NATO regularly monitors messages from potentially dangerous sources. The visitor notes that we live in a “post-truth” world where it is most effective to present facts to refute falsehoods. The most recent example of massive misrepresentation by states is misinformation on COVID-19.

Daniel Kochis also outlined several threats to NATO for the next 10 years. Russia is among them, but not in a purely military sense, but in a spy or disinformation sense. The guest claims that Vladimir Putin will not change his attitude and Moscow’s current policy will be continued. The joint action of NATO member states will be verified, their effectiveness and willingness to cooperate.

According to Danel Kochis, NATO is not going to have a revolution, but an evolution. The main pressure will be on the budget. It is necessary to continue joint military exercises and strengthen the structures already in place.

One of our viewers asked about the importance of Kosovo for NATO and the possible consequences for other non-NATO countries. According to the guest of our event, the issue of Kosovo and the Balkans was abandoned a bit by the USA and transferred to the European Union. The EU also has a problem with the Balkans due to, inter alia, blockade from France.

Another question from viewers concerned President Biden’s influence on transatlantic relations within NATO. The expert said that only the rhetoric will change to a more gentle one, the rest of the issues will remain rather unchanged. It is difficult to assess real changes from the perspective of the ongoing COVID-19 pandemic.

The next question was about Turkey in NATO. Daniel Kochis stated that this was a very complicated topic in light of recent events. It is impossible to get rid of Turkey because of its strength and influence. The problem is Erdogan’s authoritarian government, which looks bad compared to other treaty states. At the same time, Turkey is NATO’s second military force.

SPECIAL GUEST
Daniel KOCHIS Senior Policy Analyst in European Affairs, The Heritage Foundation Mr. Daniel Kochis is a Senior Policy Analyst in European Affairs at The Heritage Foundation. He specializes in trans-Atlantic security issues regularly publishing on U.S. policy in Europe, NATO, U.S.-Russia relations, and Arctic issues. Kochis is also a regional author for the Heritage Foundation’s annual Index of U.S. Military Strength. He holds a Master of Arts Degree in Comparative Political Science from Fordham University in New York where we received the Richard A. Bennett Graduate Assistantship. He received his Bachelor of Arts Degree in Political Science from the Catholic University of America in Washington, DC.

MODERATOR
Tomasz Kijewski President of Warsaw Institute Mr. Tomasz Kijewski is the president of the Warsaw Institute – a leading think-tank in the Central and Eastern Europe focusing on international relations, hybrid warfare and energy security. He is a graduate of the national security study program (PASS) at the George C. Marshall European Center for Security Studies (Garmisch-Partenkirchen / Washington DC). For many years he served as a diplomat in North America. The areas of Tomasz’s expertise include hybrid warfare and asymmetric conflicts, counter-terrorism, and energy security. He is currently preparing his doctoral dissertation (PhD).