Event Summary: History of the Church in Ćwiklice

On April 27, 2021, the Warsaw Institute and the Warsaw Institute Review held an online lecture. The event “The History of the Church in Ćwiklice” was held as part of the program Young Independent – The Centenary of Poland Regaining Independence. The speakers were Marian Małecki, a professor of the Jagiellonian University and specialist in the history of political system and law, and Fr Sylwester Suchoń, the parish priest of the St. Martin of Tours Church in Ćwiklice. 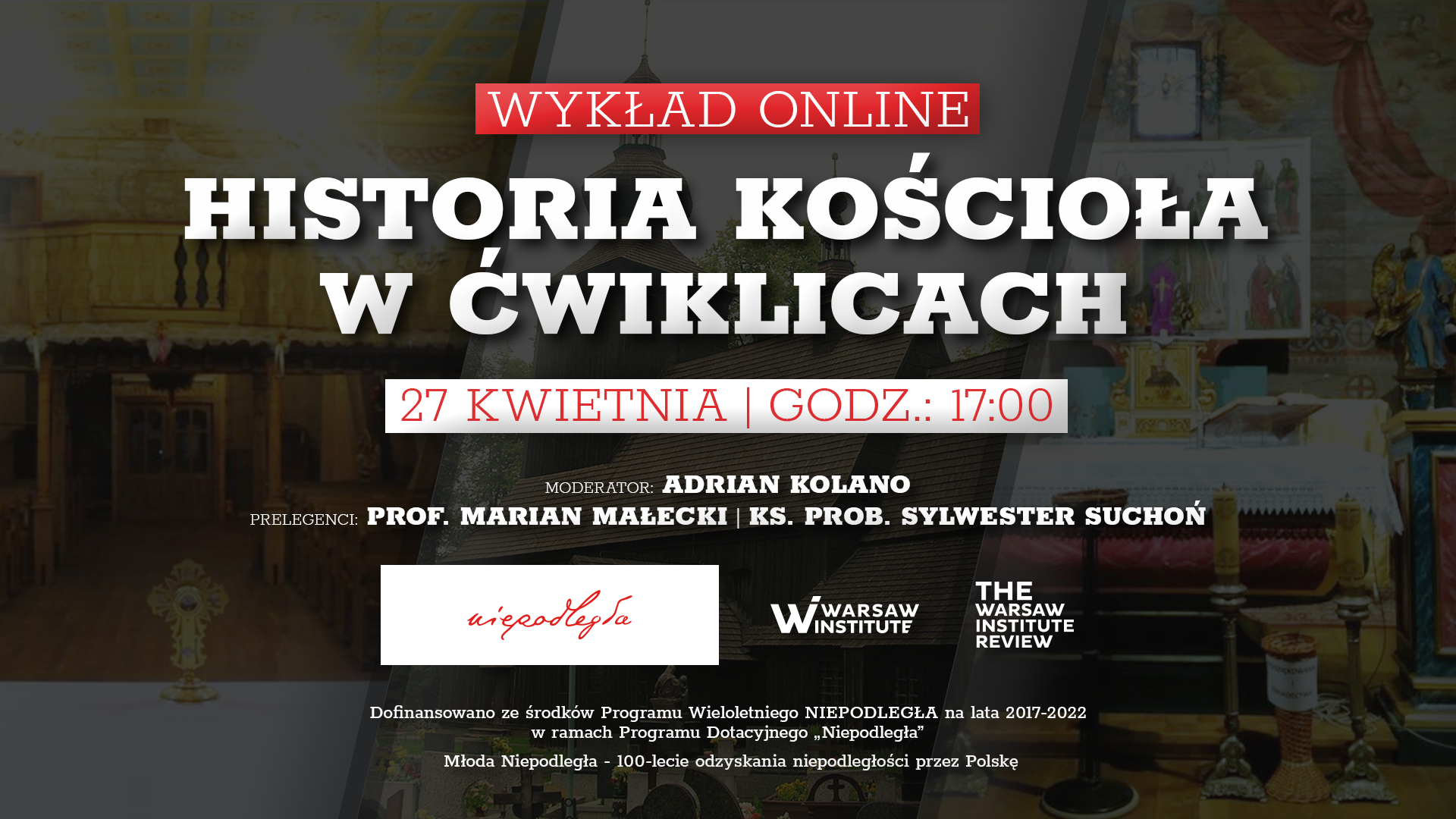 The church in Ćwiklice, which is now part of the Wooden Architecture Trail in Silesia, Poland, was erected between 1464 and 1466, thus being the oldest wooden church in southern Poland. Its provenance was confirmed by dendrochronological analyses and the study of post-visitation decrees from the Cracow Curia. The church has a log frame structure yet it was rebuilt and refurbished many times later. Nonetheless, it features some hidden gems: Baroque altars, a 17th-century polychrome, and a particularly valuable Gothic triptych located in the side chapel.

After exchanging some welcoming remarks and introducing the panelists by the host, Marian Małecki, professor of the Jagiellonian University, first took the floor. He began his lecture by outlining the history of the Pszczyna Land back in the Middle Ages.

It is worth noting that Ćwiklice is a village located within Pszczyna County in Upper Silesia, Poland. The first mention of this place comes from the 1326 Peter’s pence census of the parish of the Oświęcim deanery at the diocese of Cracow where it was listed as Czviclicz. The town granted German city rights while the settlement is said to have taken its name from the moniker of its first settler or founder – “Ćwikło.” Furthermore, the whole Pszczyna Land is filled with history and its remnants. The most important of them are museums or battlefields hiding some weapons ranging from the Middle Ages to World War II as well as sacred pearls being part of the Wooden Architecture Trail.

The first reference in sources to Pszczyna dates from 1303, though the latest research shows the place was settled earlier, in the 13th or even the 12th century. These lands had a great deal of independence at the time of fragmentation. Interestingly, they fell under some foreign influence too. At that time, the place was tinted with Polish and Czech culture that dominated but there were also some German and Hungarian influence, as well as Lithuanian, the last thanks to Helena of Lithuania (also known as Helena Korybutówna). Yet in 1327 John of Bohemia captured also the Pszczyna Land in a move that intensified Czech and German influences in these areas.

Throughout the 16th century the church in Ćwiklice – like many others nearby – was changed by the Reformation. Between 1574 and 1575 Protestants seized control of the parish church in Ćwiklice. The 17th century brought the Catholic Revival, a movement strongly backed by Austria’s House of Habsburg; in consequence, the church returned to the Catholic Church. The jewel in the Habsburg crown, the entire region of Silesia would often attract neighboring powers, with Prussia claiming its rights to become a superpower throughout the 18th century. In 1740, Frederick the Great, who seized most of the region of Silesia, declared the First Silesian War while the House of Hohenzollern eventually secured the lands as sealed by the Peace of Hubertusburg in 1763. From 1871 the Pszczyna Land was part of the newly established German Empire.

When World War I broke out, the German chief of staff held his headquarters in the town of Pszczyna. Both Pszczyna and Ćwiklice also saw the Silesian Uprisings when the Polish population was seeking to have the area transferred to the newly reborn Polish Republic. It is unusual as these areas had not belonged to the Polish state since 1327. What must have been behind it is that until 1822 the Pszczyna Land had belonged to the Archdiocese of Cracow.

Ćwiklice and Pszczyna also suffered from the turmoil of World War II. Due to their geographic location, they were home to many fortresses. On September 1, 1939, the 5th Panzer Division under General Heinrich von Vietinghoff’s command attacked from the Racibórz-Rybnik border. yet were halted some 8 kilometers far from Pszczyna. The Battle of Ćwiklice took place on September 2, north of the St. Martin Church. It was lost and the Polish forces retreated eastwards. Then the German occupation began, a period that also saw a “death march” of Auschwitz prisoners. They headed through both Ćwiklice and Pszczyna as some of them were evacuated eastwards from the latter town and a satellite camp in Czechowice-Dziedzice. Now these places are home to memorials and plaques commemorating the victims of Nazi fascism.

In his lecture, Fr Sylwester Suchoń insisted on the historic context of the church in Ćwiklice, noting it stands out as a genuine symbol of medieval Christianity in Central Europe. A movable historical object from Gothic times is the altar – a triptych from 1475 located in the side chapel. The central part of the triptych depicts the Virgin Mary with the Infant Jesus conversing with St. Martin of Tours and St. Stanislaus of Cracow. In the left wing of the triptych, St. Apostles Peter and Paul, St. Barbara, and St. Catherine of Siena listen to this exchange while in the right wing of the triptych, it is St. John the Baptist, St. James, St. Dorothy, and St. Margaret who listen.

Although the church was first built in the Gothic style, it was partially refurbished in the period of Reformation. At the beginning of the 18th century, the interior of this Gothic church had been rebuilt in the Baroque style by the owners of Ćwiklice – Andrzej Zborowski and his father-in-law, Judge Marcin Kozłowski, both of whom were buried in the crypt. As a result of another reconstruction at the turn of the 19th and 20th centuries, the church was enlarged by the space under the tower.

The oriented building has kept its log frame structure. The nave was designed on a quadrilateral plan, with the more recent chapel built on its southern side. The porch and a sacristy were built near the presbytery. The double-pitched roofs over the nave and the presbytery are covered with roof shingles. At the entrance, there are plaques commemorating parishioners killed in World War I and Silesian uprisings. In 2010, a thorough renovation of the church began under the supervision of Fr Sylwester Suchoń. The restoration included first of all laying reinforced concrete foundations to a depth of two meters, replacing ground sills, partially replacing the tower pillars, reinforcing walls from the exterior with double studs, repairing the roof framework, and the tower, replacing the boarding and roof shingles, as well as drying.
At the entrance, under the tower, there is the “Veil of St. Veronica” with the Savior’s reflected face and the “Arma Christi,” the instruments of torture. The recollection of the Passion of Jesus in this part of the church is completed by the restored Way of the Cross and the Pieta sculpture from the 18th century. On the presbytery ceiling, we can admire the fresco “Assumption of the Blessed Virgin Mary,” and, above the main nave, “Crowning of the Mother of God by the Holy Trinity.” The main altar features a beautiful painting of St. Martin of Tours and figures of saint bishops Adalbert and Stanislaus, Charles Borromeo, and martyr St. John of Nepomuk, also a priest. The altar on the left side of the main nave depicts the Sistine Madonna, St. Joachim, and St. Joseph. In the center of the altar on the right side of the church, there is a painting of the Crucifixion of Jesus, with St. Wenceslas and Christopher looking at the Savior. As a result of the renovation, visitors can now admire the Baroque pulpit and the baptismal font. In 2016, St. Martin’s Church celebrated its 550th anniversary, presided over by Rev. Wiktor Skworc, Archbishop of Katowice. In a few years, another jubilee is to be celebrated – the 700th anniversary of the parish. According to the parish priest, the chances are that the monuments mentioned in the article will one day obtain the title of “monument of history” and be enrolled on the UNESCO list, while it is also possible that the church will be given the title of “sanctuary.”

Certainly, Upper Silesia, the Pszczyna Land, and especially the “pearl” of Ćwiklice are areas and monuments worth visiting as they tell stories about the hardships of Polish history and the identity of Polish culture. According to Fr Suchoń, the Polishness, which manifests itself in hospitality, care for the other person, and history, is present in today’s Silesians, all of which one can experience in person when visiting southern Poland. 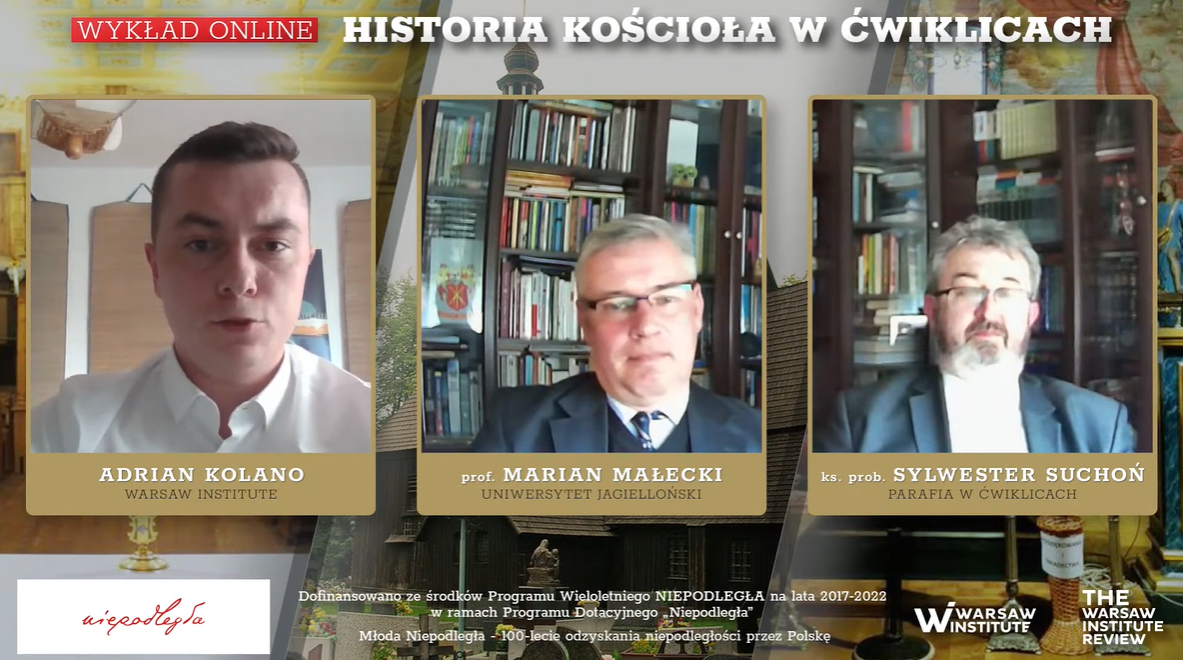 The event “The History of the Church in Ćwiklice” was held as part of the program Young Independent – The Centenary of Poland Regaining Independence. Financed under the NIEPODLEGŁA Multiannual Program for 2017-2022.