On March 4, 2020, in Damascus, Chief of the Planning and International Cooperation Commission – PICC, Imad Sabouni and the Ambassador of China in Syria, Feng Biao signed an agreement on economic cooperation. Under the agreement, China made a donation which will cover the realisation of humanitarian projects. This is another step of Beijing aiming to increase its political influence in the Middle East. 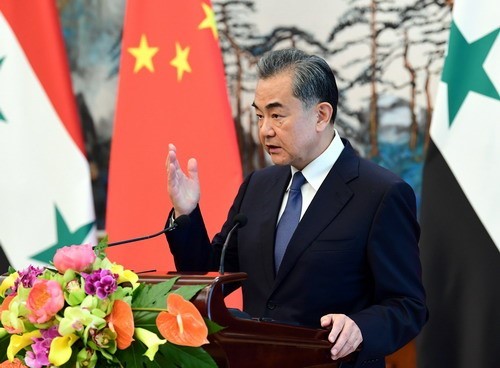 Within the agreement, the Chinese government donated 100 mln yuan (14 mln dollars) to the Syrian authorities to satisfy immediate humanitarian needs. This is the fifth part of financial help for Syria since 2019, which in total amounts to 400 mln yuan (60 mln dollars). Previous donations were channelled to health care, environment and education. Imad Sabouni stated that Chinese-Syrian relations are “unique and historic”.

For several years, China has tried to increase its role, both military and economic, in Syria. When in the middle of 2016 Chinese Admiral Guan Yonfei visited Damascus, regular visits of military advisors from China have started as well. At the end of 2017, it was alleged that Chinese special units reached the port of Tartus (it was denied by MFA of CPC). In July 2017, Chinese warship conducted manoeuvres in the Mediterranean during their way to the Baltic Sea to participate in joint exercises with Russia. It is necessary to add that since the beginning of the Russian intervention in Syria, Chinese authorities positively assess its influence on the stability of the region. It is also visible in the consensus of CPC representatives and Russia in the matter of blocking UNSC’s resolutions aimed at the government in Damascus. The victory of Bashar al-Assad supported by Russian and Iranian powers is considered as a failure of the United States and the West.

According to the media, the Syrian government cooperated with China in the struggle with Islamic Uyghur warriors coming from Xinjiang, China. At its peak, the number of Uyghurs was estimated at 3 thousand, and according to the Chinese ambassador in Damascus, at even 5 thousand. Such overestimation was supposed to legitimise the repressive campaign aimed at Xinjiang citizens and based on the sinicisation policy. The high number of “terrorists” from East Turkestan was supposed to serve as an argument for the introduction of exceptional control measures.

Chinese authorities count on the greatest benefits from the economic cooperation connected with the necessity to reconstruct the Syrian infrastructure. Such actions could be included in the Belt and Road Initiative (BRI) and allow getting access to new ports in the Mediterranean. This situation induces the interest of the Chinese companies in investments in ports as well as in the use of unused railroad from the Syrian Homs to Lebanese Tripoli. According to the UN’s estimations, the reconstruction of Syria after years of the civil war will cost about 250 billion dollars. Since December 2019, Syrian authorities and Chinese construction companies have been negotiating the rules of the reconstruction of the country destroyed by war.

Chinese operations in Syria fit the global policy of Xi Jinping’s administration aiming to enhance the position of Beijing and to weaken the USA’s influences, mainly through economic instruments. One cannot exclude that in the future, powers of the People’s Liberation Army will be deployed in the region. In recent years, Chinese units have been more and more intensely preparing themselves for participation in foreign missions. The deployment of private guard companies which would be responsible for the protection of the investments of the Chinese companies is also possible. In the face of the ongoing conflict and pandemic, one should not expect increased Chinese engagement in Syria. However, intensification of cooperation may come together with the stabilisation of Bashar al-Assad’s position and balance on the global markets.