China-ASEAN Relations in the Time of Pandemic

During the pandemic period, ASEAN countries became China’s number one trading partner, overtaking the European Union. Greater trade cooperation is the result of an increased integration in Southeast Asia concerning Asian and Chinese value chains. Companies from the PRC are also among the most active ones in direct investment as well as the execution of large infrastructure and energy contracts. As part of its vaccine diplomacy in this region, China has transferred the world’s largest quantities of COVID-19 jabs in the form of donations and business contracts. However, provocative actions and territorial disputes in the South China Sea, as well as the unsustainable use of Mekong River resources damage mutual relations. 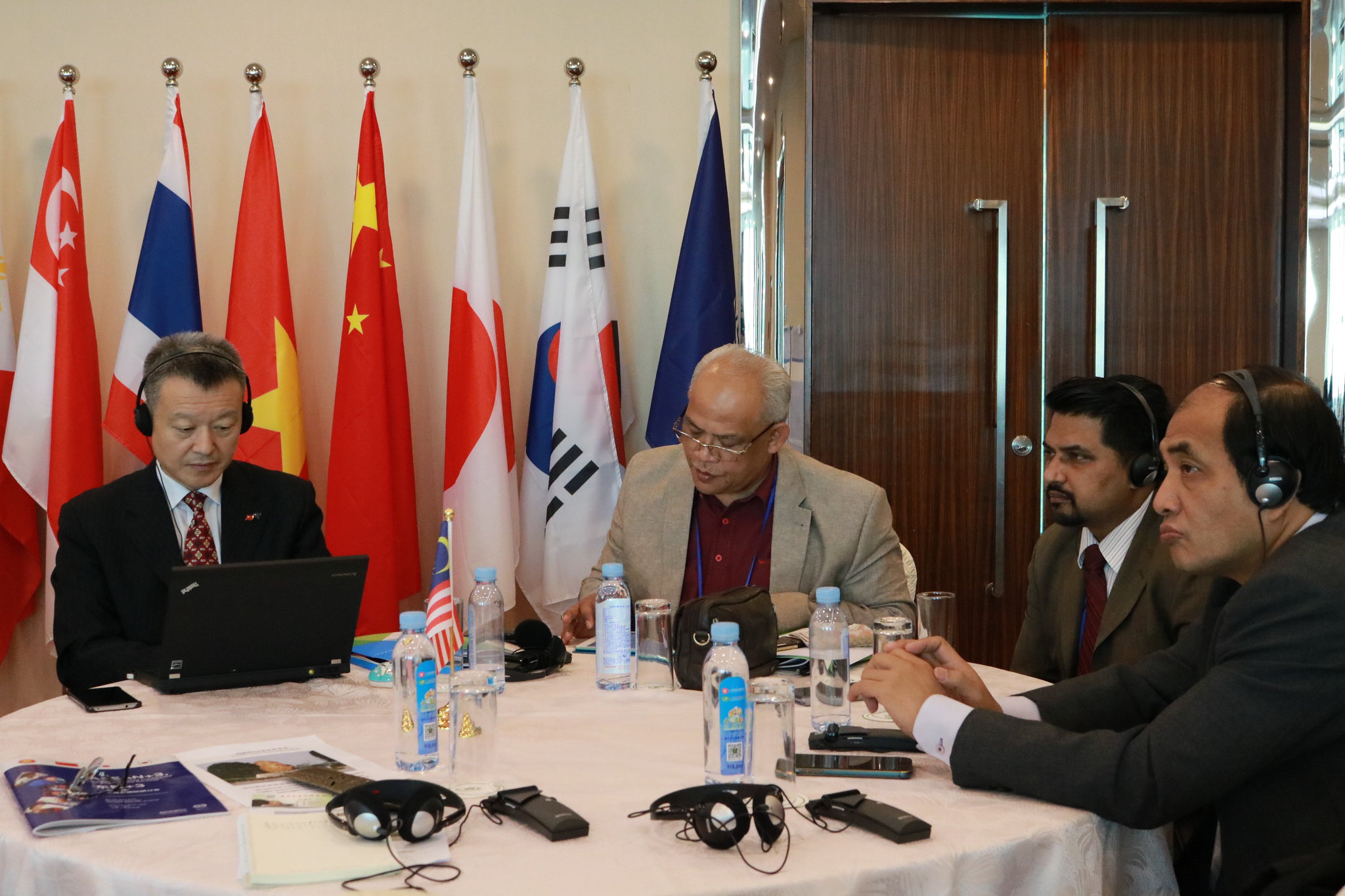 Since 1996, when China became a full-fledged dialogue partner, the Association of Southeast Asian Nations (ASEAN) became one of Beijing’s key partners. This was reflected in the Strategic Partnership for Peace and Prosperity, established in 2003, which has gradually gained importance over the first two decades of the 21st century. The high rank of the region’s states in the PRC’s policy is determined by the geographic proximity, strong economic ties, the unresolved dispute over the South China Sea as well as the rivalry with the US and its allies for influence in the region. However, economic relations within Asian supply chains have come to the fore in recent years. In 2020, for the first time in history, the ASEAN, which comprises 10 countries, became the most significant trading partner of the PRC with a 14.7% share of the total trade volume. The turnover in the difficult year of the pandemic reached $684.6 billion – clearly more than the value of trade with the EU ($649.53 billion) or the US ($586.72 billion). The ASEAN remained China’s No. 1 trading partner also for the first five months of 2021, with a total foreign trade volume of $482.3 billion. As a result of rising labor costs in the PRC, Chinese and foreign companies are increasingly relocating more labor-intensive parts of the production processes to Southeast Asian countries. Increasing rivalry between China and the US promotes the diversification of supply chains, and ASEAN countries, due to low wage costs, growing markets, increasingly better infrastructure, as well as existing and planned trade agreements (ACFTA, RCEP), are an attractive location for investment.

The ASEAN and China maintain numerous mechanisms and formats of interaction, for instance, ASEAN Plus One, ASEAN +3 (China, Japan, South Korea), summits at the ministerial level and among high-level officials, the ASEAN Regional Forum (ARF), the East Asia Summit (EAS), and the ASEAN Defense Ministers Meeting Plus (ADMM-Plus). On March 5, 2021, during the virtual meeting of the Joint Cooperation Committee (JCC), the parties announced: the implementation of the updated protocol to the ASEAN-China Free Trade Agreement, strengthening of regional connectivity under the ASEAN Connectivity plan and ratification of the Regional Comprehensive Economic Partnership (RCEP). The latter was signed on November 15, 2020 by China, ASEAN countries, Australia, Japan, and South Korea. With its provisions coming into effect, it will create the largest trading bloc in the world with a 30% share of global GDP. The agreement focuses on lowering tariffs on trade in goods between the parties and streamlining investment procedures. It is highly likely to deepen the scope of economic interdependence in the East and Southeast Asia.

Between 2010 and 2020, China has also become one of the leading investors in Southeast Asia. According to the ASEAN Investment Report, Chinese companies invested $14 billion in the member countries of the bloc in 2017 and $10 billion in 2018. However, these estimates do not include investments originating in Hong Kong ($6 billion and $10 billion, respectively). Investment and infrastructure remain the key domains of economic rivalry with the US, Japan, and South Korea. Chinese companies are involved in infrastructure projects such as: East Coast Rail Link (Malaysia, $13 billion), Boten-Vientiane railway (Laos, $1.2 billion), Muse-Mandalay railway (Myanmar, potentially $9 billion), China-Thailand high-speed railway ($880 million) or Kyaukpyu port (Myanmar, $1.3 billion). Most of the infrastructure contracts are being implemented under the Belt and Road Initiative, with a significant part of the financial contribution coming from Chinese banks.
Southeast Asian countries are also among the major recipients of China’s COVID-19 vaccines. According to data of the Bridge Consulting (June 2, 2021), China delivered 277.4 million jabs in total, of which as many as 146.4 million were shipped to Asia-Pacific countries. Indonesia received 86 million of them as part of a 140 million-dose contract, ranking it first in the world in terms of the number of vaccines purchased from the PRC. The Philippines also chose to purchase 26 million jabs, 6.5 million of which have been delivered to date. Nevertheless, China’s vaccine diplomacy does not rely on exports alone. Beijing has given over six million doses free of charge to ASEAN countries (Philippines – 1 million, Cambodia – 2.2 million, Thailand – 1 million, Laos – 1.9 million, Myanmar – 0.5 million).

Despite intense political and economic cooperation, the contentious issues between ASEAN countries and China are not absent. The most prominent of them is the territorial dispute in the South China Sea. In 2013, the government in Manila filed a lawsuit against China at the Permanent Court of Arbitration in the Hague for violating the Montego Bay Convention. The ruling, announced in July 2016, found that the Philippines were right and rejected China’s territorial claims (the area defined by the “nine-dash line”). However, the authorities in Beijing announced that they would not respect the Court’s decision, which, as the authorities of the PRC believe, violates their sovereign territorial rights. Following this announcement, the Chinese leadership attempted to settle this dispute directly with ASEAN countries. In 2017, both parties announced a draft Code of Conduct (CoC) for the South China Sea (SCS). Between 2018 and 2019, a project and a draft version of the COC were presented, but still no agreement was be reached. In August 2018, Chinese Foreign Minister Wang Yi announced that negotiations on the COC would end within three years. On June 7, 2021, during the China-ASEAN Foreign Ministers’ Summit in Chongqing, China, Chinese Minister Wang Yi communicated to other participants of the summit that “we should effectively implement the Declaration on the Conduct of Parties in the South China Sea (DOC), advance consultations on the Code of Conduct in the South China Sea (COC).” However, on June 16, 2021, during the ASEAN Defense Ministers Meeting, Wei Fenghe, representing the PRC, announced that “[China’s] national interests must also be sufficiently respected and protected” as well as that “on issues related to Taiwan, Xinjiang, Hong Kong, and the South China Sea, China is determined to safeguard the country’s core interests.”

On May 31, 2021, the Malaysian military detected a tactical formation consisting of 16 Chinese aircraft in airspace off the coast of Borneo. In March, Philippine authorities reported that some 200 Chinese-flagged fishing vessels were anchored nearby the disputed Whitsun Reef. Such recurring incidents in recent years have been interpreted as a message that China has no intention of giving up its claims. They represent one of the strongest arguments for maintaining partnership with the United States in the area of security and modernization of own armed forces.

Differences are noticeable also over the management of the resources of the Mekong River Valley. China is the dominant power in the subregion, which controls the river basin as well as uses it to generate electricity, obtain food, and transport goods. However, the exploitation of this area causes concerns about the environmental and livelihood impacts on local communities, in addition to access to water resources. China and Myanmar are not part of the Mekong River Commission (MRC), making it difficult for the other four countries (Vietnam, Cambodia, Laos and Thailand) to effectively manage the resources and address growing concerns. China has three dams on its stretch of the river – Mawan, Duchashan, and Jinghong. Four more are planned, while the Xiaowan Dam, which would be the world’s tallest dam (292 m, or 958 ft) and could disrupt the natural water cycle, is already under development. The construction of dams on the river is linked to the growing problem of drought in some regions and, in the future, it could become yet another source of tensions in relations with ASEAN countries, which are the members of the MRC.

Southeast Asian countries constitute a heterogeneous group, within which one can distinguish states with pro-Chinese (Myanmar, Laos, Cambodia), balanced (Indonesia, Malaysia, Thailand) and anti-Chinese (Vietnam) tendencies. The common denominator for most of them, however, is a concern about the Chinese revisionism in the region. This is noticeable, among others, in cyclical opinion polls, conducted by the Institute of Southeast Asian Studies. They indicate that economic cooperation does not lead to a growing confidence of the public in China’s policies. For this reason, the leading ASEAN countries (Indonesia, Malaysia, Thailand, Singapore, Vietnam) will seek to develop partnerships with other key actors (the US, Japan, South Korea, India, the EU). Such a solution is expected to, on the one hand, facilitate the development of the region and speed up the infrastructural development that was negligent for years, and on the other hand, reduce risks in the area of security. The rivalry between the superpowers for influence over the Indochinese Peninsula, despite obvious jeopardies, is likely to bring numerous benefits to the countries of the region in the form of investments, loans, and projects in the area of connectivity.