In mid-November, mass protests against a drastic increase in fuel prices broke out in Iran. Although the demonstrations were, for the most part, bloodily suppressed over a dozen or so days, the situation remains unstable. The revolt of citizens is the result of a series of systemic problems and will probably resurface again in 2020. 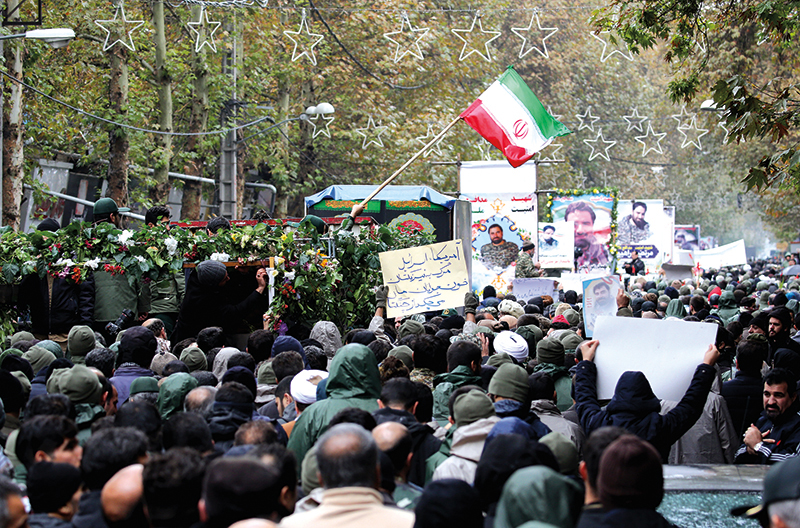 Reports on the course of the protests in Iran were severely limited due to an unprecedented blockade of the Internet, imposed by the country’s authorities to hinder the demonstrators from holding rallies. Despite this, the general public all over the world was gradually being informed about tens and later even hundreds of murdered protesters, along with thousands of detainees.

At first, it may seem odd why the pacification of the demonstrations was so dramatic if people decided to take to the streets “only” because of the increase in fuel prices. The fact is, however, that the Iranian economy is being hit hard by US sanctions and economic demands are often combined with demands for political and social changes. Moreover, the November protests were not just a one-time revolt, but were another such event over the last two years.

The protests that have been erupting constantly in Iran since 2017 are often juxtaposed with the so-called “Green Movement” of 2009, when millions of Iranians had been protesting unsuccessfully against electoral fraud for many months. However, while 10 years ago, citizens rebelled against the authorities due to political reasons, today, the immediate cause why Iranians are taking to the streets is economic hardships. This was the case in the winter of 2017, as well as in many subsequent protests throughout 2018 and 2019.

The financial situation of the average Iranian citizen had been difficult even before the United States withdrew from the so-called “nuclear deal”. Although the country’s economy as such was indeed developing at a fairly fast pace in the years 2016-2017 (freedom of trade with the West, the ability to bounce back on the oil market), however, all this – contrary to the promises of the authorities – did not translate into a higher quality of life of ordinary people. Although this was at the time the root cause of the protests, the problems began to worsen dramatically after the reintroduction of US sanctions in 2018. Since then, Iran’s GDP growth has turned into a decline, oil exports (the most important source of budget revenues) have decreased several times, and prices in the country have started to rise dramatically (the inflation rate is even several dozen per cent). Suffice it to mention that at least one-third of the country’s population is currently living below the poverty line.

In this context, it should come as no surprise why the sudden, poorly communicated increase in fuel prices (50% for 60 litres per month and 300% for larger volumes) must have caused fury among Iranian citizens: especially when one realises how important the cost of fuel is for the prices of a range of other products. It did not take many hours before the protests erupted across the country and the demonstrators began to storm public buildings and other facilities. In response, the authorities cut off Internet access for citizens on an unprecedented scale (some media outlets even reported that it has been the largest blockade of access to the network in history) and decided to bloodily suppress the protests.

The mass demonstrations in at least 100 cities were relatively quickly pacified: after all, only a dozen or so days were needed to deal with the problem. However, the balance remains tragic. The authorities in Tehran provided only detailed information about statistics on property damage: hundreds of burned public buildings, petrol stations, vehicles and military bases, etc. were recorded. Nonetheless, the figures can be further supplemented with estimates of the number of persons killed published by other media entities. According to Amnesty International, the number of fatalities could exceed 300. Moreover, the US Embassy in Tehran has provided even more shocking data: more than 1,000 people could have been killed. Basing on casualty recordings posted on social media, it should be stressed that the protesters were often killed deliberately by, for example, snipers shooting from rooftops.

Although the protests were suppressed, it seems naive to think that they will not erupt again in the upcoming year, 2020. On December 8, President of Iran Hassan Rouhani presented the country’s budget for the next year (the Iranian New Year starts in March), taking into account a 70% decrease in key revenues from the oil sector. Despite the fact that the budget assumes a 15% increase in wages, this increase still does not match the level of inflation.

The upcoming parliamentary elections in Iran, scheduled for February 2020, may turn out to be a convenient trigger for another wave of protests. Of course, all candidates are being checked and approved by the Guardian Council, which means that the soon-to-be-held elections will naturally not even resemble free and fair elections. Nonetheless, it seems that the elections may still give Iranians a perfect pretext to take to the streets again. Given the fact that the authorities have not withdrawn from the November fuel price increases, such a scenario should not be excluded.