Inviting Russia’s President Vladimir Putin to the wedding of Austrian Foreign Minister has been sparked a storm also outside Vienna. Putin’s relations with the members of Austria’s ruling elite have already gone beyond generally accepted diplomatic principles. Apart from participating in the Nord Stream 2 project, the Austrians decided in June to extend the contract for Russian gas supplies. Austria’s partner services have recently been alarmed by the fact that a pro-Russian party forms a political coalition in the Austrian government while their politicians have considerable influence on the country’s security structures. The Austrian press has quoted an anonymous employee of the Office for the Protection of the Constitution and Counterterrorism (BVT) who feared that any top-secret information from his office might be deliver to Putin’s desk only a day later. 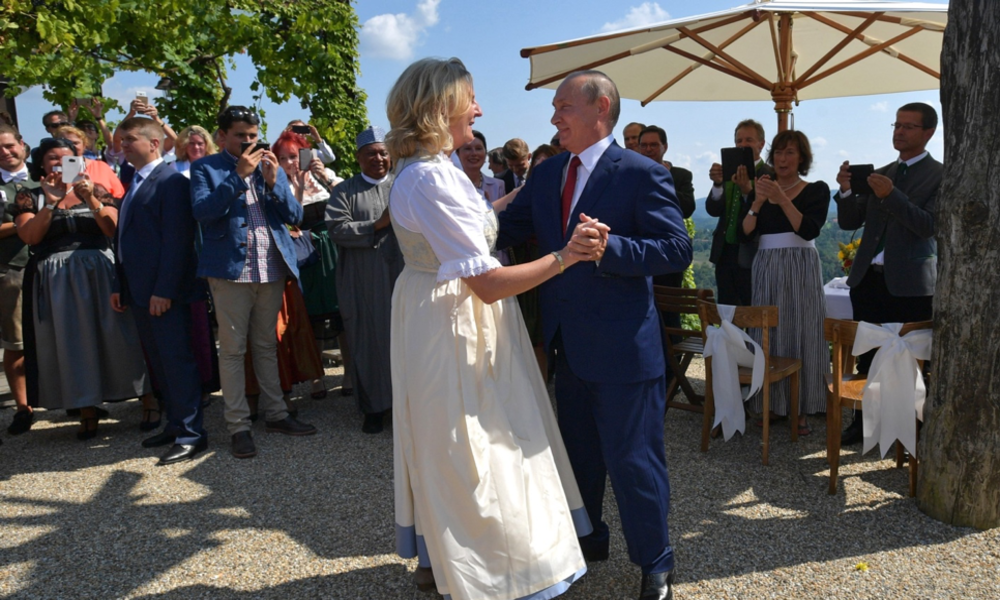 On August 18, Putin attended the wedding reception of Austrian Foreign Minister Karin Kneissl, appointed by the far-right Freedom Party (FPÖ). Initially, Putin’s visit was referred to as “personal”; still, President later admitted that he had managed to find some time to off-record talks both with Austria’s foreign minister (the bride) and Chancellor Sebastian Kurz, who were among other guests. In addition, the wedding was attended by Austria’s Vice-Chancellor and FPÖ leader, Heinz-Christian Strache. Moscow’s friendly relations with Vienna are additionally increased by the fact that Putin visited Austria in June in first trip after re-election. Since December 2017, Austria has been governed by a coalition of the centre-right Austrian People’s Party (ÖVP) and the populist Austrian Freedom Party (FPÖ).

Chancellor Sebastian Kurz of the Austrian People’s Party has repeatedly said that his country played the role of “a bridge between East and West”; however, the FPÖ party has gone further by signing in 2016 a formal cooperation agreement with Putin’s United Russia party. Leaders of the FPÖ have repeatedly called for international sanctions against Russia to be lifted. Moreover, Austria did not decide to follow the example of other Western states and to expel Russian diplomats who might have had some connections with Russia’s services after the attempt murder of Sergei Skripal. Even if Austria does not belong to NATO member states, it has been considered as an important partner of the Alliance in terms of intelligence and counterintelligence services: for instance, Vienna is home to numerous international organizations, including UN, OPEC, and OSCE.

According to the Austrian opposition parties as well as some of the country’s media, Interior Minister Herbert Kickl – who serves as the FPÖ’s party’s general secretary – is trying to exert influence on the state’s special services. The Freedom Party politicians were supposed to stand behind the police raid on the BVT’s main offices, as reported by The Washington Post the same day as Putin’s visit to the Austrian province of Styria. During the raid, the police was said to take away top-secret files. Formally, the police action in the BVT headquarters was conducted as part of a joint operation with South Korea to obtain North Korean passports that were being printed in Austria. Nonetheless, in could be all about discrediting chiefs of counterintelligence services in order to remove them and replace with loyalists. Thus, the interview of a former head of Germany’s foreign intelligence service could be interpreted as the last warning for the Austrians. On August 23, August Hanning told Germany’s Bild newspaper that the states should be extremely cautious when sharing information with Austria. A former head of German intelligence suggested that Austrians “cannot protect its own secrets or the sources and sensitive information of its partners.” A few days earlier, The Washington Post had reported that some Western intelligent services “had frozen” the information sharing with Vienna. However, the head of Austria’s BVT, Peter Gridling, denied that there has been any reduction in cooperation; even though, the opposition demanded the National Security Matter to be called within the next few days.