The signing of the Convention on the legal status of the Caspian Sea officially ended a long-time dispute between its coastal states over the reservoir and its formal division. Interestingly, the problem has been solved in a quite original way: the parties to the agreement have recognized the Caspian neither as the sea nor the lake. The Aktau deal has opened the way for the construction of some trans-Caspian pipelines that can be used to transport hydrocarbons from Central Asia to Europe while bypassing Russia’s territory. So why did Moscow agree to sign the treaty? 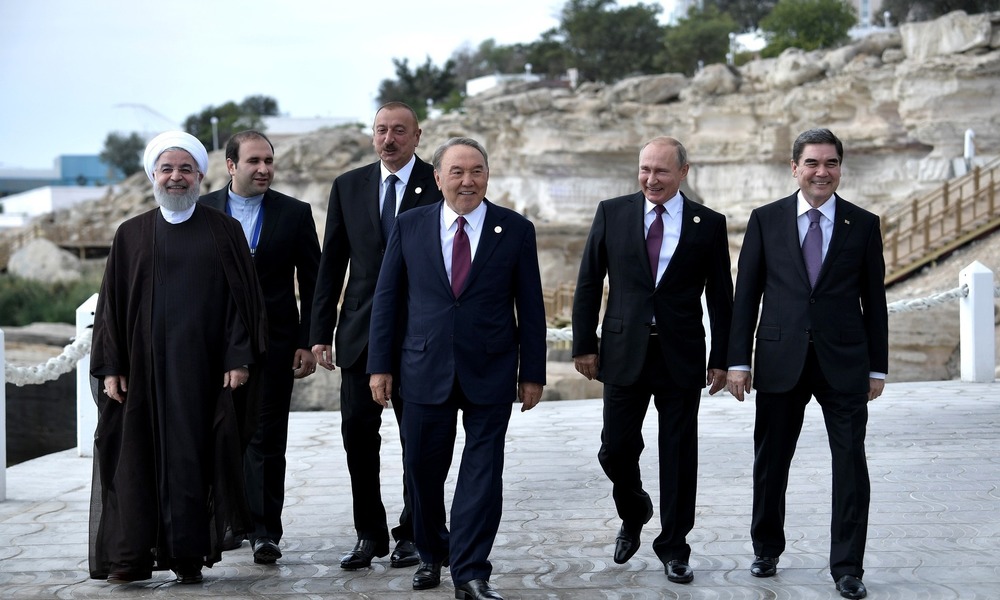 On August 12, five Caspian states – Russia, Iran, Azerbaijan, Kazakhstan, and Turkmenistan – met in the Kazakh city of Aktau to adopt the Convention on the legal status of the Caspian Sea. The reservoir has been granted a special legal status and it is now perceived in terms of an “intra-continental body of water.” Thus, no provisions of international law – neither regarding the sea nor the transboundary lake – may be applied. More detailed delimitation is yet to be specified; nonetheless, it is already known that the seabed will be divided according to different rules than the body of water. In accordance with the Convention, Caspian littoral states will be granted full jurisdiction over the raw materials; however, it will not be the case of the legal status of its waters.

Formally, works on the treaty has been in progress since 1996. So why have all five states managed to reach a consensus only recently? Moscow and Tehran has mostly disputed over how the reservoir and its energy resources would be divided between coastal states. And it was quite recently that security issues have brought the energy issues to a halt, both for Moscow and Tehran. Both Russia and Iran used their best efforts to prevent any military forces from being deployed to the reservoir. The two countries do not approve the fact that the Americans are using Kazakh and Azerbaijani ports as transit points for shipping arms to Afghanistan. During the summit in Aktau, Iran’s President Hassan Rouhani said that the convention bans the presence of foreign armed forces in the Caspian Sea.

The Caspian Sea is rich in hydrocarbons; in addition, it constitutes a natural barrier between Europe and huge deposits of Turkmen natural gas. In 2012, Caspian reserves were estimated at 48 billion barrels of oil and 292 trillion cubic feet of natural gas. The deal will make it easier to develop mining operations as well as exports of the raw material. For instance, according to the convention, Russia cannot interfere in the implementation of the Trans-Caspian Gas Pipeline Project (TCP) that would connect Turkmenistan with Azerbaijan. The TCP would provide the Turkmen with a direct access point to the transport infrastructure to Europe, commonly known as the Southern Gas Corridor. And the example of the Trans-Caspian Gas Pipeline would possibly be followed by other states. For instance, the majority of oil exports from Kazakhstan is transported via land connections – either by Russian pipelines or tankers through the Caspian Sea. And the emergence of the Trans-Caspian Gas Pipeline would open the possibility to build another pipeline along the same route.

So why did the Russian decide to unblock the prospect for building the TCP, the more so that the pipeline would bypass its territory? It is possible that Moscow seeks to gain yet another argument to be used during the Brussels talks and to prove that Russia has no intention to compete with the Nord Stream 2 pipeline. However, it seems that Europe does not need Turkmen gas. On one hand, European gas consumption, which is currently satisfied by Russian supplies, is unlikely to increase in a significant way in the near future while, on the other hand, there emerged some other competitors, such as Egypt. Also the situation has changed: In the past, Moscow could be afraid that the Caspian resource would constitute a major competitor for Gazprom; however, nowadays, Turkmen supplies would sooner or later challenge the American LNG deposits. But the Russian could have a completely different motivation. The Trans-Caspian Gas Pipeline would translate into the diversification of Turkmen gas exports. The fourth-largest natural gas holder in the world, Turkmenistan sells the great majority of its gas deposits to China. Such large amounts of Turkmen gas exported to the Chinese market will have a negative impact both on the price and the volume of Russian supplies to China transferred through the Power of Siberia pipeline whose construction is currently being in progress. So Moscow can easily halt the idea of TCP, for example by resuming its gas imports from Turkmenistan, suspended in January 2016. Such ideas have already been mentioned by Russia’s Ministry of Energy. Thus, the Russians can either buy Turkmen raw material or offer to transit it to Europe via their gas pipelines.