An Alternative History Created by the Kremlin

History is one of the areas in which Moscow is applying its ‘active measures’ to undermine the unity of NATO and the EU, as well as to weaken the countries which are clearly opposing Russia’s aggressive policy in Central and Eastern Europe. This time, thanks to the effective actions of the Polish government, the narrative proposed by the Kremlin has not gained the approval of the international community. However, it is necessary to develop mechanisms that will allow for a more effective response to similar attempts to rewrite history. 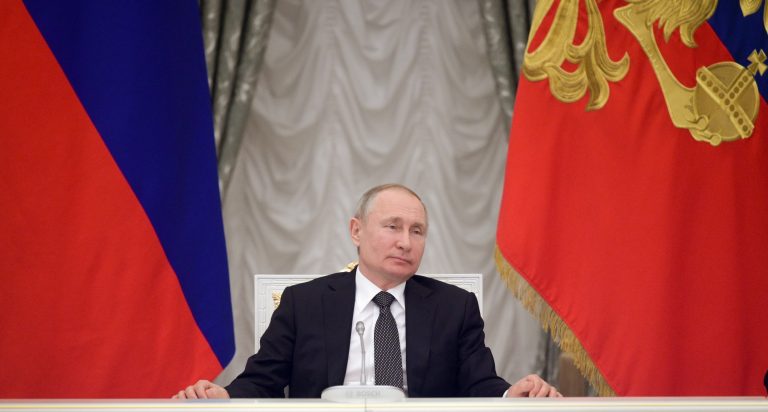 Although almost 75 years have passed since the end of World War II, this subject still cannot be definitively closed. On the one hand, Poland still bears the consequences of the overwhelming losses suffered during the war itself and under the rule of the communists sent from Moscow after the war. On the other hand, however, Poland is painfully affected by accusations against it coming from various directions. Unjust accusations against Poland for its alleged involvement in the Shoah could be heard from prominent Israeli politicians and public figures. Recently, these individual voices have been joined by a slanderous choir conducted by the Kremlin, which absurdly and openly blamed Poland for the start of World War II – the bloodiest conflict in history.

Just before Christmas, on December 23, 2019, Vladimir Putin, in his speech during a meeting with officials in Russia’s Ministry of Defense unexpectedly attacked Józef Lipski, Poland’s pre-war Ambassador to the Third Reich. He accused the diplomat of parleying with Hitler to solve the Jewish question and called him “a bastard and an anti-Semitic pig“. To support his opinion, President Putin presented an allegedly secret note from 1938,  which can be found in the Russian archives among many documents pillaged from the entire former Soviet sphere of influence. The verbal attack on Ambassador Lipski blatantly omitted facts and was deprived of the context of his actions. As indicated in the announcement of the Union of Jewish Religious Communities in Poland with the Chief Rabbi of Poland, Vladimir Putin indulged in exceptionally scandalous manipulation. Józef Lipski was trying to implement Poland’s policy of supporting the emigration of the 10% Jewish minority, also in agreement with the Zionist movement, which received secret military support from the Polish government. The same Ambassador Lipski was actively involved in supporting thousands of Polish Jews, who were expelled by the Third Reich in 1938. Accusing him of anti-Semitism based on a sentence taken out of context is an example of particularly vile manipulation.

However, this was not the first time that the Russian President said such things. A few days earlier, he accused Poland of the partition of Czechoslovakia and justified the entry of the Red Army into the Second Polish Republic in September 1939. This allegation was the first of a whole series of statements made by Russian politicians and public figures, in which attempts were made to unjustly attribute to Poland the co-responsibility for the outbreak of World War II and cooperation with Hitler. These deliberations even went egregiously further – an example of which was even that Yevgeny Satanovsky, one of the most famous political scientists in Russia, praised Stalin’s decision to murder 22 thousand Polish officerswho were in Soviet captivity after the Soviet invasion of Poland in 1939.

The Russian disinformation offensive in the domain of politics of history was confronted with a strong and effective response from the Polish government. Apart from the official announcements of the Ministry of Foreign Affairs, the statement of the Polish Prime Minister Mateusz Morawiecki was imperative, in which he referred in strong words to the “deliberate lies” of the Russian President. The words of the Polish Prime Minister received much attention around the world, reaching billions of recipients. Such institutions as the European Parliament and the European Commission have condemned Russia’s attempts to rewrite history. The US Ambassador to Poland, HE Georgette Mosbacher, also published a widely commented entry in which she reminded that the real initiators of World War II were Hitler and Stalin.

Contrary to what was feared, Vladimir Putin did not continue his accusations during the celebration of the 75th anniversary of the liberation of the Auschwitz-Birkenau, German Nazi concentration camp, which was organized at the Yad Vashem Institute by Viatcheslav Moshe Kantor, known for his close relations with the Russian President. Poland observed the event with great concern. The fact that the Polish President Andrzej Duda was not allowed to speak at the ceremony, and, as a result, refused to take part in it, was widely commented on. Finally, no new accusations against Poland were made during the event. It does not mean, however, that Poland can feel relieved now and consider this problem as solved.

The myth of the ‘Great Patriotic War’ plays an enormous role in contemporary Russia. Among the disasters, ubiquitous economic and structural problems, the history of the victory over Hitler is a crucial factor in uniting the Russians around a shared legacy paid for with the blood of millions. Myth is useful primarily at a national level, but it is also a useful tool in foreign policy. The memory of the joint victory over the Third Reich may give the Western leaders the false impression that cooperation with Russia is possible and can actually be beneficial.

However, the truth about the role of the USSR in World War II is not as glorious as the Kremlin’s ruler would have liked. The Hitler-Stalin Pact, signed by Ribbentrop and Molotov, was the leading cause of the outbreak of the most significant conflict in human history, which claimed the lives of as many as 27 million citizens in the USSR alone. The aggression against Poland, the occupation of Lithuania, Latvia, Estonia, and Bessarabia, as well as the Winter War in Finland ultimately mirror the Third Reich’s activities in Norway, Denmark, France, Belgium, the Netherlands, the Balkans, and the Atlantic. The consensual cooperation of the two totalitarian regimes contrasts drastically with the current narrative in Russia.

The truth about the Red Army’s soldiers’ attitude towards the “homeland of the proletariat” does not fit into the Kremlin’s history either. The Soviet Union was such a dreadful place that its citizens could hardly believe that a worse fate was possible. They were wrong because the Germans did everything to outbid Stalin and his companions. However, before this became clear, by December 1941, 2.5 million Soviet prisoners of war were taken prisoner in Germany. Some of them even willingly gave away their weapons because they did not intend to defend “communist paradise.” Numerous cases of building welcome gates and celebrating by civilians of Wehrmacht units entering the USSR were observed. These are also the stories that today’s Kremlin is trying to hide because they do not fit the stories of the war of men and united resistance against the invader.

A similarly authentic image of the “liberation” of Central Europe by the Red Army is at odds with the heroic vision, still very much alive in the consciousness of contemporary Russians. The rapes, murders, and pillaging, which marked the route of the Red march, made a daunting impression on all the “liberated” nations.It was only a prelude to almost half a century of slavery and terror, which claimed hundreds of thousands of victims. The fact that the NKVD and the auxiliary formations kept their victims in the same execution sites where the Gestapo did before them, best illustrates the nature of this “liberation”.

The contrast between the myth of the Red Army’s heroic victory over fascist Germany and the real causes and course of World War II is a problem for Russia, especially in the year of the 75th anniversary of this conflict. The Kremlin wants to take advantage of this opportunity to integrate society as far as its own goals are concerned and improve declining moods. Russia’s worsening economic situation only reinforces this need. The traditional victory parade in Red Square is an opportunity for President Putin to present himself as one of the world’s key political leaders. This is a vital context for the propaganda attack on Poland, which was undoubtedly also meant to prepare the ground and neutralize in advance of a narrative in opposition to the Russian one. Fortunately, the result of the Kremlin’s actions has so far been the opposite, and the reaction of the international community was unequivocal.

There is, however, another side to the Russian offensive of historical propaganda, pointed out by Professor Sławomir Cenckiewicz and Dr Bolesław Piasecki[1] – it is an example of the use of active measures to violate the foundations of Polish security. The disinformation campaign carrying an exceptionally strong emotional charge for the Polish society is aimed at undermining the international position and internal stability of Poland.The intention of engaging Poland in yet another big conflict is to create the impression of a rogue state obsessed with Russia in the historical and contemporary context. The issues of internal conflicts in Poland cannot be overlooked either. The Russian provocations are another opportunity to build new disputes and mutual accusations of intelligence connections with Moscow. The last attack was also an excellent opportunity to test the reaction mechanisms in a special holiday period. After all, tests are a permanent element of the activities of the secret services of each state.

Poland was a carefully selected target. It is a country openly opposing the aggressive policy of Russia in the region and loudly speaking about the real role of the USSR in World War II. The Three Seas Initiative, energy diversification, tightening of cooperation with the US in the region, and dynamic arrangements to strengthen the eastern flank of NATO – these are actions that do not incite particular enthusiasm in Moscow, where precisely the opposite direction is desirable.At the same time, Poland is being treated with a visible distance by many Western leaders, especially within the EU. For this reason, Warsaw seems to be a convenient target for attack, as it can count on a weaker reaction from its allies. In this case, however, the Kremlin’s forecasts turned out to be wrong­ – the response was decisive and involved not only the leaders of the states but also the EU institutions. Nevertheless, this was another opportunity for Russia to undermine unity and create divisions within structures, which has been the goal of its secret services since Lenin.

To sum up, history plays a unique role in the contemporary position of Poland. Although Moscow’s last offensive was not successful, we should be aware that Russia will make similar attempts in the future, likely to be accordingly adjusted from its deductions of this most recent undertaking. Therefore, Poland should work on being more prepared in the future. Reliable, honest, and non-ideologized historical research is of crucial importance here because it provides unquestionable arguments. Russia has worryingly mastered the techniques of information warfare and is a demanding adversary, and its lies may concern issues that until now seemed unmistakable and unquestionable to us. The presented example, however, shows that Poland is not defenseless and can effectively respond to hostile disinformation. The firm reaction of the Polish government and its activity in the major media around the world reminded the public who was responsible for the hecatomb of World War II. What particularly deserves attention is the unified reaction of the allied states within NATO and the EU, which have clearly supported Poland. As such, what will be the next goal of Russia’s information warfare?