On December 21, a telephone conversation took place between the General Secretary of the Chinese Communist Party (CCP) Xi Jinping and the new Chancellor of the Federal Republic of Germany Olaf Scholz, who took office on December 8. Both leaders expressed their desire for further cooperation. So far, Germany has taken a very diplomatic approach to the talks given its previously announced tougher rhetoric towards Beijing. 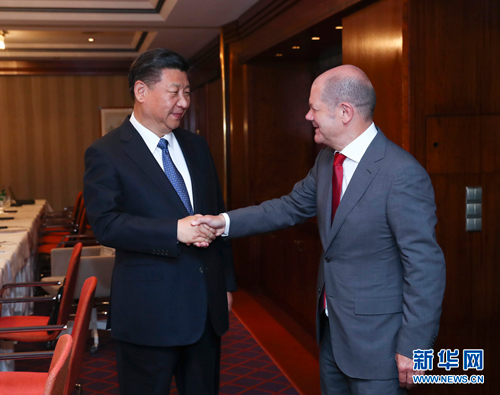 Xi pointed out that China has gained a lot from the cooperation. The PRC has been Germany’s largest trading partner for five years while economic cooperation continues to grow. According to him, the two sides should actively explore new areas for future cooperation, such as new energy as well as green and digital economy. Germany is an important hub of the China-Europe Railway Express while cooperation under the Belt and Road Initiative will benefit all countries along the route. According to Xi, the two sides should increase coordination and cooperation in international affairs. Moreover, he hopes that Germany will continue to play a positive role in stabilizing China-EU ties.[i]

Significantly, there was only a brief statement about the conversation on the German government website[ii], but there was no post about this event on the official social media accounts (Twitter and Facebook). According to the statement, the conversation was devoted to deepening bilateral partnership and economic relations, developing EU-China relations, as well as international matters.[iii] The Chinese provided more insight on Scholz’s remarks. The German Chancellor was said to have listed three pillars for the sustainable development of Germany-China relations: climate change, COVID-19 pandemic, and close communication on regional issues, such as Afghanistan and Iran’s nuclear program. Moreover, he allegedly hoped that the EU-China Comprehensive Agreement on Investment (CAI) would enter into force as soon as possible.[iv] Interestingly enough, this goes against the coalition agreement, according to which the CAI, pushed by Angela Merkel, cannot be ratified at this stage. Scholz’s office did not respond to the question whether the information provided by the Chinese is true. What is more, both statements did not cover human rights issues.[v]

The new German government may be problematic for the Chinese authorities. It pays more attention to the human rights and China’s expansive foreign policy. Scholz attempted to leave these issues out of the conversation, but most probably they will return to the agenda, for instance, in the form of comments on events.

The former German Chancellor Angela Merkel faced accusations of not sufficiently criticizing Beijing’s approach to human rights and other contentious issues. In May, the European Parliament suspended the ratification of the long-planned CAI between China and the EU, which the former Chancellor had attempted to get passed at the last minute. The authorities of the PRC are still encouraging European authorities to change their minds and adopt the Agreement. However, the current political climate in Germany and the EU gives little hope that the decision will be changed. It seems that pragmatic economic cooperation will continue to be developed while economic and industrial ties will offset the bickering.