Lviv Mayor Andriy Sadovyi, the leader of the Self-Reliance Party (Ukrainian: Samopomich), is carefully preparing for his start in the presidential election in 2019. In Washington, he has met with Kurt Volker, the U.S. Special Representative for Ukraine Negotiations of the U.S. Department of State. 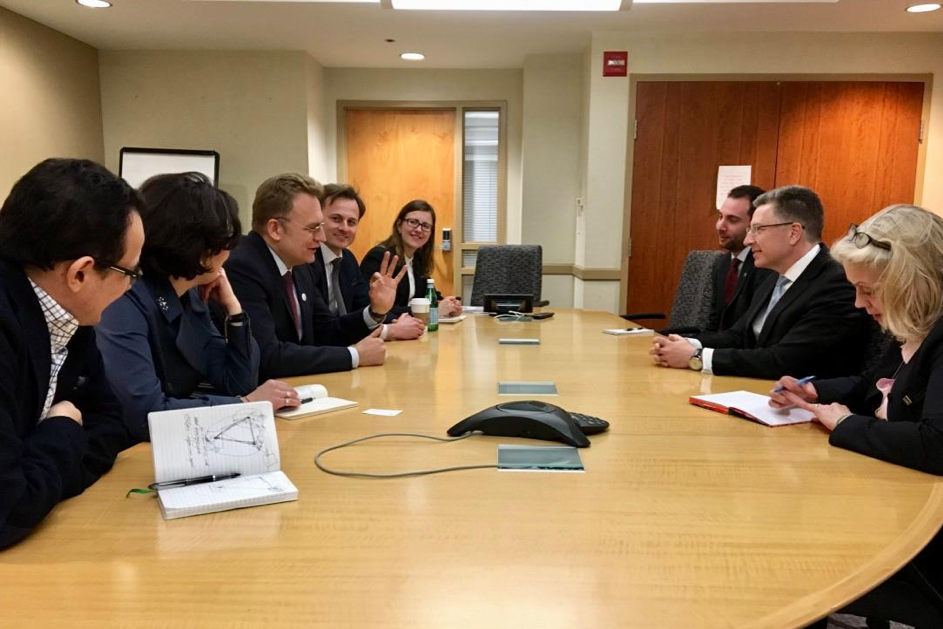 He was accompanied by Deputy Chairwoman of the Verkhovna Rada of Ukraine Oksana Syroyid and two representatives of the Self-Reliance parliamentary faction in the Ukrainian Parliament: Chairman Oleh Bereziuk and People’s Deputy Serhiy Kiral.

“We wanted to present our viewpoint on key issues regarding Ukrainian-American relations to Mr Kurt Volker, which is difficult to do during his visits to Ukraine. We wanted to focus Mr Volker’s attention particularly on strategies for the fight against Russian aggression and the implementation of reforms. Today, the United States is considered to be Ukraine’s main ally. Not only does it help us in the war with Russia, but it also plays a key role in supporting the reform process in Ukraine. The US support is especially valid in our efforts to establish an anti-corruption court and to further the development of civil society,” Sadovyi said after the meeting. Volker’s views on the situation in Ukraine, according to the Mayor of Lviv, is the case in which the interests of the United States fully coincide with the national interests of Ukraine.

During his stay in the USA, Sadovyi also met with the representatives of the Ukrainian diaspora and announced that a draft law to grant Ukrainian emigrants Ukrainian citizenship will be submitted to the Verkhovna Rada. Apart from that, the programme of meetings included visits to the World Bank, the International Monetary Fund, the German Marshall Fund and a meeting with the Mayor of New York City, Bill de Blasio.

Sadovyi belongs to a group of prominent politicians of the younger generation who has a chance to take over responsibility for Ukraine in the next presidential election. His path to politics at the national level has been paved by quite a number of wins in local elections. Thus, he has got democratic experience in local government. The visit to Washington has proven that he is able to build support for his own political agenda. He has got many supporters in Ukraine, not only among people who are disappointed with the prospect of choosing between Petro Poroshenko and Yulia Tymoshenko. The problem is whether the oligarchic system will allow for such a far-reaching experiment and whether it will allow the Mayor of Lviv to take part in the upcoming presidential election.