Ukrainian oligarch Viktor Medvedchuk has for years been the number one figure in the pro-Russian political wing in Ukraine. Ukrainian authorities had already charged Medvedchuk with treason last year and placed him under house arrest. After Russia invaded Ukraine, the mogul escaped but was detained by Ukrainian counterintelligence officers. He must know a lot about Russian plans of a military invasion of Ukraine. But will he be willing to cooperate? One is certain: by capturing Medvedchuk, Ukrainian operatives dealt a blow to Russia, Putin, and the FSB. 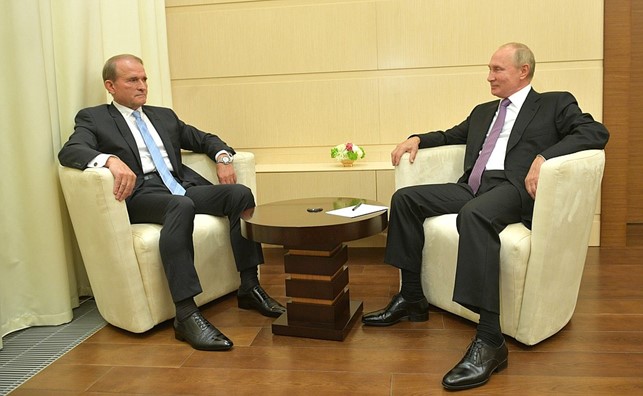 In May 2021 he was charged with “high treason” over accusations of attempting to steal assets from Russia-annexed Crimea. He was later again charged with treason and illegal coal supplies from separatists republics in Donbas. Shortly after Russia invaded Ukraine, the mogul escaped from his house arrest. Ukraine’s security services on April said they had arrested the fugitive oligarch. Wearing camouflage fatigues with a Ukrainian flag patch, the pro-Russian tycoon was trying to cross the border with Moldova’s breakaway region of Transnistria. Medvedchuk was captured by Ukraine’s security services while trying to flee the country after escaping house arrest. His safe house was reportedly near the capital city of Kyiv. He was accompanied by what appeared to be real Ukrainian law enforcement officers. Ukrainian authorities said the court had seized 154 assets belonging to Medvedchuk and his wife, Oksana Marchenko. They include houses, apartments, plots of land, and a yacht. Authorities said they also identified and seized shares of capital in 25 companies owned by either Medvedchuk or his wife, Oksana Marchenko. Medvedchuk was a leader of the pro-Russian Opposition Platform – For Life party, which was banned following the invasion. The Ukrainian politician is a close ally of Russian President Vladimir Putin, who has been the godfather of Medvedchuk’s youngest daughter since 2004. The godmother is Dmitry Medvedev’s wife. In addition to being Putin’s close ally, Medvedchuk owns millions of dollars worth of assets. He was a media and energy tycoon. In a presidential order announced in February 2021, Volodymyr Zelensky imposed sanctions on channels 112, NewsOne, and ZIK. Medvedchuk is a long-serving politician with some murky Soviet past. Medvedchuk also had notoriety in Ukraine for his role as the Soviet state-appointed defense attorney for the Ukrainian dissident poet  Vasyl Stus, who died in a Soviet labor camp five years later. From 2002 until 2005, Medvedchuk served as head of President Leonid Kuchma’s presidential administration. He was considered a “grey eminence” at that time. After the Orange Revolution, Medvedchuk continued to operate from the shadows during the turbulence rocking his homeland. Eventually, he bounced back to the center of the political stage in 2014 after Petro Poroshenko came to power. Back then, his companies won a 40 percent share in the Ukrainian LPG market and control of the major pipeline carrying diesel flows from Russia to Ukraine. Former president Petro Poroshenko made Medvedchuk chief negotiator with representatives of Russia-controlled members of militarized groups in the Donbas during a round of peace talks in Minsk. He was relieved from this post by Volodymyr Zelensky. Medvedchuk’s Opposition Platform – For Life score well in the latest general election and became the second-biggest party in the Ukrainian parliament. His party won most of the voters and politicians from the former Party of Regions. In 2021, Medvechuk’s party challenged Zelensky’s Servant of the People party in polls.